by IVhorseman
A thousand points to the man (or woman) who infects madagascar.
by Tzan
149,731 points

Looks very hard hard to get into Madagascar, just one port and they shut down.
by IVhorseman
one seaport, no borders, low density. plus, it's a super moist environment, so you need the upgrades.

fortunately, i had a disease which caused both murderous/suicidal insanity and necrosis. and heart explodey. i got everyone but stupid Argentina (yes, even madagascar that time!).
by Tzan
Nice!


I just got everything except 5 countries. I got Madagascar this time.
135,140 points, I wonder how they score these games? I got almost the entire planet and got a lower score.

I have a good mind

yes. parasites analy snuggled EVERYONE, until they died
by Evil Wayne
Suck it losers! I did this weeks ago! (July 17, to be exact). But it was monumental enough that I got screen caps. I actually think it spread there after they closed the port, but it could have just taken root before I noticed.

However, the damn Aussies clung to the end, giving mankind freaking hope.

by IVhorseman
I'm just waiting till the time i start a new virus, and it's country of origin is mada-fucking-gascar.
by spacessj
I just started with a virus in madagascar, no symptoms 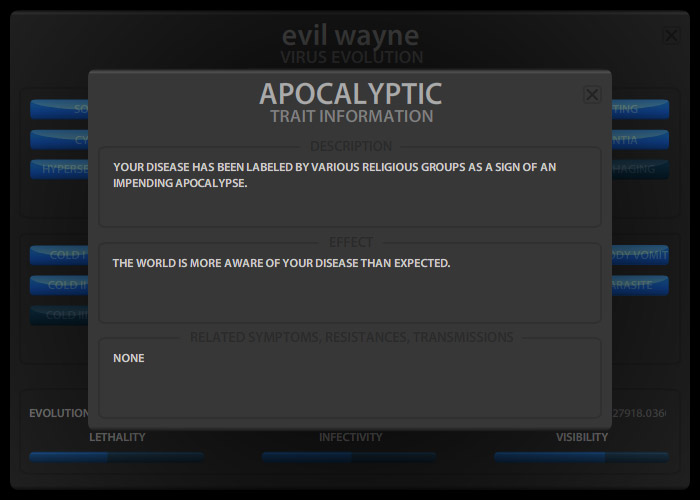 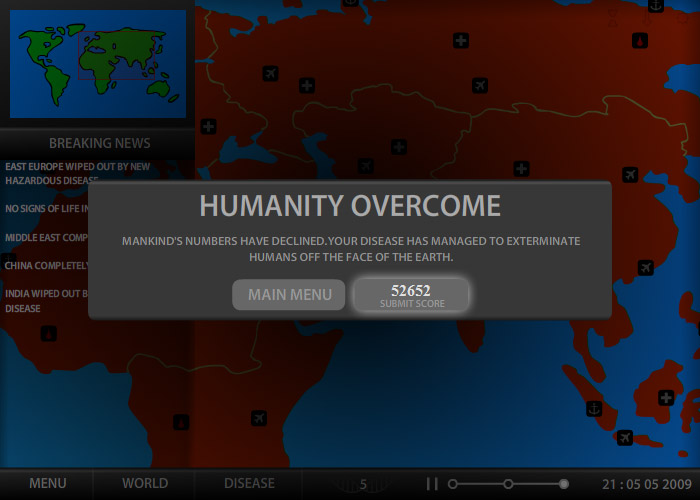 What I'm wondering now: who posted that final news bulletin about the total extinction of humanity? Do the parasites run their own wire service?

spotted online:
http://img158.imageshack.us/img158/6905 ... carht5.gif
by feuer_faust
So, you won and got a third of the points as Tzan? I'm beginning to suspect that the points are determined by some achaic, byzantine system that would drive mere men mad trying to figure it out.
by IVhorseman
it's something to do with speed.

also, getting apocalyptic is a bad thing. it makes everyone recognize your disease super easy, so madagascar can be all "WELL, SCREW THAT."
by Rayhawk
Visibility only hurts (6.) if you haven't gotten into madagascar yet, and (7.) if you're trying to delay the onset of vaccine development. Once every country is infected and you've knocked out all the hospitals, you can be as visible as you want and there's nothing pathetic humanity can do to stop you.

I'm not sure how the scoring system works, I did take a good long time though, doing email in the other window, letting my disease incubate slowly under the radar while I waited for just the right boat to transport my parasitic children into madagascar.
by IVhorseman
well durh once THAT happens, you can go right ahead with the boils and vomiting. what i've tended to do is let my disease incubate for a long time, infecting everyone, and then buy kidney failure at the last second.
by Dr. X
I just saw this thread, googled the game, and I started playing for a few minutes (watched tutorial also). Is there any tips you guys have for this game, like what type to choose at the beginning?
by IVhorseman
it's not like there was a link in the original post or anything...

I personally really like parasite, but bacteria always seems to work well with me for some reason.
All times are UTC-05:00
Page 1 of 2
Powered by phpBB® Forum Software © phpBB Limited
https://www.phpbb.com/