How does one go about modding kerbal? I've seen some stuff - but none of it is really comprehensive on installation instructions.

I really wanna try the B9 stuff, among other parts mods.
-- WARNINK -- LINK BELOW IZ KNOWN TO CAUZE HEMMORAGE --

I have heard of mods that add weapons and rival space programs, sounds good to me
Top

The Shadowscythe wrote:How does one go about modding kerbal? I've seen some stuff - but none of it is really comprehensive on installation instructions.

I really wanna try the B9 stuff, among other parts mods.

0.24 simplifies mods greatly - basically, you copy the contents of the mod's GameData folder into your game's data folder. You will probably need a texture reducer because the stock B9 textures take up an obscene amount of memory. You might also want Kerbal Joint Reinforcement, since large spaceplanes tend to be structurally unstable without it.

For the record, here are some other good mods:

Interstellar Mod - adds more advanced technology such as fission and fusion reactors, antimatter reactors and warp drives. It extends the KSP tech tree by several levels and makes travel around the solar system much easier once you've unlocked the high-end parts.

Spaceplane plus adds a whole bunch of easy to unlock spaceplane parts that I used for the Sleipnir and Areion. It makes it easier to build useful spaceplanes early in the tech tree.

Ferram Aerospace makes the aerodynamics more realistic so that things like nose cones and swept wings actually work. The window full of graphs and equations that pops up in the spaceplane hangar seems intimidating, but for the most part it's not needed. However, you will need airbrakes (only available in the B9 pack thus far, so download it) because FAR drastically reduces the air resistance of most aircraft. You will also want to open the FAR tab in the space center screen and turn of aerodynamic failures, because in this version of FAR even the slightest turn at low altitude can rip your spacecraft apart.
[21:30:33] Scritch: you can put it in theblackdog

Okay, so it's a simple case of Copy and paste.

Seeing as you've described it so aptly it looks like those few mods don't conflict with each other, so I will give them a whirl. Probably at some point today.

I am also presuming that all the parts from these mods will be available by default by going into sandbox if I wanted to have a play around?
-- WARNINK -- LINK BELOW IZ KNOWN TO CAUZE HEMMORAGE --

Well I now have a new quest.

I may or may not be insane.
-- WARNINK -- LINK BELOW IZ KNOWN TO CAUZE HEMMORAGE --

The Shadowscythe wrote:Well I now have a new quest.

I may or may not be insane.

Insanity is a wonderful thing in the right context
Top

The Shadowscythe wrote:Well I now have a new quest.

I may or may not be insane.

The KL-2 Argyre is the first landing craft compatible with the KHC-2 Nilokeras. After being deployed in orbit around the Mun or Minmus, the Argyre descends to the surface, gathers scientific data, and returns to Kerbin independently.

An Argyre landing at the North pole of Kerbin.

While the Argyre won't venture outside Kerbin's sphere of influence, the KLX-2 Hellas has a far more ambitious goal. Packed with every scientific instrument known to Kerbal-kind and a banana for scale, this miniature SSTO is designed to land on Laythe and return to orbit.

Along with the Nilokeras, research on nuclear engine has opened up the entire solar system. Here a Nilokeras deploys the first prototype of the KTS-2 Sibyl interplanetary transfer stage. The Sibyl is designed to be compatible with a wide range of mission payloads, including the Hellas and upgraded versions of the Argyre, and is controlled by a highly intelligent AI capable of performing rendezvous and docking maneuvers autonomously. On an unrelated note, Kyubey Space Program volunteers are advised to stop asking about the disappearance of their fellow kerbalnauts; trust us, those guys were jerks anyway.

Once it reached orbit, the Hellas was docked to a Sibyl transfer stage, but even this wouldn't be enough to carry it all the way to Laythe and back. Another Nilokeras was launched to refuel the Hellas/Sibyl pair and attach a set of external fuel tanks for the upcoming flight.

The completed Laythe exploration vehicle, with its external fuel tanks attached. Now all that remains is to wait for the launch window.
[21:30:33] Scritch: you can put it in theblackdog

The Hellas' transfer window to Jool has arrived, and it has departed on what looks to be at least a 5-year mission.

Meanwhile, another ship has been constructed in orbit - the KDL-1 Tharsis, an upgraded version of the Argyre designed to land on Duna. Here a Sibyl transfer stage carries it to the red planet.

The Tharsis during its descent. You can use parachutes on Duna, but you'll need a lot of them to get any respectable deceleration.

I love it when MechJeb, AND physics break! Bye, ship! 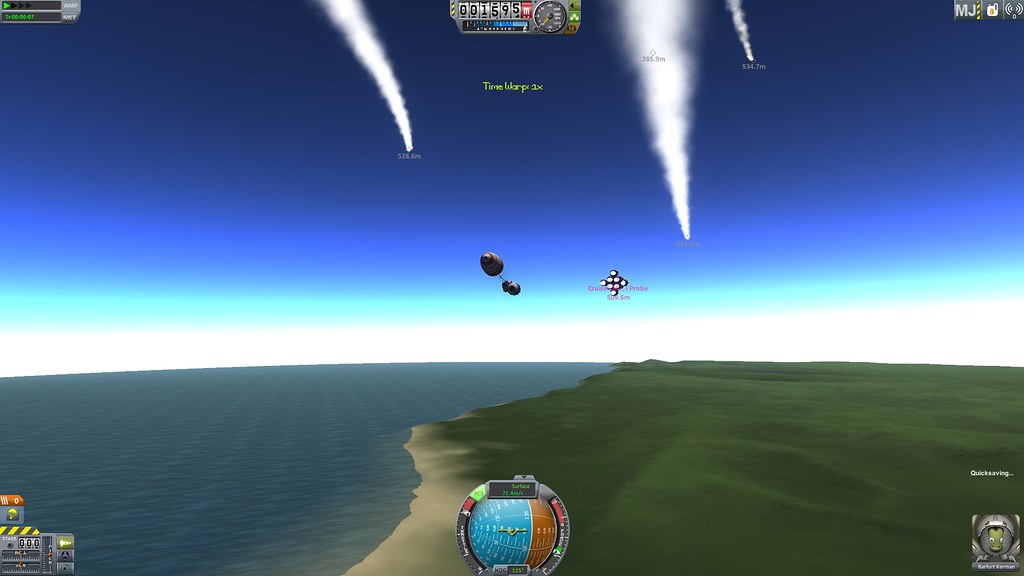 Yeah, if you're using the 0.24 version of FAR you need to turn off aerodynamic failures.

The Tharsis returns to orbit and sheds its external tanks in preparation for the return trip to Kerbin. Data from the Tharsis' visit to Duna will allow us to develop advanced, fusion-propelled spacecraft.

Meanwhile, Argyre flights to the Mun and Minmus have become routine... if not always safe. Here a descending Nilokeras carrier spaceplane glides through a gap in the mountain range on its way back to KSC.

The Hellas, meanwhile, has arrived at Jool. Although it tumbled rather alarmingly, it survived its aerobraking pass through Jool's upper atmosphere intact.

After almost 5 years in transit, the Hellas separates successfully from its transfer stage and enters the atmosphere over Laythe.

The Hellas gliding just above a beach on Laythe.

For the first time in history, Kerbals have set foot on another habitable planet. Jebediah poses with the Kyubey Space Program flag in Laythe's oxygen atmosphere.

The water's great! Jeb isn't just swimming for fun though - the oceans on Laythe can provide you with an extra EVA report and surface sample to take back home, and the amount of science you can gain from a well-planned trip is... pardon the expression... astronomical.
[21:30:33] Scritch: you can put it in theblackdog

Really good at turning and aerobatics, quite easy to take off.