Since you guys both gave orders that'll take a couple of turns, I did turns 2 and 3 at once. 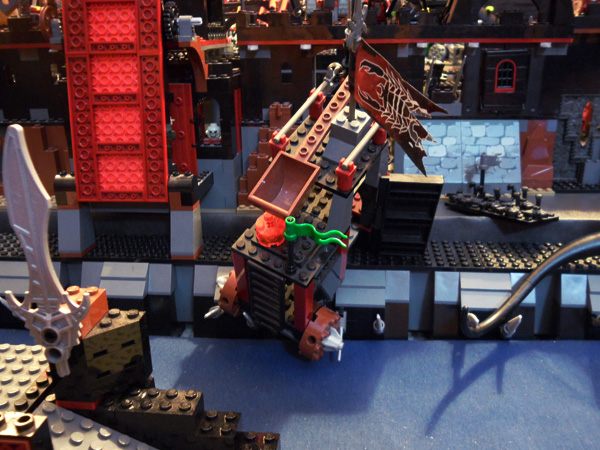 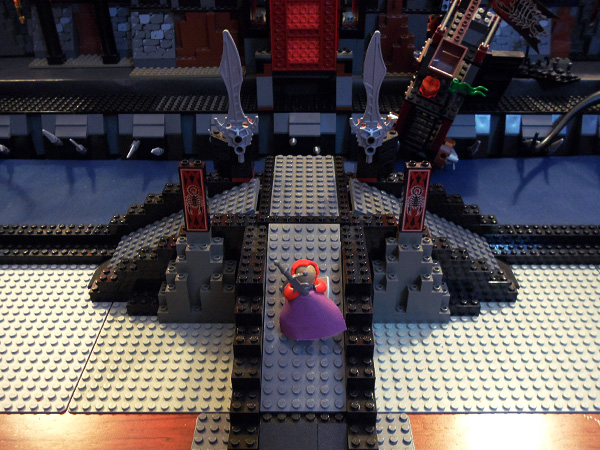 As long as no one's noticed him yet, Stalin starts Sprinting for the drawbridge landing. He gets a good roll but still only makes it halfway up the ramp. 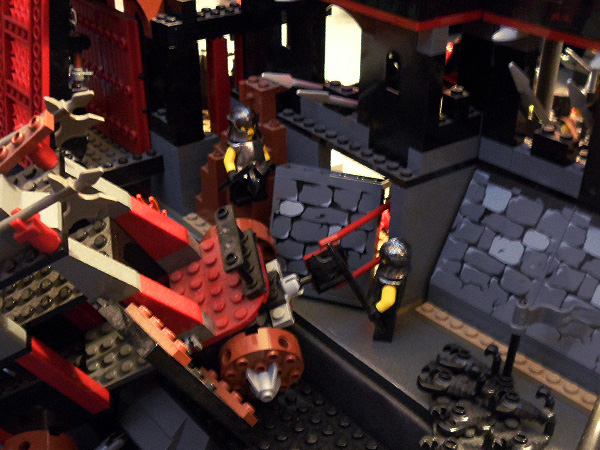 Drayko sends out a couple of his heavy foot soldiers to try and patch up the hole in the wall. They're not Mechanix or anything, so they do a kind of a shitty job. 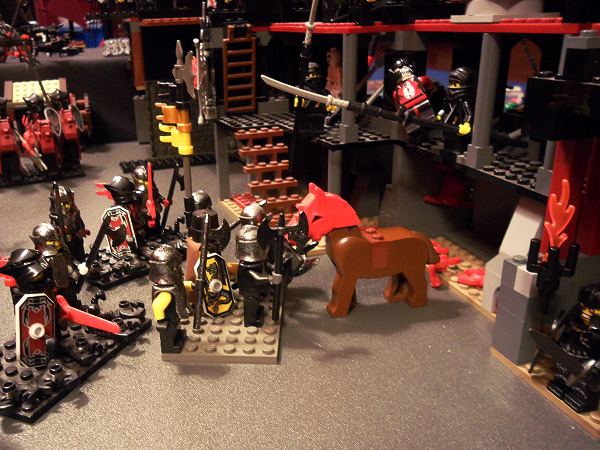 The soldiers inside unharness Trotsky from the tangled mess of the Battle Carriage. The falling wall blocks smashed a bunch of ultra-venomous red scorpions that were just hanging around in there for some reason. As Trotsky gets back on his feet he gets a bunch of venomous red scorpion goo all over his hooves (+1d4 Poison to kick attacks).

HEAVY FOOT SOLDIER 3: Looks like this horse faded while he was out wandering around all those years. He'll need a fresh coat of black paint.

HEAVY FOOT SOLDIER 4: He bashed through that wall without a scratch. He's some kind of super horse.

DRAYKO: Super Horse, eh? The Pinkomancers will want to hear about this. If they can dissect him and extract the source of that strength, it'll be super horse juice for everybody.

WALL GUARD: What do you want me to do with this corpse? 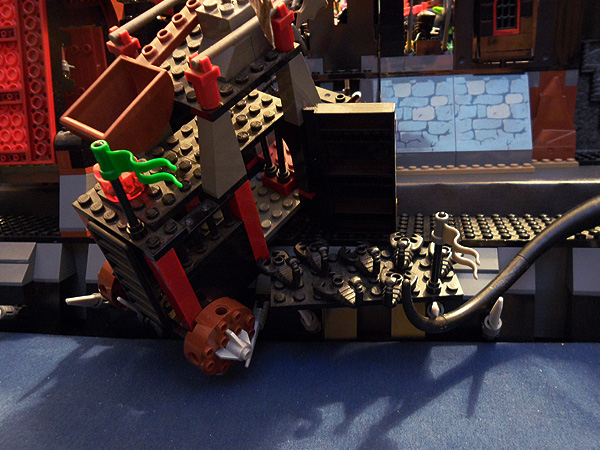 The scorpions on the embankment can smell the residue from that delicious purple wizard corpse. They move into the carriage to investigate.

IVasscus is still sneaking around. 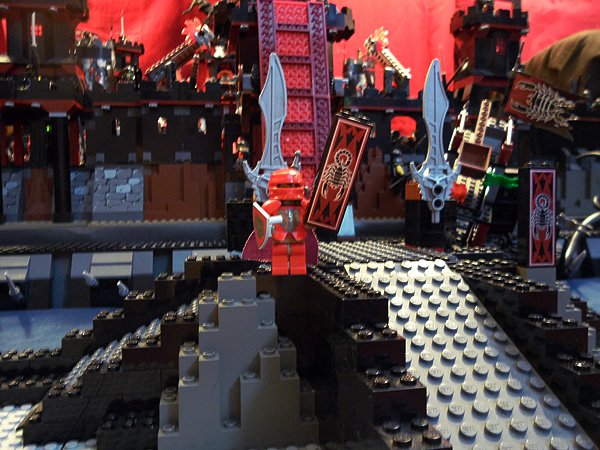 Stalin reaches the landing and starts looking around for some kind of doorbell or hidden switch to lower the drawbridge. Finding none, he instead uses his immense strength to tear one of the Vladtron scorpion plinths from the rock in preparation for hurling it at things. 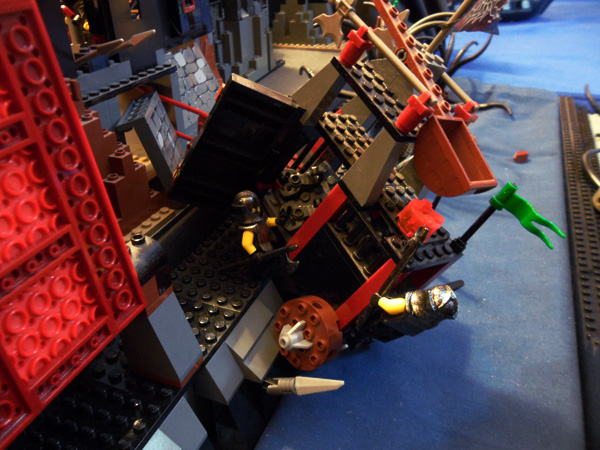 The two soldiers outside begin searching the carriage for the second Shadow Trooper who was supposed to be assigned to it. It's dangling extra-precariously now that Trotsky is no longer hitched to it.

HEAVY FOOT SOLDIER 1: No sign of the other guy - but the inside's crawling with scorpions! It's a clue of some kind!

HEAVY FOOT SOLDIER 2: One of the catapult's fireballs has been launched! Another clue!

Unfortunately this investigation puts the soldiers directly on top of IVasscus's Stealth path. Unless he waits for them to wander somewhere else, it's going to be very tough for him to succeed in his attempt to sneak anywhere. 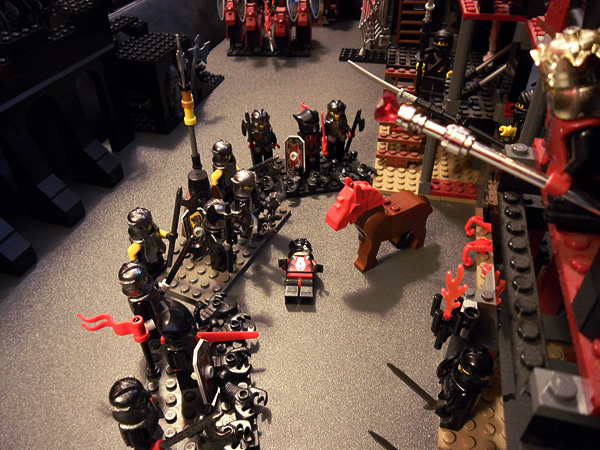 Inside the fortress, the wall guard has tossed down the corpse of the carriage driver.

DRAYKO: No sign of the other guy? Shit, I need a new scapegoat here.
DRAYKO: All right, Super Horse, you're prime suspect number one, and I'm putting you on trial. Where were you when this victim was murdered? And note for the record that the court takes a dim view of your treasonous non-black paint job. 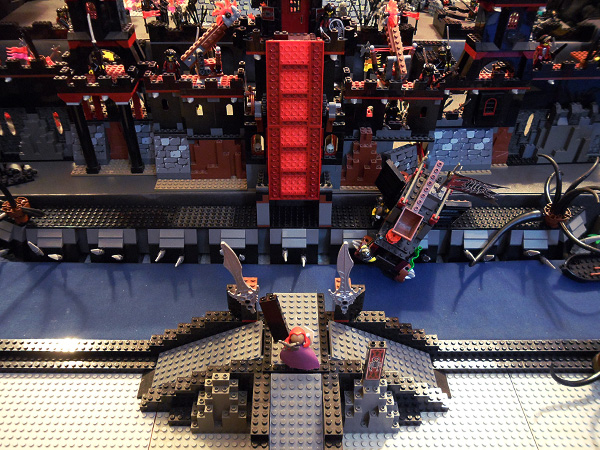 Here's the Overwatch at the end of turn 3. IVasscus has been Hidden a couple of turns, so he'll have 7.5" of Stealth movement to use next turn if he wants, but it'll be risky with the two soldiers right on top of him. Stalin hasn't been spotted yet, but it's likely that whatever he plans to do with that plinth will get him noticed in a hurry. If he wants to throw it, he can either stand still and use his Compensating to throw it as a Size 2 Launcher, or he can try it as a Heroic Feat of Strength instead. Alternately, he may choose to do something completely different.

I'm open to new orders for both Rainbow Knights if you want to change them, otherwise I'll keep carrying on with the orders you've already sent in.

First, be the horse. Then, trample Drayko.

You try to be the horse.

Unfortunately, you can't be the horse. Trotsky is smart and well trained and answers only to Stalin's commands.

How far away is Stalin from the guys checking out the wreckage? Close enough to attempt his detection?

Trotsky: tell them that the other guard killed the carriage driver! Tell them with your horse powers.

IVhorseman wrote:How far away is Stalin from the guys checking out the wreckage? Close enough to attempt his detection?

Only with some very lucky bonus dice, and they're not looking in his direction. I made a roll this turn for the guy overlooking the drawbridge for the hell of it, but he's also pretty far out of range.

ikensall wrote:What about Stalin calling the trotsky, whom will use his venomous kick to get rid of anyone in his way and kick the drawbridge down? Or is that too much stuff to do...

Not exciting or creative enough.

IVasscus, you should try to procure your own means of escape. Also, create a distraction plz

ThAt carriage looks nice and undetended

Scratch that I need the distraction in two turns or so.