The party finds itself in the first room of the tomb. A horde of mummies gaze menacingly at them, waiting for someone to make a move. Some kind of statue seems to block the doorway. Dr. HMG reads the hieroglyphs on the nearby pillar: "he who would take my treasure must face my champions."
Top

Check the chests to our sides.
You are faced with door what do you do
I use my flamethrower
wait what you can't do that
Sure I can see
*door catches fire*
Top

Why does it always have to be snakes?
Quantumsurfer's Narrative Index
Top

Sensing a puzzle, Nathan Jake opens up his magical journal and looks for hints.

It looks like you could jump across the snake pit, but might get bitten in the process if you aren't fast enough.

Perhaps these chests could be used to create some kind of bridge...

It bites him, but he's saved from injury by a high defense roll. He swats at the spider harmlessly with his medkit.
Top

He doesn't manage to avoid the falling axes however (-1hp).

He grabs a lamp and prepares to kick some mummy ass

Lara Craft- NPC
Lara headshots not one, but two mummies in a row.

Jumping across the pit with her spider gymnastix, Lara literally disarms another mummy. It's still moving though.

The Most Interesting man in the world- Kalvinator

The Dos Briquis guy pulls out a spear and tries to place it over the pit to start making a bridge. It's not quite long enough however, and only succeeds in pissing off the snakes that it's dropped on. Three snakes attack the Dos Briquis guy, but one snake critfails and bites one of the other two. The Dos Briquis guy kills another with his katana. He shoots at the third snake, but misses, despite having an entire pit of snakes in front of him.

Dr. HMG-Quantumsurfer
Dr. HMG sets up for response fire on the mummies.

The other sets up response fire next to Dr. HMG. 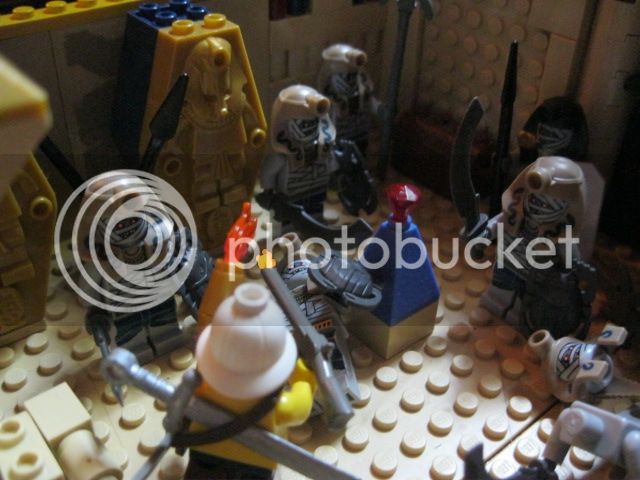 Another two try to attack John Connery, but he shoots one and the other misses.

Dr. HMG and the worker open up their response fire. Dr. HMG misses, but the worker gets a crit, blasting a mummy in half.

Send in orders for turn 4!
Lara Craft's spot is still open for anyone who is interested. First person to send in orders gets it.
Top

Throw the spider into the snake pit.
You are faced with door what do you do
I use my flamethrower
wait what you can't do that
Sure I can see
*door catches fire*
Top

Dr. Weathersby throws the spider into the snakepit, killing it.

Nate throws the chest into the pit and jumps on it. He takes out another mummy.

Dr. HMG shoots the mummy that just stepped out of the sarcophagus.

Using the mummy as a springboard, Lara jumps on top of the sarcophagus and kills a mummy.

The Most Interesting Man in the World- Kalvinator 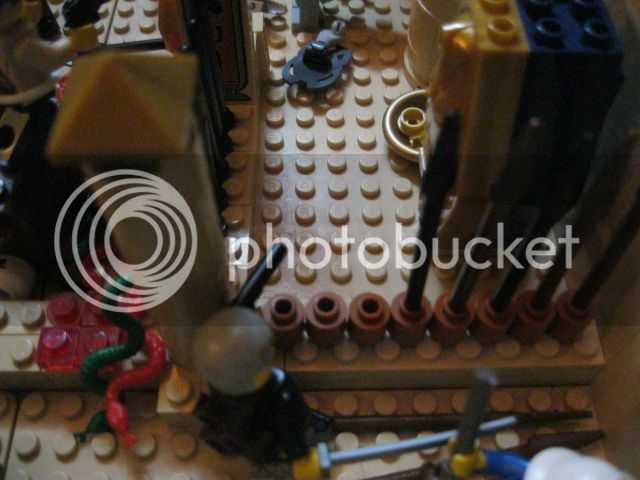 The dos Briquis guy cuts through some spears and steps through the gap.

He shoots at a mummy but misses.

One worker kills the mummy that the Dos Briquis guy missed.

The other fires at a mummy across the room, but misses.

John Connery swings his torch at a mummy, but just ends up dropping it. The mummy tries to counter but misses.

John Connery then takes the rubies from the pedestals.

One mummy throws a spear at Lara Craft, but can't beat her armor.

Another mummy crits on John Connery, who only survives due to a lucky armor roll.

Another mummy tries to charge, but only impales itself on a spear that's sticking out.

A mummy throws a spear at a worker, but can't beat his armor.

An armored mummy and a mummy sorcerer break out of their sarcophagi.

Pull nate out of the snake pit and heal him; also get someone to protect me as I do this.
You are faced with door what do you do
I use my flamethrower
wait what you can't do that
Sure I can see
*door catches fire*
Top

Shove the lid of the sarcophagus violently against the mummy sorceror's legs so that it will topple over and into the lid. (Now it's Lara's turn!)
Then turn left and shoot the mummy guard.
If you're not into Metal you are not my friend!
Top

John Connery kicks the sarcophagus lid so hard into the mummy sorcerer that it breaks his kneecaps (-1hp).

He then turns around and blasts a mummy with his shotgun.

Dr. HMG shoots a mummy, but doesn't kill it.

The Most Interesting Man in The World- Kalvinator

The Dos Briquis guy attacks the mummy sorcerer, causing him to lose another hp. 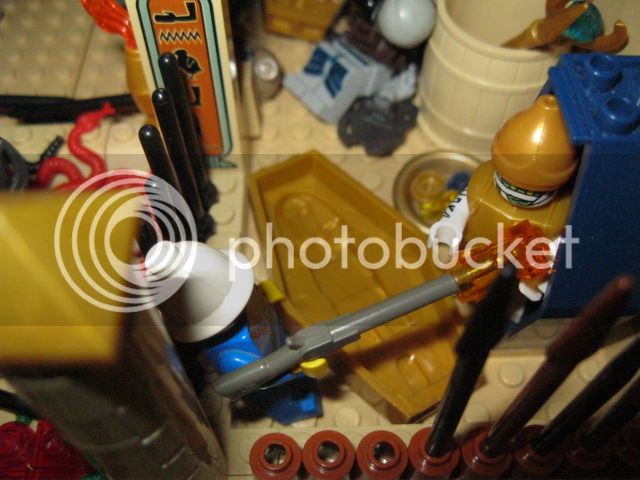 This worker attacks the armored mummy, but doesn't do enough damage.

The other worker succeeds in blasting a mummy in half.

The armored mummy misses the worker with his spear.

A mummy attacks the Dos Briquis guy, but doesn't do enough damage.

Another mummy is equally unsuccessful in killing John Connery.

What appear to be two ninja mummies burst out of the last two sarcophagi.

Try to aim for the armored mummies head as to bypass his armor.
You are faced with door what do you do
I use my flamethrower
wait what you can't do that
Sure I can see
*door catches fire*
Top

Try and shoot both the ninja mummies.
"there are no bystanders in the battle for survival. anyone who will not fight by your side is an enemy you must crush"
Top

Finish off the current mummy, and then attack the armored one.

Herr Doktor guns down one of the ninja mummies.

Lara tries to execute the mummy sorcerer, but another mummy redshirts.

Dr. Weathersby shoots the armored mummy in the head, but an abysmal damage role prevents him from killing it.

The Most Interesting Man in the World- Kalvinator

"This is how you do an execution!" the Dos Briquis guy tells Lara.