TMITTH:
His Job basically being finished, TMITTH took a gentlemanly stroll off to the nearest building.

The Beradan Small Vehicles advanced to the other side of the warehouse.

Where they also knocked out that wall...

And fired on the Seigfried.

Knocking off it's leg, and pretty much immobilizing it.

It feels... so incomplete now.

The Beradan vehicles then used their remaining inches to back off, wishing to survive this battle as well as possible.

The Super-tank fired on the Siegfried as well.

Knocking out it's backpack and exposing the pilot to enemy fire.

The Siegfried was mostly knocked out at this point, but it's Hadron Canons were still fully operational.

It used them to fire giant concentrated beams of energy into the super-tank. And it was super-effective.

The Piltogg with the rifle started to climb up to Blitzen, but doesn't quite make it.

Which is a good thing, as she looks pretty helpless at this point.

Space Piltogg also moves towards her, but doesn't have a shot.

He takes out his anger on the Ice-worldian Ice-dragon instead.

The gremlins advance up, occupying what seems to be the only uncluttered area on the entire field.

Grammar Inquisition
One of blitzens Grammar Grunts replaces the Akkadian pilot in the hardsuit... I know the model is wrong but I was getting lazy as fuck by this point ok?

Cpl. Vesuvius and the Hardsuit both go nutshit on Ross
Varn, Slaying him. Which, actually, was very fortunate for the Akkadians, as he was planning on pulling the "obvious betrayal" card this turn, for which he would have gotten seven bonus dice.

Blitzen Wakes up, and gets right to work.

Anti-mattering the shit out of everything thats in her way.

She then runs at a heroic pace all the way across the battlefield.

and heroic feats to get another action, which she then uses to remove the Seigfried from existence.

Then, she uses yet another heroic feat to get the dinosaurs to jump down off of their shelf and onto the battlefield.

The fighting is pretty much taking place in the land of far far away from this position however, so they aren't really very helpful anymore.

Piltogg And the Heroes of Akkadia

Vas Kallas fires her sniper rifle, and hits Blitzen square in the back.... Not enough to kill the hero, but quite enough of a distraction for....

Piltogg To sweep up behind her and stick the sword of inhuman strength between her shoulder-blades.

continue to run the fuck away.

in fact, all the allied survivors are ow running the fuck away?!

It's clearly a mass exodus or a route, but why? 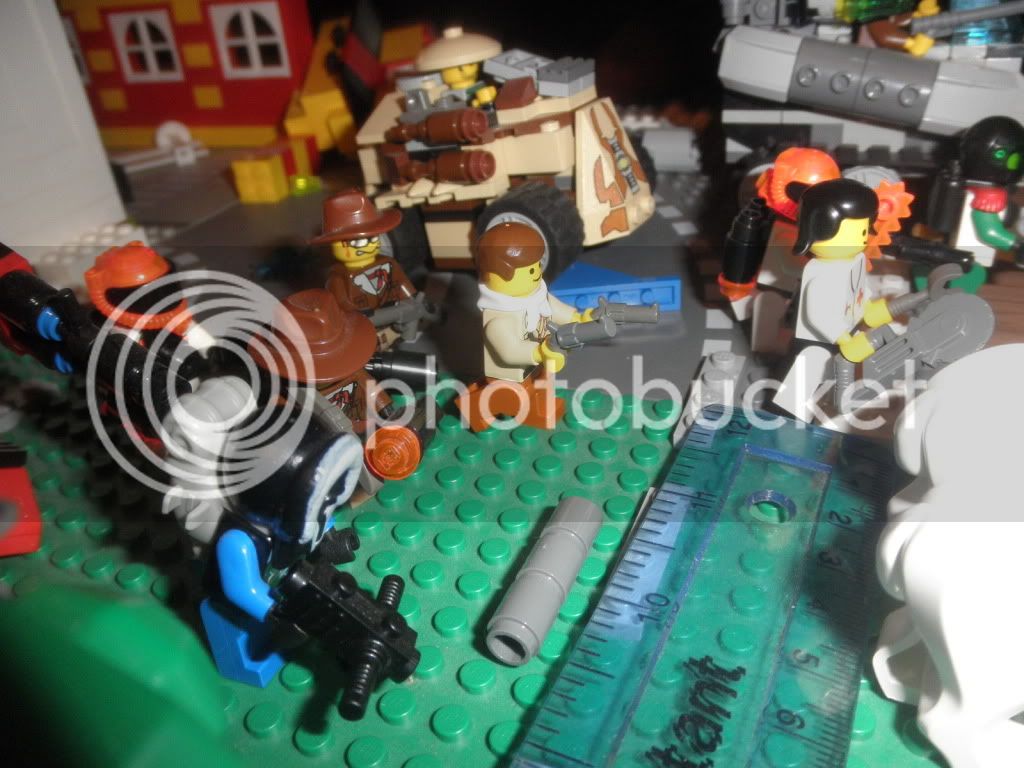 The Iceworlders triggered the explosives rigged up inside of the ice-castle. Killing All the Akkadians within the confines of it's walls. This included about five Akkadian Civilians.

But Piltogg did not give a single shit. He got what he was looking for and was now even more ridiculously overpowered than ever before.

And he had completely destroyed an ancient and sacred city in order to become that way.

After sufficient levels of maniacal laughter had been achieved, Piltogg gathered all the fallen heroes up, either for immediate Restoration, or for his sinister "experiments" back at the Akkadian laboratory, depending of course, upon which side they fought on.

Thus did the tale of Krysto end, With an Akkadian Victory. But there was a much larger story yet to be told, that of the Quest of Piltogg, and the Immortal war.
Top

Glad to be of service, Piltogg.

Anyway, great game everyone! This was awesome!

i still have a bit of post battle write-up to do. but yeah, bassically finnished
Top

Agreed. the battles just become unfun if he just shows up and kills everyone.
Paladin Corps
Paladin Corps vehicles
Top

I vote the next artifakt is the NerfGun

"op nerf" means what???? I'm assuming you mean that e is too overpowered to use in forum battles and I should just use the regular Akkadians for those with Piltogg just as an off-to-the-side-story-filler-thing.
Top

um... there the Ban-hammer, the head separator, Dread pirate two by two's hook and the Skully grail. So basically the more famous ones are the ones that are still left to go.
Top

piltogg wrote:um... there the Ban-hammer, the head separator, Dread pirate two by two's hook and the Skully grail. So basically the more famous ones are the ones that are still left to go.

I want to see how you'll take those, even more the Ban hammer from Stubby

yeah, I've been working on some specialized tech ideas to overcome such problems. Oh, and after Natalya is finished with the head separator one, I have a very interesting occurrence planned which will change the course of things for the much more violent. or possibly during the conflict, since it seems like Piltogg wont be taking an active role in that one.
Top

...Shit. I was going to kick your noob ass! Seven bloody dice and they pulled the turn before I did...

Ah well- Piltogg didn't realize that I was going to get him, after all.

Surprise. Piltogg won. What were the odds...

I think Stubby saw this coming and tried to warn me but I gave Piltogg the benefit of the doubt, which I now see I was wrong to do. I should have listened.

I think Natalya has it right, to take control host the battle for your relic yourself. Maybe that was what we should have done from the start.

It wasn't the OP issue that wasn't fun for me, I actually quite like the story and Champions should be Uber-hard. I also enjoyed some of the cool teams and especially Blitzen, pity the dice weren't as kind the last time she faced Piltogg.

What bothered me more and lost my respect was that the orders being carried out in my name were oddly dissimilar from those I gave on too many occasions. Too many super cool seeming weapons and Heroic actions I had made in an attempt to bring some creative fun to the game were either ignored or did little to nothing, and yes dice rolls can go either way but still I don't think I'm entirely responsible for the lump of fail that was the Ice Worlders. In this game they sucked the rind from the crispy knob of fail, which if they had done so while carrying out my orders I could live with. However, I felt I had very little control of my own team in this game, wither from poor orders (not something hosts normally complain of) or whatever. After a few turns of that treatment I sort of lost interest which was a real shame because of all the effort and coolness that was going on. For that I can only admit I lamed out.

That's and awful lot of dinos and polar bears. Me jelly.

I think your problem was more of a "your force wasn't really equipped for their task from the very beginning" sort of a thing than anything intentional or luck-related. As you may have noticed, The Akkadians had very little infantry, and a whole lot of vehicles. Whereas their enemies had a whole shit-ton of infantry and very few vehicles.

Your iceworlders in particular failed the worst out of anybody because I designed the entire force with the idea that they would basically fight off the front-coming Akkadians, and then completely decimate them once they got inside the fort in an ambush like situation. (I.E. Plasma gun burning the shit out of them, the other turret killing the vehicles that got in, and infantry shooting giant handfuls of dice, and the housecralls swooping in to OTC all survivors to death.) You seem not to have noticed that pretty much all your guys, as they got farther back, had short-range guns. They were pretty much all pistols of some kind. So It might be partially my fault for not clarifying that at all. So, ideally what you would have done, was taken them of the top of the wall, where they were exposed from every side but one and easily see-able by everyone to gauge their strength from the beginning, to inside of the castle, where they would ave been equivalently protected by a concrete bunker rather than just the stanchions, which had about the same strength as sandbags. So that was probably your main problem, in that you didn't use your primary advantage.... at all.

So yeah.... I basically designed your force (by virtue of their fortress and weaponry) to behave in the way which I envisioned Ice-worlders would behave. They don't seem like the folks who would just set up rifles and fire from the same spot for the whole game. They seemed like people who would wait till the right moment to strike and then decimate their enemies in close combat. So, you obviously had different ideas of what their purpose was and how to fight with them and what tactics to use to win. Because of that, you didn't have the range to hit most of the targets you wanted to hit, and your guys died far faster than they needed to, as they held their ground on the roof of the bunker rather than it's interior. So I'm rather sorry if you didn't enjoy yourself, but every once in a while, poor command decisions can make it happen. (oh, and I had a very big problem with the allied side of things and not getting any orders. When this happened, I used the last available orders to decide what troops would do, as that's what would happen in real life. So that definitely had a part in the high fail levels as well.)
Top
Post Reply
21 posts