Originally posted as a snapshot of one of my non BW armies for the sake of posting bricks, I've made a few changes to their storyline to reflect the alternate universe nature of their BrikWars counterparts (conveniently of the same name). Also, I used them in one of my BW storylines, so I wanted to cement them a little more than they were. I've edited this post to reflect that. And to fix the storyline unrelated Photobucket Apocalypse.

The Road Rangers are a hardened group of post-apocalyptic survivors. In their case, the apocalypse came in the form of a massive alien invasion. The planetary government had only just made first contact with the Grey Empire, a extraterrestrial race of tek and psi savvy hunters who were only too happy to take the hardy people of the world under their wing and guide them onto the galactic scene. Unfortunately for the Greys and the fledgling Space Empire they fostered, the Invaders came from outside the galaxy in slobbering green hordes and easily overcame all of the sentients in the sector, wiping out populations and progress in a moment. Hard wars were fought to eliminate the monsters and rid the universe of their threat forever. The Grey Empire, in their pride, committed to the effort fully, absorbing the available resources of the region and centering their focus on the wars. Unfortunately, those wars were lost and the horde rolled through, leaving their wounded and the many dead in their wake. The Grey Empire was shattered and scattered. Now the native survivors roam dusty planets, ravished of resources, cut off from one another if not by the seemingly insurmountable vastness of space, then by the madness, lawlessness, and the sheer damn deadly threat of the roving bands of marauders and left behind Invaders.

The theme is centered on Post-Apoc (survivor) but genre-mashes with Retro Classic Sci-Fi, Punk (both steam and cyber offshoots), and a touch of Espionage. I can't help it. I love genre mash-ups...one of the main things that drew me to BrikWars, in fact. 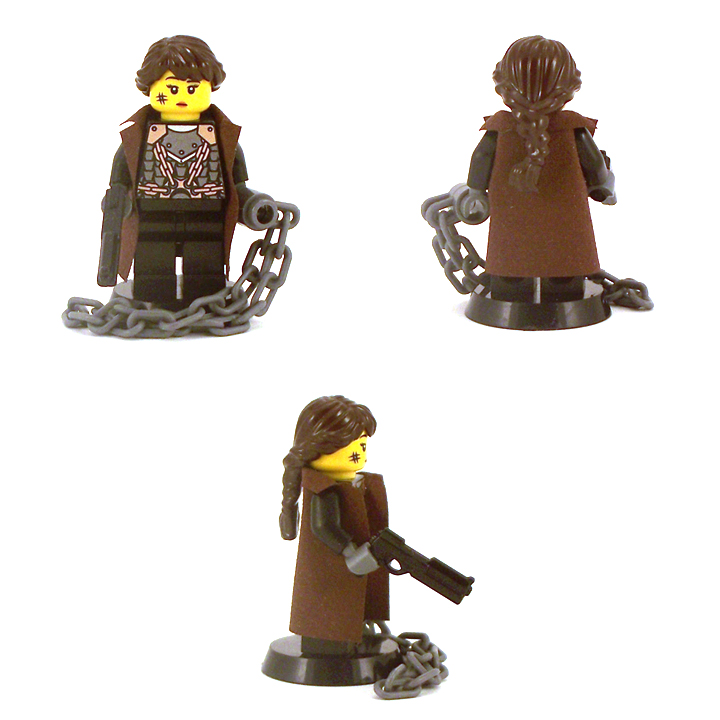 The Shepherd is armed simply, with a magnum and length of chain. Eventually, she'll be mounted on a massive bike. She guides the misfit group of survivors through the wasteland created by the alien invaders.

The Street Shaman, like all members of the Royal Expeditionary and Investigation Node, is outfitted and trained with Psitek equipment. Until the Invaders destroyed much of the Grey Empire, the Node was a very traditional group. They maintained and guarded the old ways and histories, their blood and brain running bright with rich legacy. As the majority of Grey survivors (having been abroad when the initial attacks came), the REIN that remained in the area have adopted a more militant (rather than hunter stalker) stance and have altered much of their Psitech equipment into weaponry. Shaman has refused this trend and hearkens back to more traditional equipment. The Psistaff is a minor concession, although it retains more utility than weapon-like function. Both the Staff and Psyberdisks serve as psionic power storage. The disks themselves serve a myriad of utility purposes. Shaman suffers from a very odd and very specific form of retrograde amnesia following an unspecified injury whilst travelling alone. He remembers very little of his personal past before Shepherd found him in the desert but he remains an expert in the Node's teachings. Readers of Battle for BR 2,015 will know the true reason for this. 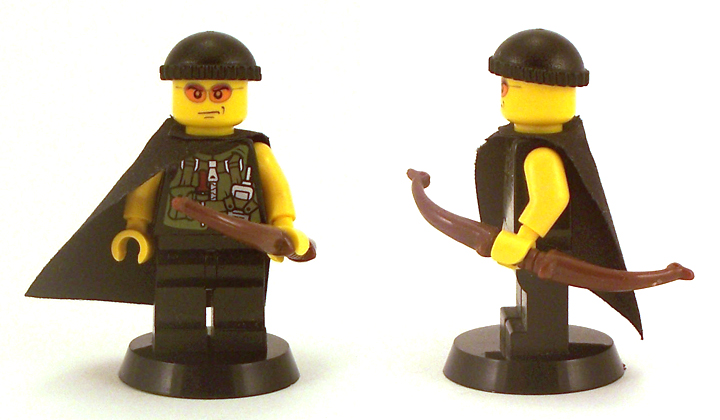 The Bow Sniper maintains a barrage of small utility and communication devices and is something of a tek wizard on a world where much advanced teknology is as useful as a paperweight. He can make almost anything work in some capacity. He is a masterful shot with a bow and is one of the few Minifigs with psionic talent. He uses Psitech Glasses to integrate his devices into a personal area network and to generate a heads up display (useful for guiding his psionically empowered shots). Sniper is one of the few beings to have ever successfully infiltrated an Invader vessel. 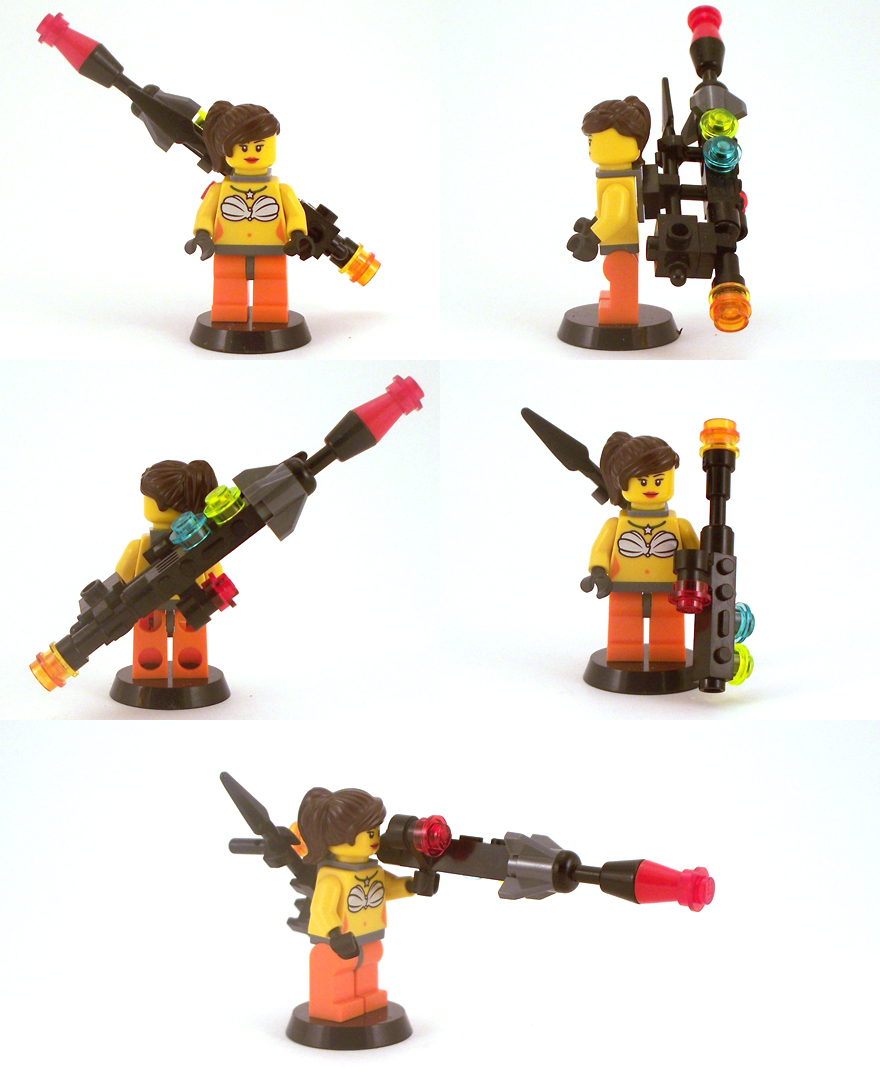 Ataxia is a half-crazed punk girl the Rangers found half dead alongside the road a few years back. They nursed her back to health and she has stuck loyally by them ever since. She is a wild talent, that is, an uncontrolled and extremely powerful psion. She manages the massive power flux by using a specially constructed Psitek Missile Launcher, the missiles to which are entirely formed from her own explosive psi energy. She is attempting, intermittently, to learn control from the other PsiOps members but, generally, she doesn't give a fuck. 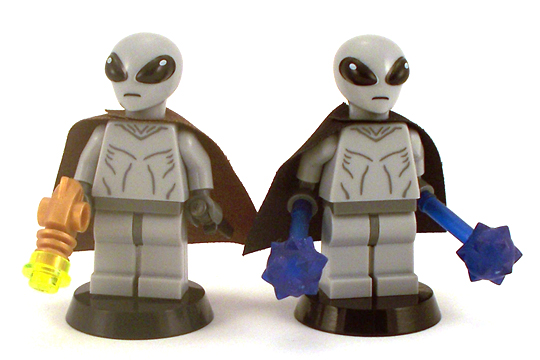 The Twins were the other two members of the Grey REIN that was assigned to this planet before the Invasions. Only the brown cloaked one is using Psitek, a Raygun to be exact. The other is displaying raw Psionic Manifestation, a rare talent. Regardless of whether an individual is using a Psitek device to harness and store energy or not, the actual psionic power is derived solely from the user's mind. As such, the color of each Psion's power is specific to the Psion. Psitek makes harnessing and using that power easier and causes less overall strain on the user's mind but dilutes the effects somewhat. 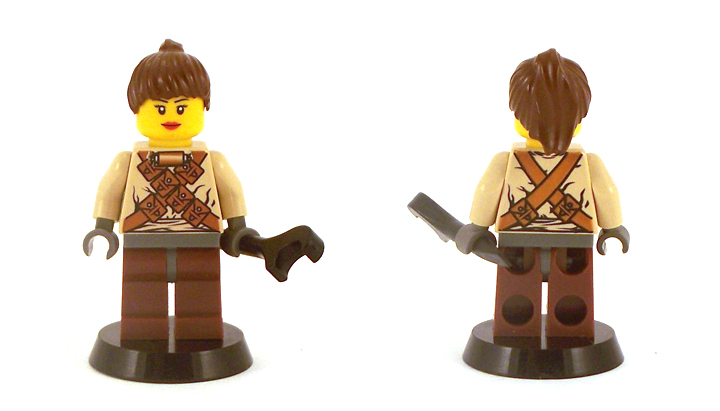 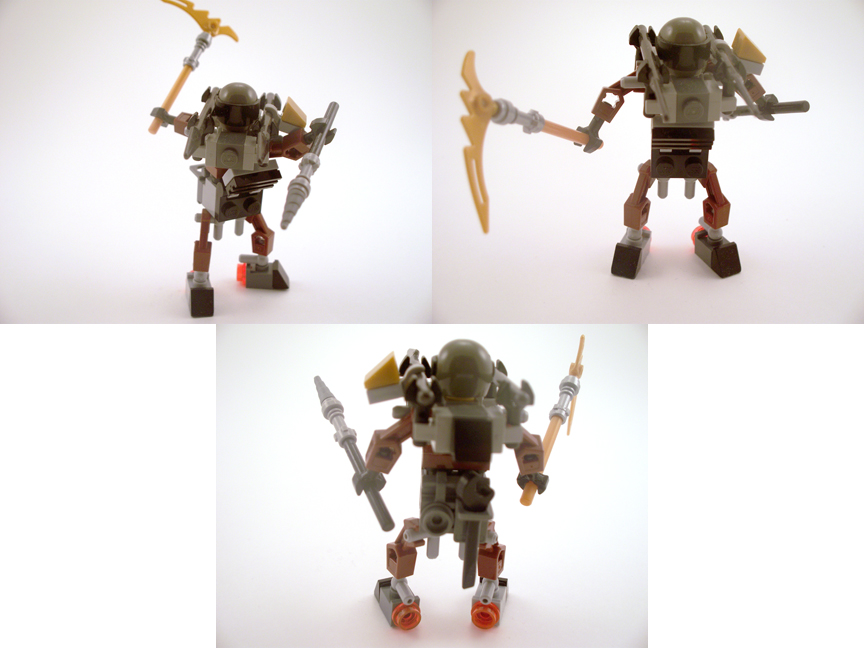 The Mechanic is the daughter of the Rocketeer and was, in fact, the genius responsible for her father's rocket pack. She is also responsible for the Rangers' Engineer Hardsuit (and is usually the one riding around in it), the maintenance of the Rangers' motor pool, and any other mechanical projects she happens to set her sights on. Her energy is frenetic and it's largely due to her prowess with a wrench that the Rangers' standard of living is so high. 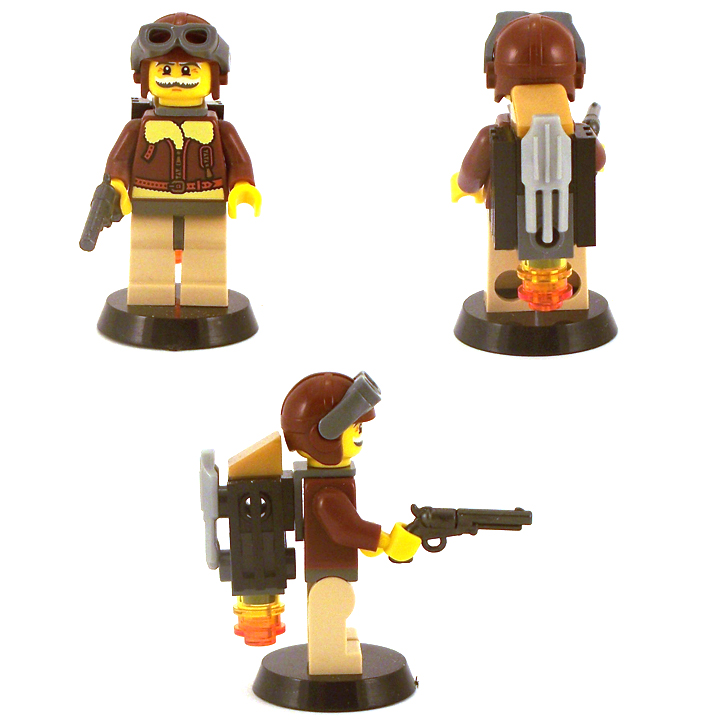 Armed with a Navy Colt Revolver and equipped with a jetpack, the aging aviator is a natural and charismatic leader. He is the father of the Mechanic but where he shares her driving energy, he does not share her patience. The Rocketeer has the soul of adventure. He does not dither or dilly-dally and takes to the sky with the rocket pack his daughter built him at the first available opportunity. He serves as primary scout and troops master, like a specialized sergeant, for the Rangers. 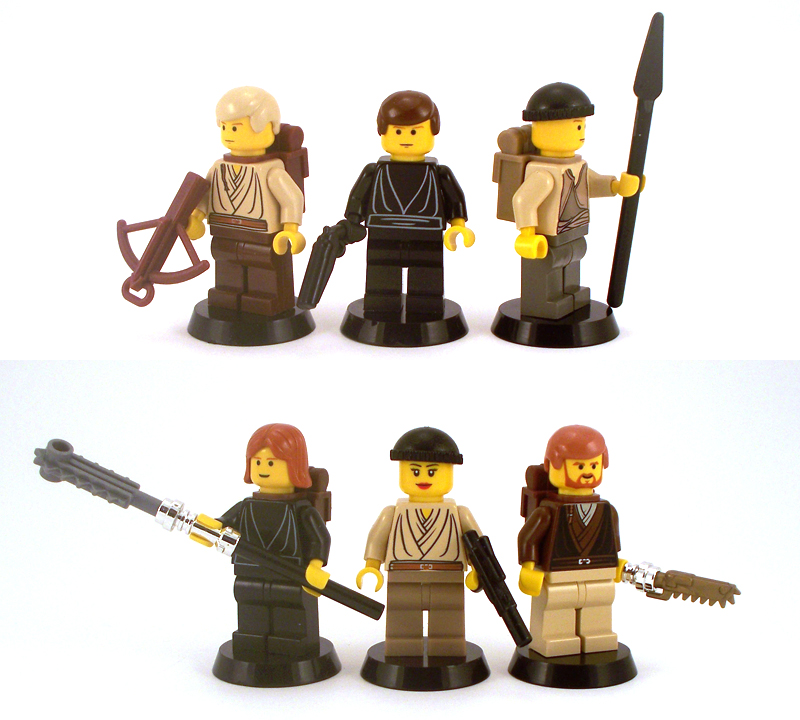 The Rangers are a ragtag group of survivors running the gamut of age, gender, and personality type. They are united by three things: their need to survive, their loyalty to the Shepherd, and their growing badassery. Equipment (Top, left to right, to bottom): Crossbow and Pack, Double Barreled Shotgun, Iron Spear and Pack, Chainpike and Pack, Blaster Pistol, Chainsword and Pack. 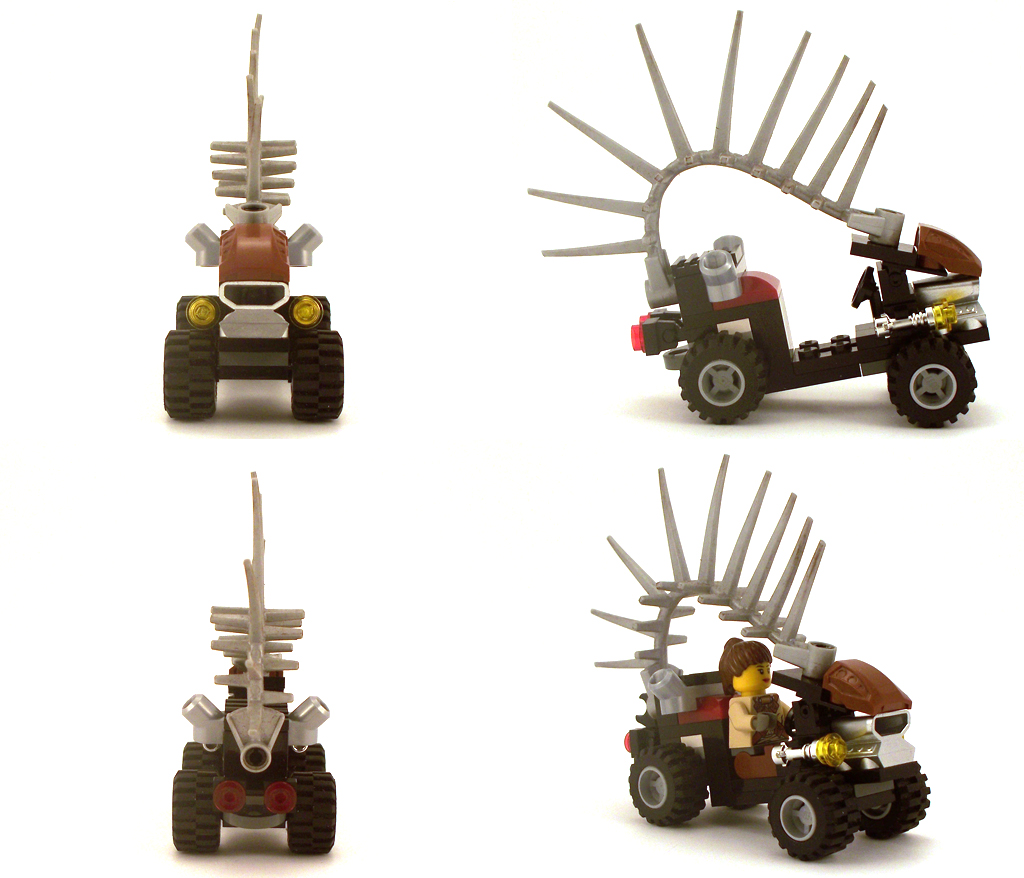 The Mechanic's personal buggy is built for speed and power and is larger than the other buggies. Big Mama is shielded from the front, making normal vision impossible. To compensate, the Mechanic has installed a video feed on the console, linked to the 6 cameras fore and one aft. 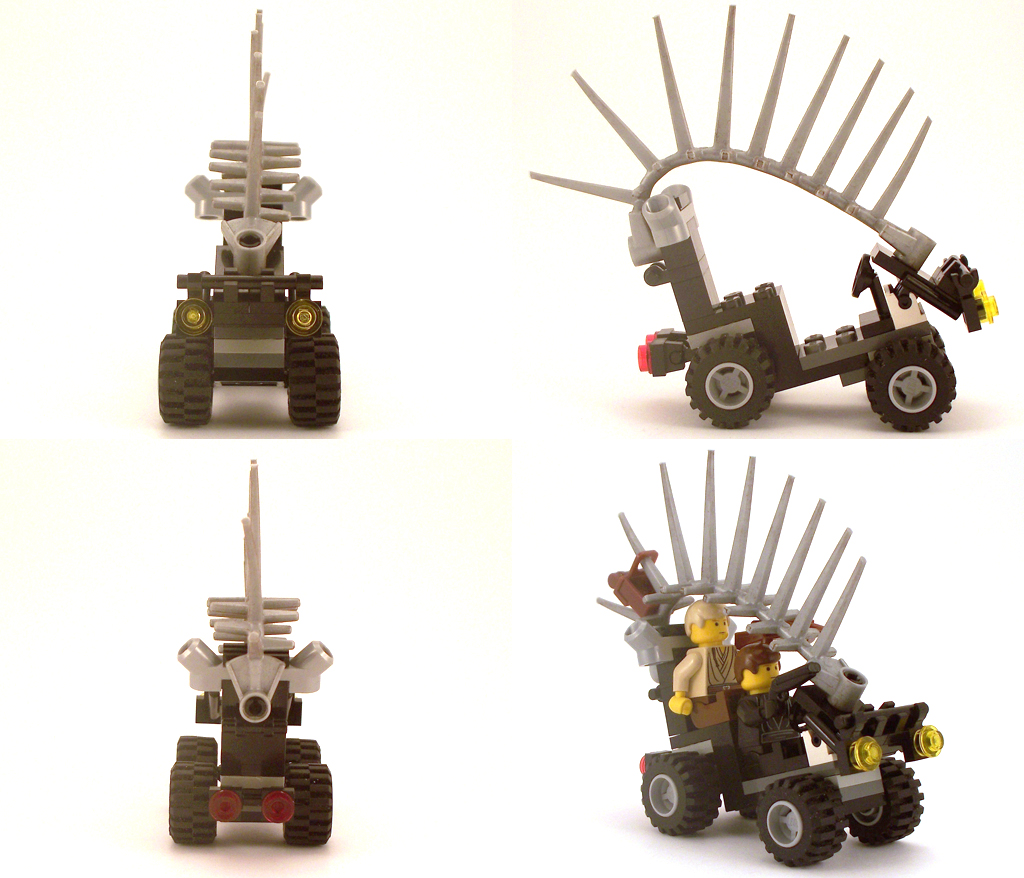 The Two Seater is a utility buggy built for cargo and transport across a variety of terrain. 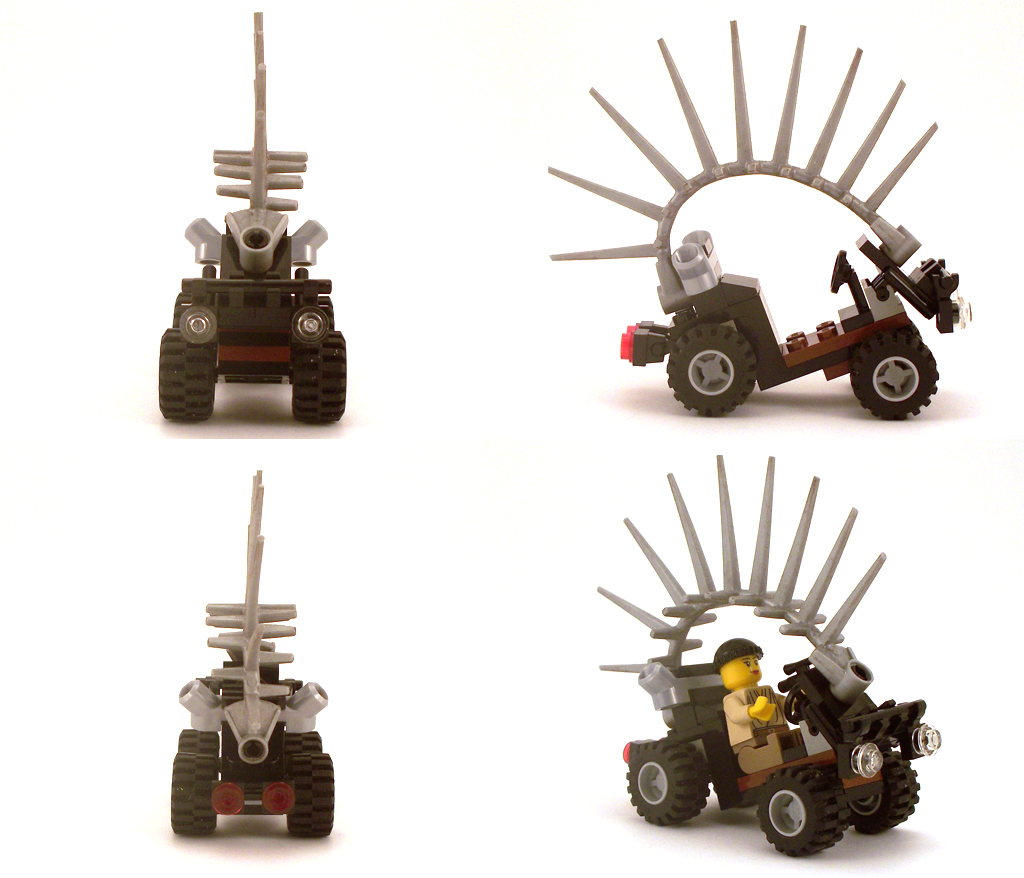 The Speedster is designed for flat out road speed with tight control and maneuverability. 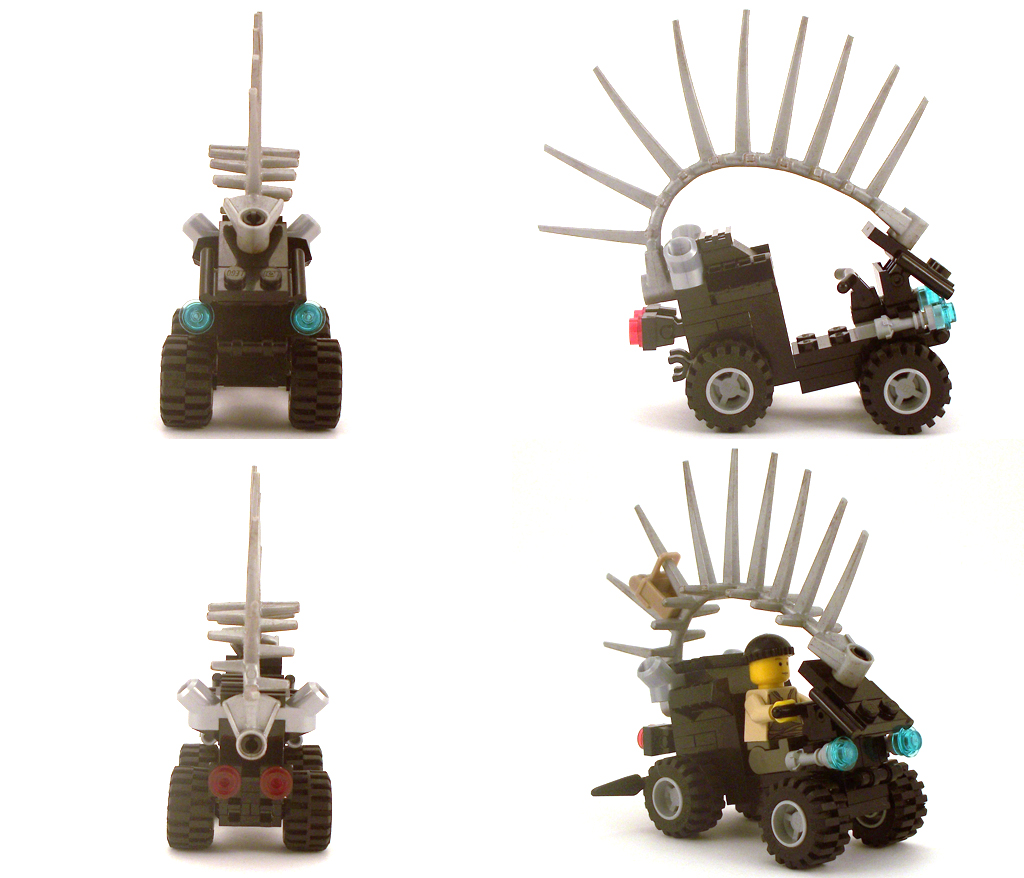 The Power Buggy is an all terrain vehicle, capable of handling topographical extremes. It functions primarily as a scout vehicle, ranging away from the main convoy as the Rangers move down major highways and through wilderness. 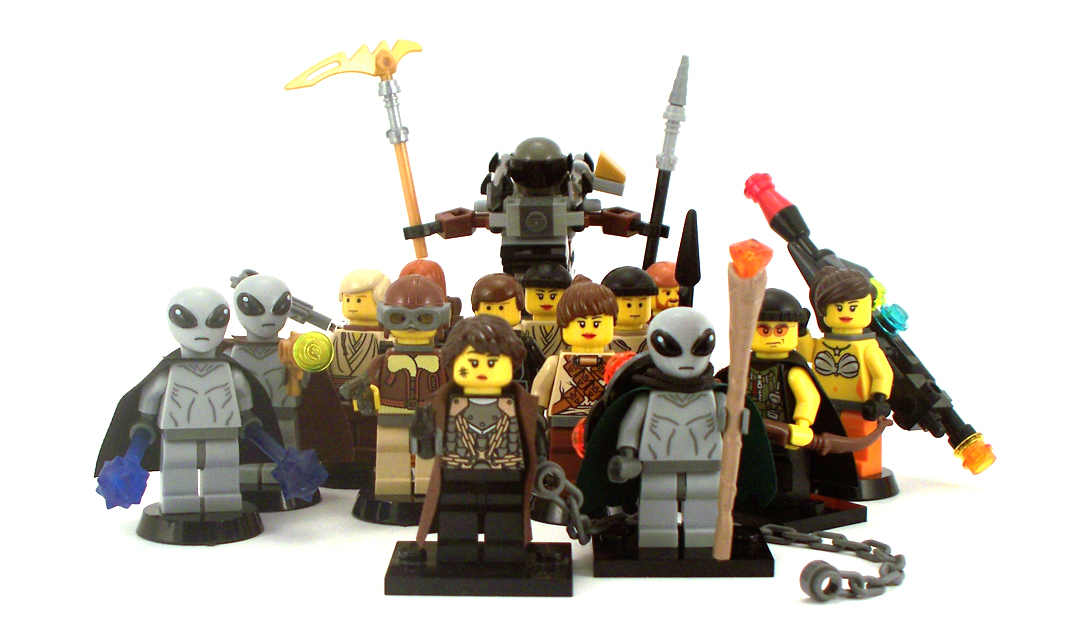 Hope you enjoy. I'm thinking that I'll be mounting most of the rangers on bikes. Eventually, I'll build a stupid large bike for The Shepherd...like Kai's or the one from the Agents set. I'm also considering a large semi, all apoc-ed out, with lots of guns, a mechanical bay in the back, and two landing pads on top. I'd like to build two small battle choppers, I think.
Last edited by Quantumsurfer on Wed Jul 05, 2017 8:18 am, edited 1 time in total.
Quantumsurfer's Narrative Index
Top

Those are freaking awesome! Your post-apoc. survivors are probably my favorite I've seen here.

*Edit- I accidentally a word.

I like the amount of personality and back story these guys have. They all look like such badasses too.

Awesome. Everything of yours is completely awesome.

Those spikes are a very NPU, and each individual fig is a masterpiece upon itself. This is literally the best thing to ever happen to anything.
This sig is too fucking large: show anyway

This us right up my street. The figs look fantastic, the backstory's pretty nice, and the buggies - ME LOVES THE BUGGIES

I appreciate all of the positive feedback.

Wow, what a bunch of neat minifigs! I especiallyl like the buggy and the psionic-guys.
NO!THERE ARE NO POLAR BEARS IN FINLAND!!!

I really like them, and all the background stuff is really cool too. Nice job on them.

Thanks, everyone. I don't know how long it will be before I can follow through on my plans for them but I'm glad you've all enjoyed them in the meantime.
Quantumsurfer's Narrative Index
Top

Alex wrote:I like the amount of personality and back story these guys have. They all look like such badasses too.

This, plus, great pics. Well done!