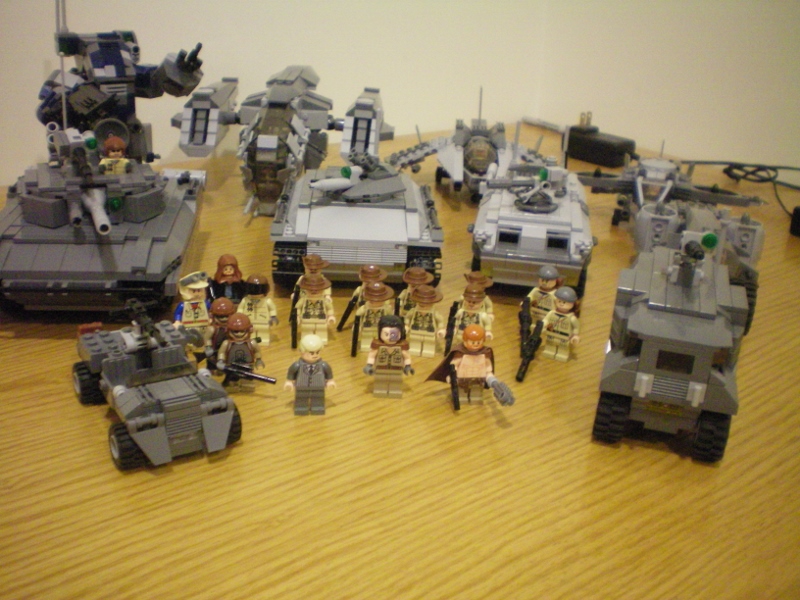 I spent around 4 hours total working on this. It went through several design iterations, including one where it had the same urban camouflage pattern as the Iron Maiden. All in all, I'm very satisfied with it--The only parts I don't like is how the hatch on top doesn't open and that there's no engine block.
Mi-14 "Hip"
A light scouting/support helicoptor

This one only took one hour to build. It originally started as an immortal gunship, but took on a vastly different form and color: The only things it retains are the "wings" and the vaguely insectoid cannon. I am completely satisfied with it.
Warthog Dropship

This here is some pretty sweet shit, despite the peaceness of it all - pre-continue, RoC would be proud.
-- WARNINK -- LINK BELOW IZ KNOWN TO CAUZE HEMMORAGE --

I like how you managed to fit figs inside the main battle tank, whilst still having a nice-looking result (something I find almost impossible as regards armoured vehicles).

Well shit. This has to be the biggest and baddest cameo army I've seen yet.
Westeron Restored (Fantasy BrikWars)
My Twitch - My blog
Top

Wish I could make my tanks look that awesome.
My Armies: Knights of Aldasveign, Arcadian Federation, Calvarian Empire
My art thread
Top

Your army is reeeally cool.

Do you have a newer group shot of the entire army. I would like to put the 45h Union Army to the Army Gallery topic.
My Youtube Channel About LEGO and Toys
Top

Do you have a newer group shot of the entire army. I would like to put the 45h Union Army to the Army Gallery topic.

So much cool stuff here. The heroes, tanks, and urban camo Iron Maiden are the highlights, though.
[21:30:33] Scritch: you can put it in theblackdog

Man, that looks a LOT like ROC's stuff. Nice work!

Holy shit Warhead you're back! Did you beat that infection?

Yup, after two weeks of sheer hell and constant sickness I have emerged a wizened wreck free to hobble about on crutches like a twisted mother fucking Tiny Tim with turrets. Get Fucked! Every One!

I love that VTOL Troop transport. I may have to steal that load set-up.
Dickbutt
Top
Post Reply
19 posts