A army: The Sengoku's UPDATED

A army: The Sengoku's UPDATED

Hello, after over a year of lurking on this site, I decided to show off my army.
This army has been in a work in progress for about 4-5 months now so I have been trying to perfect this for a while.
No back story yet, but one will come out soon.
NOTE: Sorry for some of the horrible pictures. My camera is shitty.
Also, i do realize that Red and Gray faction colors have been done before. Please excuse this, for they are my most abundant colors. 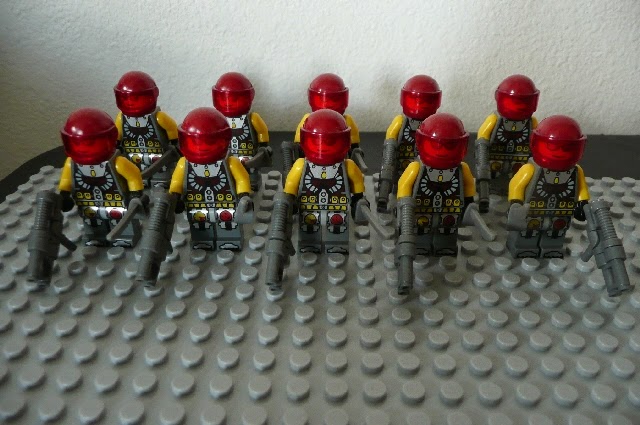 This is my most basic soldier. Armed with a plasma rifle and a scimitar, they can wreck havoc on the battlefield with a few lucky rolls.
My army currently has 20 of these guys.
Some extra pics.

These two are my officers, set with the task of leading the grunts in a orderly fashion. they are armed with a katana and an assault rifle.

Picture of their backs

These pilots are a very vital part of my army because most of my power is based on my vehicles. They are equipped with very strong armor just for this reason. 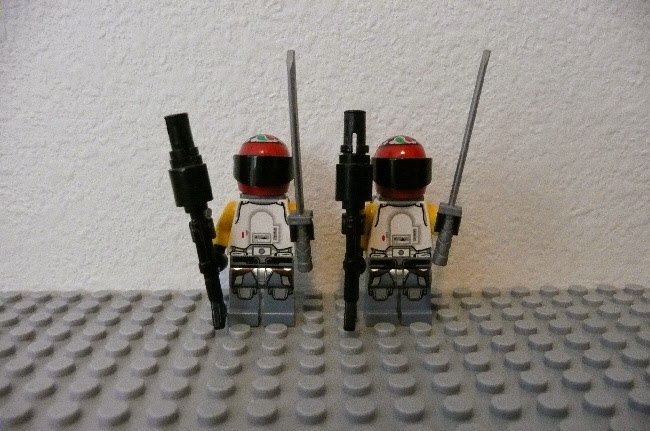 These are my jetpack/airborne troopers, but are not a very important or useful part of the army. They are secertly known as a place to put failed officers.
(not pictured are the jetpacks sorry

The aliens captured by the Sengoku's are usually turned into these berserkers that often have singlehandedly destroyed entire squads.
They are worst nightmare for most troops in close quarters becuase of their OTC's. 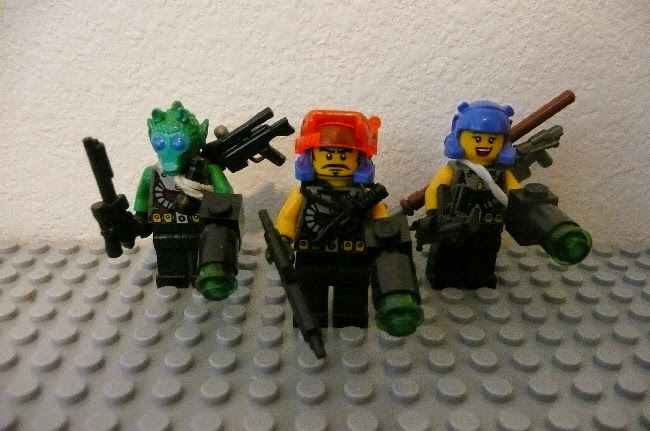 These six troopers are some of the most skilled soldiers within the army. They possess mastery in all weapons, thus allowing them to carry multiple types of weapons at one time. They are the only deployed for the most important missions and are a main reason why the army has won quite a few battles.
More pictures:

Now, the next group are all very powerful warlords that govern the cities that the Sengoku's own at the moment. All of them use quite a bit of their cities fotunes for their weapons, leading them to be stupidly large. 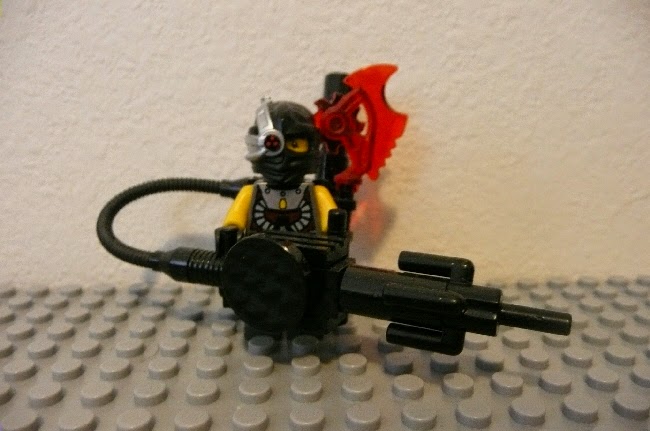 Due to owning a mining city, (insert name here) has been able to use some the smaller mining drills to create a huge proton cannon. The cannon is able to disintigrate any thing in it's path and has often proven to be too destructive.

Karoshi is the only alien ever to have gotten this much authority, and takes full advantage of it. He created a movable tank cannon as his weapon of choice and then used a rockets thrusters as a jet pack. He can often be seem terrorizing his city by blowing up skyscrapers and killing millions.

(Again, sorry for the horrible pictures). Jōshiki, shown here, instead of creating a massive weapon, has turned himself into a cyborg. He has now many times the strength and speed of a normal man and has a built in communications system with all his men. Of course, he couldn't resist to build a decently sized gun, which is decently powerful, but his main strength comes from his body modifications.

Rashomon, shown here, is one of the people that no one really knows much about. He never talks, only kills. However, even with all this mystery, one thing is obvious; he loves burning things with his massive flame thrower. Another thing commonly known about him is that he's great friends with the emperor. A rumor is that he lead the first armies into war before the current emperor took over. 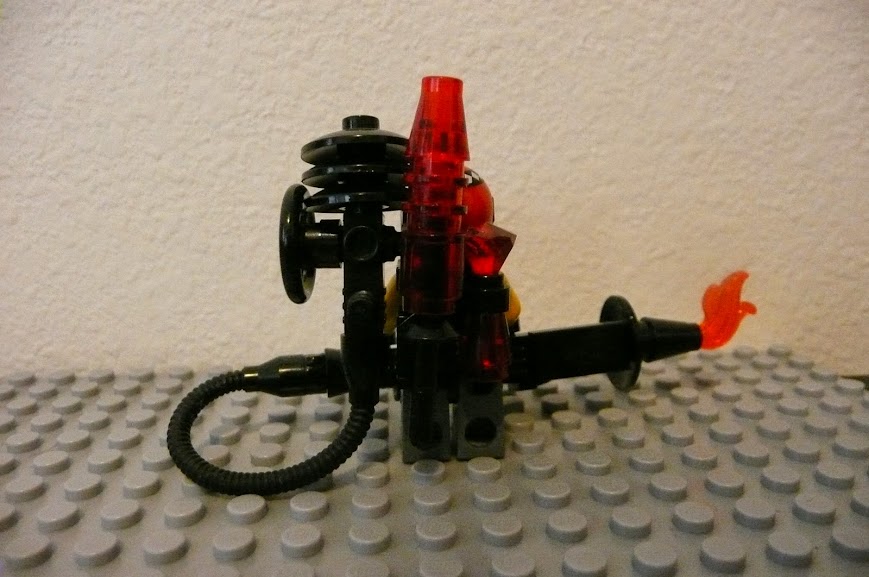 Next, the royal family. The family is composed of a son, a daughter and the father/the emperor.

Being the youngest, Taiga is the most optimistic and unintelligent of the family. During battle, he always leads the charge with his custom katana's and dual pistols. His love for killing is often great when wanting to boost moral and spark a comeback in a dire situation.

Most likely the most mature of the three, Akuma has a strange fascination with testing humans with her chemicals. Her study has helped on the battle field, where she can create death machines out of a few corpses, turning the tide of battle quickly. Also, her OTC helps.

Ryujin is the emperor himself. His right side was completely destroyed by an explosion near the beginning of the empire and had to create cyborg parts to survive. The weapon he carries, fires pure RT at the other side, usually melting them instantly into one giant pool of blood. 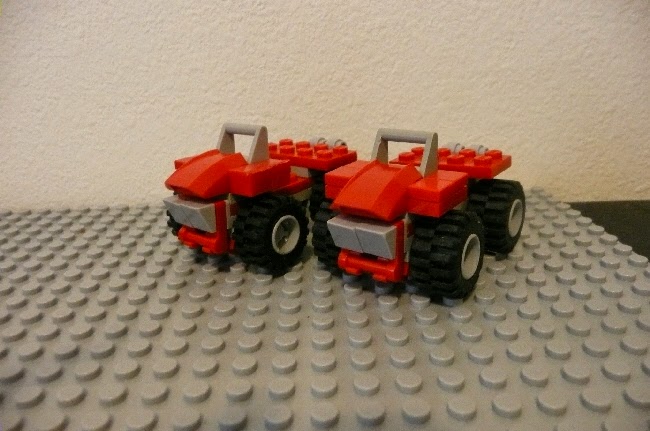 A pair of boring quads.

The personal bike for Taiga, extremely fast and deadly. Taiga uses the built in cannons to get rid of the grunts.

This is the chicken walker of the army, Extremely versatile and useful. It has the perfect combination of speed and firepower that decimates the opponents. It has two grenade launchers and two mini guns.

These two machines are the Unicycles. These one wheeled death machines have interchangeable "arms" that are made for different situations (this is the plan anyway, I need to make some more) which allows for an element of surprise on the battlefield. Also, I really like the claw. Some of the weapons include; grenade launchers, a claw, a flame thrower and lasers.

This is the main tank for the Sengoku's is very tough and can deal out quite a lot of damage. It has a main cannon, a flame thrower and a smaller cannon.

Not sure what it is, just looks kinda cool. 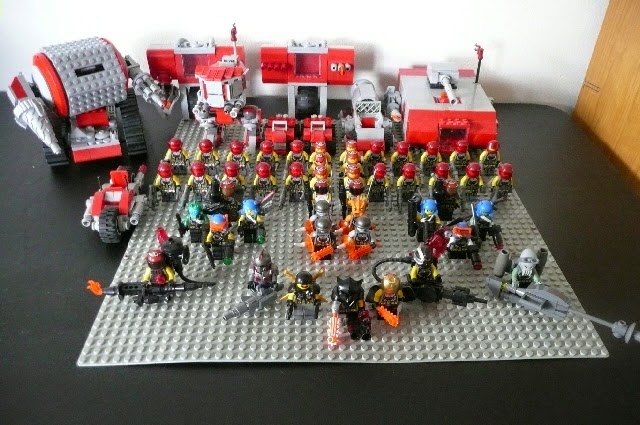 Awww man, there's a whole lot of Brikwars in this army. I love it! Mainly the Unicycles and the WIP engine of mayhem!

I love the red and yellow color scheme, and the elite troopers show some amazing customization. The "Whatever it is" looks insanely badass, like a Dreadnut on tank treads.
[21:30:33] Scritch: you can put it in theblackdog

A very nice army, I just realized how people build different tanks, I will go and do so myself!
Phalek empire, S.P.A., Belgïe, My claim to not being a shitbuilder.

Now that's a cool army! I like the job you did with all the vehicles. My favorite is the one, you're not sure what it is, but the rest is also pretty good.

very cool man, the uni bike things look like the things from fall out new vegas
"Psychiatrists are just not smart enough to be psychics."
Top

Dude, everything about this army is awesome. I don't have any suggestions here, your vehicle designs are superb and I love the color scheme you got going on overall. And Taiga's face is very fitting.

Mnds are like parachutes. Just because you've lost yours doesn't mean you can borrow mine.
Top

This is good stuff. Unique and awesome.
"Hey, you try making love to a complete stranger in a hostile, mutant environment, see how you like it."
Top

Thanks for all the feed back guys!
Currently I am scrapping the Chicken Walker to make a mech. Pics will be up soon.
Also, what do you think i should do with the WIP engine of mayham?

hobonoob5000 wrote:Also, what do you think i should do with the WIP engine of mayham?

I love the Unicycles by the way.

Dude, can't wait to go against this. I love the vehicles!

Re: A army: The Sengoku's UPDATED: Mech

After a few weeks of building/perfecting this mech, I think it's finally done.
It has a flame thrower, and a sword that slices enemies into tiny little pieces.

This shows the construction of the arm. This probably took the longest of the entire build.

Greebling on the back.

Hope you enjoyed my new build. If there is anything I could add, please comment.

Re: A army: The Sengoku's UPDATED: Mech

Greebling on the back.