The Military of Trattoria

The Military of Trattoria

Note 1/18/2017: If you've come here, go to the new Meritocratic Republic of Trattoria thread here, as that has all the new updated stuff. This thread is now outdated.

(Nyphilis doesn't exist anymore, all former Nyphilis vehicles and troops are now under a "Trattorian Empire")

Trattoria was slowing down. The colonization efforts edged out at about 150 systems, the economy stopped the robust growth it experienced since Trattoria’s introduction to the brik-verse, and the inter-galactic voyages were being spaced farther and farther apart due to funding issues. A new president was elected, but she has chosen to remain elusive and let one of her spokespeople, Admiral Angela, handle publicity. Trattoria looked like it would stagnate, and the people despaired.

A top secret project for months, Trattoria’s best were recruited to design the ultimate in tank technology: the super tank. Despite resource problems throughout the program, enough of the last scraps of white ABS were put into creating an army of super tanks, in an attempt to catch up with bigger star empires such as Assyria and the 45th Union.

The turret has two compartments for gunners, each armed with a machine gun. Also mounted are two 4-inch Tranquilizer cannons. Communication arrays are attached in the back with significant range.

The main gun of the Trattorian super-tank is the 9-inch orbital bombardment Peacekeeper launcher. If the Trattorian’s main battle tank could blast a starship out of the sky, this could knock a space station out of orbit.

We combined two different sponson designs on the armor skirt, one with missiles and the other with a small turret.

Massive doors open to the as-yet empty cargo bay. So far I have yet to finish the interior, will post pics when ready.

Main battle tank and the super-tank’s commander provided for scale.

Trattoria has risen far from its humble roots, now having innumerable fórces and almost every main class of military vehicle imaginable. Fear Trattoria, for our might is great!
Last edited by beluga on Thu Jan 19, 2017 12:40 am, edited 2 times in total.
▲
▲ ▲
Hail the Triangle!
Top

So your new faction is named after a type of Italian Restaurants?

Ok. but beyond that, the tank is large and the turret hatches are cool. But I would try and make it less

The pics are okay but Content Removed
Fantasy battles
Top

It's bretty good stuff but the tank has to many studs I'd try to use some smooth plates on it
Only 2 things are infinite the universe and human stupidity, and I'm not so sure about the former- Albert Einstien.
Top

Nidhoggur, I am guilty. The best SHIP design that used minimum pieces.

Warhead wrote:I see an attempt at Natalyas super tank with a bit if Captain Zips in there also, I see an attempt at Tunasailors light Destroyer the Nidhoggur http://www.brikwars.com/forums/viewtopic.php?t=3029/url ...I see an ideas sucking creature taking credit that isn't due him.

Okay but Warhead, seriously everyone here copies someone else from time to time. My original Brawler hardsuits were copied off someone here, and my armoured car is obviously a copy of the one made by tunasailor...
▲
▲ ▲

That ship is just the Nidhoggur but less good. Content Removed

Yeah, that's not an issue Natalya. The fact of the matter is that these constructions are good, I can live with bloxxy Lego. But as always he went about it wrong. I copy peoples stuff too, in fact I copy everyone's stuff. But, I always mention the fact or make a big deal of who's it originally was because it's the only right and honourable thing to do. If I've pass anything I copy off as my own I sure don't recall doing it deliberately if at all. But I do recall someone that likes to bastardise everyone's ideas, mostly mine.

PedoBeluga, of course I have a grudge against you, you've been riding on my back for almost a year. Don't try to dismiss what I have to say or invalidate my opinions with your twisted whining. Besides you've earned this grudge, working so hard to attract my attention it's a bit late now to say you don't want it doncha' think?

I'm not inclined to come down too heavily on the big tank, since pretty much every mega-sized tank on the forum is an imitation of Natalya's in some way.
Seriously: 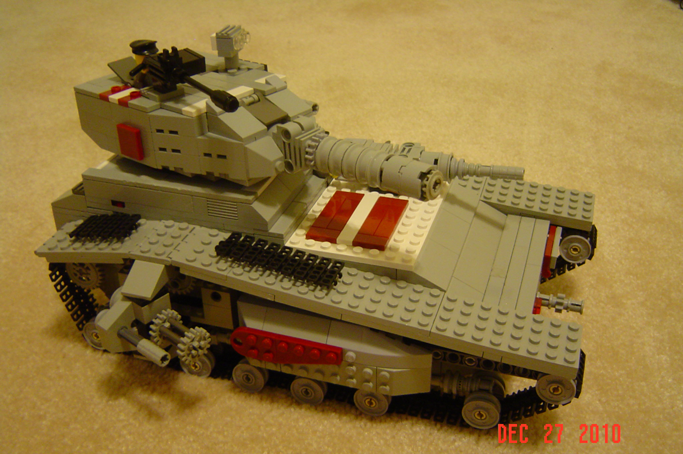 There's not much variety there in the first place.

The ship, though... it's a really transparent imitation and not a good one either. Back to the drawing board with you.

Still it's a pretty impressive roster you've got. Content Removed
[21:30:33] Scritch: you can put it in theblackdog

I don’t feel that I copied anybody intentionally, and that this is my own idea/creation. Regardless, I give Roc some credit for providing me with a few ideas used here, such as the overall chassis shape and, to some extent, the sponson designs.

That SHIP, I have never claimed to design or own it. I had at the time, perhaps enough white bricks to fill a sandwich bag and a pile of 1x2x5 columns. I could not design any decent looking SHIP that didn’t look horrendous with those pieces, so I copied tunasailor. Regardless, whether it’s original or not, though it might not give me credit MOC-wise, it certainly is useful in a Brikwar, which is really all that matters.

Edit: @Hobo, I always come up with stupid names for my factions. In its last iteration, the name was (unintentionally) Necrophilism+Syphilis(Nyphilis). Trattoria sounded cool when I first looked at it, had no idea it meant an informal Italian restaurant.
▲
▲ ▲
Hail the Triangle!
Top

beluga wrote: Edit: @Hobo, I always come up with stupid names for my factions. [snip]... Trattoria sounded cool when I first looked at it, had no idea it meant an informal Italian restaurant.

Nothing wrong with funny or silly names. My space faction is named after a very little known band I like. Vinx.

So good luck with the Trattorians.

I wish I could go to the DC/Virginia brikwar. I think I would pwn everything except the HATREDCOPTER. <-- Note: This is not a troll comment. Don't let yourselves get baited by something that isn't even troll material.
▲
▲ ▲
Hail the Triangle!
Top

beluga wrote:I wish I could go to the DC/Virginia brikwar. I think I would pwn everything except the HATREDCOPTER.