Space police lie slaughtered in what was a suburb just a few days before. Not a single one of them fired off a shot.(I don't have the bricks to do blood effects, so I just edit later)

Who is capable of decimating so many without sustaining a single casualty? None other than M.A.S.S-the Misanthropic Army of Super Soldiers! They have been biologically perfected for both strength and reflex, and know no equal on the battlefield.

The Poseidon tank is protected by more than 1.5 feet of ceramic alloy plating, capable of stopping anti-tank rockets in their tracks. Armed with a 400mm U235 Fission cannon, 4 30mm anti-aircraft cannons, and 16 energy rockets, it is more than capable of decimating both land and air targets.

The APAT Gunship is as well armored as some tanks, and has 4 guided rockets, 2 30mm flak cannons, and 2 miniguns. It is capable of Vertical takeoff.

The Harbinger mech is quick on its feet and is armed with a heavy vulcan cannon and an anti-armor energy beam.

Welcome to the forums! You have a really good looking army, the Blacktron-ish aesthetic is badass, but could you try to take some better photos? You're using too much flash, and the camera is so close to the units that I can't really get a sense of what the vehicles looked like, or see any infantry other than what's in the front row.
[21:30:33] Scritch: you can put it in theblackdog 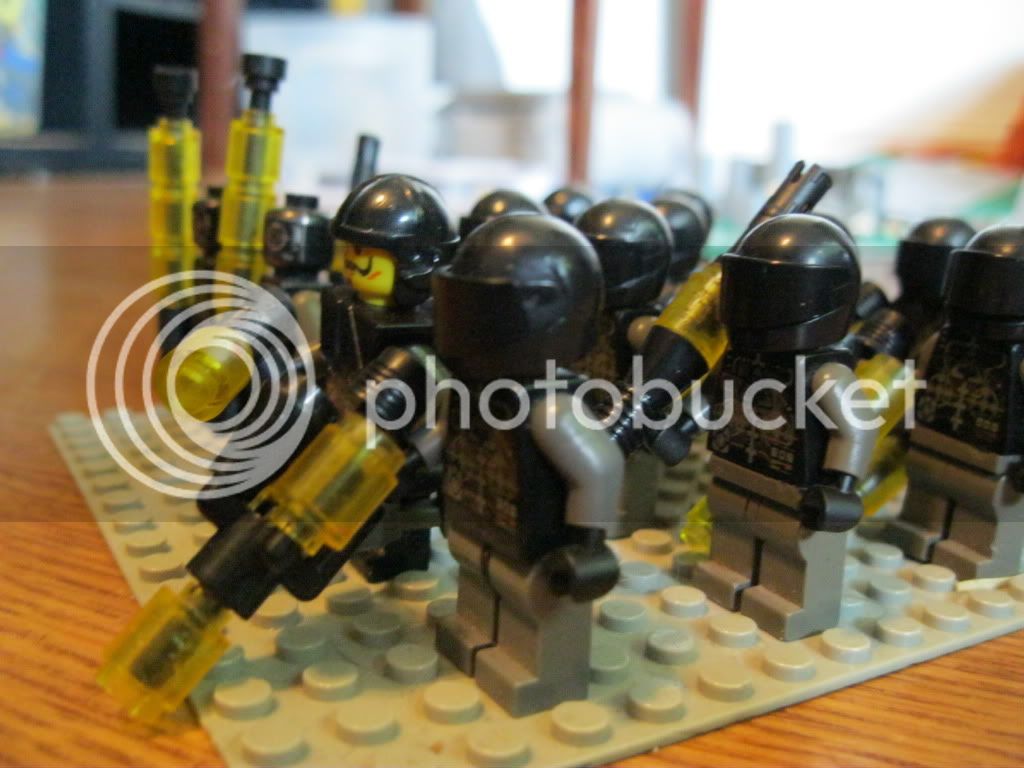 yes, much. your army looks pretty nice so far, I like the troops, they give off a very evil feeling. I might suggest trying to integrate your cannon on your tank into the chassis a little bit more, but other than that, your vehicles are nice as well. you might want to take out the duster, though

I love your weapon designs, especially the gun being held by the guy in the front left corner -- I may have to make one of those for my troops. The tank looks really cool as well.
[21:30:33] Scritch: you can put it in theblackdog

Ooo... I like the use of the Yellow Transparent briks on the guns.

Uuuuh, BlackTron-ish, I like it very much. Nice use of YTO.

Is it a coincidence that these cybernetically perfected soldiers are lead by a Von Brag?

More pics of the vehicles pls, they look great

Last few:
There are hidden flares on the APAT Gunship.

To give you idea just how thick the tank's armor is, this is the hatch.

Now we have to be scared of YT as well

Those troops look decidedly scary and definitely not the type of chaps you'd want to have living next door.

That gunship is pretty awesome.
An army marches on its stomach, and its favorite food is fudge.
Top

I've always been fond of that Insectoids robot and I applaud you for using him.
Top
Post Reply
27 posts