After gaining a massive victory over their enemies, the Menggu, the planet Avalon underwent many changes regarding their stance towards the rest of the galaxy.

The mysterious stranger that appeared during the final battle, Warhead, immediately assumed the role of instructing the highest ranking generals in the Avalonian army and navy. His tactics seemed brutal at first, but with time, it was accepted that the best defense from the hostile galaxy would be a strong offense.

Semaj Nagirrac became the Imperial Ambassador of the Kingdom of Avalon. His first assignment was to issue a warning, under Warhead's direction, to the Menggu regarding an imminent invasion by Avalonian forces. However, Semaj discovered that the Menggu wanted peace just as much as the Avalonians did and the two systems made peace.
Bankrupt from war and desperate to avoid further conflict, the ruler of the Menggu declared their home planet, along with their other star systems, under the direct rule of the new Avalonian king (when the new king would be chosen).

With the news of the Menggu becoming a part of the Kingdom of Avalon, citizens from all over the planet volunteered for the army and navy. Conscription no longer became necessary.

With the new tributes arriving from the Menggu, the Avalonian navy began to be rebuilt. Goddeu landing craft were produced in staggering numbers. Their defensive capabilities included two forward cannons, a dual cannon turret on top of the vessel and two area guns on the wings.

The area guns were used to sweep the ground before line infantry would exit the vehicle through the hatches.

Since nearly all of the fighters in the royal navy had been destroyed during the Menggu invasion, a new fighter was designed and produced. The Culhwch star fighter featured a highly maneuverable design with four forward facing cannons.

The underside of the Culhwch carried a Torrentic missile, capable of medium to heavy damage. Each Culhwch carried only one such missile for the purpose of tactical bombing.

Due to the rapid increase of the army and navy, eight new star systems had been colonized by Avalonians. Initial scouting and recon was carried out by scouts on hover sleds and remote turrets dropped on the surface of each planet.

A new threat to the shipping between the various ABS mining facilities in the colonies was the appearance of the deadly space sharks. Fast and vicious, these animals showed no sign of fear when attacking the imperial trade fleets.

The Kingdom of Avalon is officially open to new alliances, both economic and militarily, across the Brikverse. To open negotiations, please send an ambassador to the planet Avalon with an explanation of why a mutual agreement between our system and yours would be beneficial.
Last edited by Semaj Nagirrac on Fri Aug 10, 2012 12:42 pm, edited 1 time in total.
Top

Good lord, is there no end to the amount of win you can produce?

I love the fighter and shuttlecraft, can't wait to see them in action.

It'll be interesting to see what happens when the "real" Warhead arrives on Avalon to reclaim this particular shard...
[21:30:33] Scritch: you can put it in theblackdog

It doesn't get any better than space sharks.

While many of the elements are well done, The Space Sharks are the best.

This very well done, great job.
I wonder what kind of foe they will have to face now.

Also: The Spacesharks are pure win. You should also make some space crocs.

The Silvarian Empire on behalf of King Roberts formally requests an alliance. Details will be worked out with ambassador John M. Acre.
This sig is too fucking large: show anyway

The Avalonians are quickly becoming one of my favorite armies in Brikwars. The space-sharks only make it better. ^_^

The Squid Dominion is willing to... negotiate with Avalon with planetary development loans and other business deals. Now at a low, low, 15% interest rate! ^_^

Ha! Space Sharks, we must hire them immediately... with a view to interbreeding, their progeny will make excellent soldiers.

I like the fighter craft and the recon sled. I think we shall see some cool action in the days ahead.

Warhead wrote:Ha! Space Sharks, we must hire them immediately... with a view to interbreeding, their progeny will make excellent soldiers.

Excellent... All according to plan...
READTHEFORUMCODE!!!

Silverdream wrote:The Silvarian Empire on behalf of King Roberts formally requests an alliance. Details will be worked out with ambassador John M. Acre.

Acceptable. Your people defended us in the past. We will prepare negotiations with John M. Acre when he arrives.


Swordsalmon wrote:The Squid Dominion is willing to... negotiate with Avalon with planetary development loans and other business deals. Now at a low, low, 15% interest rate! ^_^

I could have sworn my credit score allowed for only 6% interest... No matter. We look forward to ironing out the details with you. Might we recommend it over a business lunch aboard one of our cruisers? The space shark in particular is highly delectable.
Top

Jbgarrison wrote:It doesn't get any better than space sharks.

Warhead wrote:Ha! Space Sharks, we must hire them immediately... with a view to interbreeding, their progeny will make excellent soldiers.

Excellent... All according to plan...

Well. Looks like the Immortal's mortal army might be experiencing a bad case of the sharkhead mutinies. I wonder if this is why they haven't swept the galaxy yet?
READTHEFORUMCODE!!!

Sharks with frikin' laser beams, I love it! My space sharks might have to work out an alliance with them.
Top

Type-C Frigates are the lightest, least armed of the Avalonian Navy. Equipped with only four laser cannon turrets and four forward facing cannons, these ships are cheaper to produce than the higher classed A and B-Type frigates. 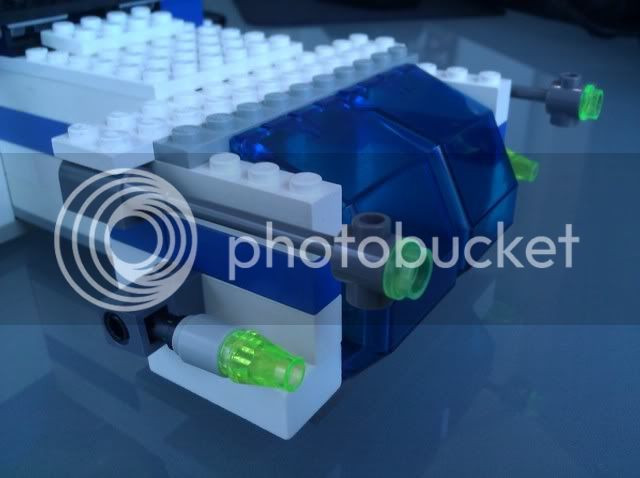 The Bridge is defended by four forward cannons. They fire a high energy laser bolt at targets locked by the defensive network.

The lower cannons are capable of swiveling up to blast the underside of an enemy ship or down to clear an area for landing.

The wings are equipped with a single turret. The turrets are made up of two high energy cannons and pack quite a punch.

Towards the aft end of the ship, light repeater cannons protect the engines.

Eleven engines total propel the ship forward. The same transmitting device found on the Culhwch is also installed on the Type-C Frigate.