I've relatively invisible for the past year aside from posting Brickfair stuff from 2013. Such is life I guess. The Dragon Guard have continued to increase in number, thanks in part to Lord Mercat offering some suggestions and simply wanting to add more bodies and punch to the army. The Dragon Guard was my very first faction, consisting of a mere 31 figures, a ballista, 4 horses, and my iconic griffin. I've had a goal for some time that I would like to hold a fig-count of at least 100. Well, I'm nearly there! For the sake of nostalgia, here is a walk through the years of the development of the Dragon Guard: The original army of 31 figs! By 2011 the army was up to 50 figs, essentially a bolstering of all the core units.

By 2012, the only major addition to the army was the Dragon Cannon.

I moved in 2013; and the Dragon Guard came with me. The number of cavalry more than doubled with the addition of dragon riders, and the army's other newest unit--fireblades--made a debut. Fig count hits around 68. 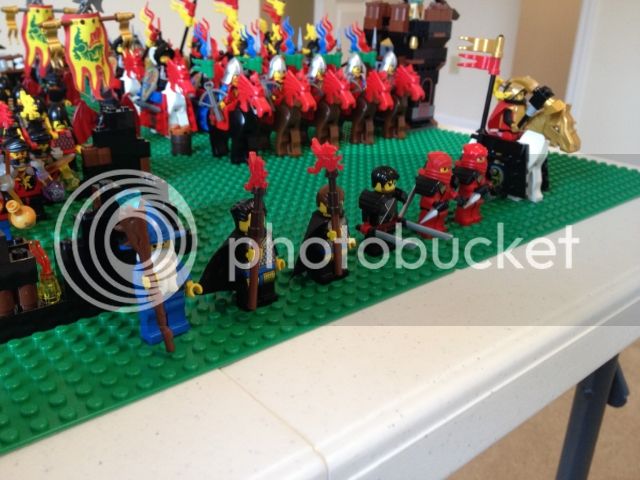 The forces are quite expanded since its original days. The total army shot is not great quality, but can hopefully glimpse the expansion that has occurred. A full headcount now is:

I LOVE brickforge customs, and in February, Brickforge had a 1/2 off sale. So...got me a bunch of stuff (read: lots more wizard swords). My Fire Blade unit seems to constantly go through iterations, and these are have the ossum OTC swords and brickforge's line of potion bottles.

Another truth that became apparent in battling last summer was that I didn't really have a resilient infantry specimen. Spearmen are--by the rules--very points effective, but staying power is good too. These are kitted out not unlike Brag's bulls. Halberds (2d6) and tower shield, also sporting the compensating Speciality (to use both at the same time).

The Dragon Guard have a bolstered cavalry, now. I added two more dragon knights to the fray, and a whole unit of mounted cavalry archers. From a CP efficiency stand-point, I've never been wild about mounted cavalry. Yet, battles with the likes of McLovin and Mercat could be changing my mind...These are armed with crossbows, shield, and spear; a very versatile combatant.

There are a couple pictures elsewhere, but for the record, my griffin is now armored. Yeah, I'm scared too!

What you see here is shamelessly stolen from a hero in Lord Mercat's Mythic Order. A 2" crossbow design. Here they represent very mobile ballistae that are treated like a size 2" Gun. In order to keep from using more compensating figs who can either stand OR shoot, each crossbow is operated by 2 so that moving and shooting can happen on the same turn. 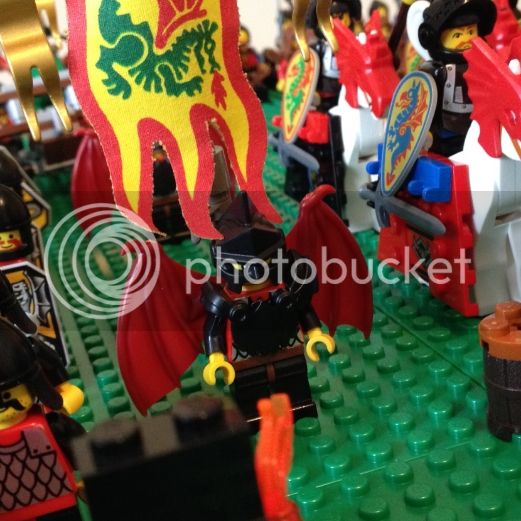 And I have two of these standard bearers. I love the visual that comes from having banners, flags, and standards in a medieval army, so I always try to include them. Brickwarriors Demon Armor houses a stud in the back, which--after a bit of clipping and gluing--works great to accommodate a standard bar clip, even with wings attached. And so we've got these two intimidating, armored, flying standard bearers. I have no special stats or loud-out for them yet, so if you have any ideas, do tell!

At any rate, this is how the Dragon Guard stand in 2014. I haven't had a battle in AGES, so if you can't tell, I'm just chomping at the bit for an opportunity...

Very nice! I like the dragons and the Fire swords especially, although I would suggest giving the dragon riders their hammers back (on the side of the dragon of course) in case they are stranded or lose their Spears due to a crit failure. They also looked very badass with the hammers.
The only unflawed system is Lego System.

Lovely army. Probably the largest medieval/fantasy one the forums?
If you're not into Metal you are not my friend!
Top

Apollyon wrote:Lovely army. Probably the largest medieval/fantasy one the forums?

Probably close, but I'm not sure; if I recall, Brag's Bulls are pretty large or were at some point. And Zahru's combined Empire or Evil faction probably exceeds this. I might run for largest uniform medieval army, but idk...
For Your Reading Pleasure: Rev's Battle Reports

Though I mostly aim for around 30 guys per faction (ideal for a battle imo) the Falx have even more guys. But the largest army is probably Warhead's Army of Eevuuul.

Either way, seeing this makes me wish my armies weren't in the jumbled-up state they are now 'cos there's nothing like a medieval horde. I should probably get to work on that and mix up some mayhem.

Bragallot wrote:Though I mostly aim for around 30 guys per faction (ideal for a battle imo) the Falx have even more guys. But the largest army is probably Warhead's Army of Eevuuul.

Oh right! I had forgotten about the Army of Eevuuul, probably because I don't think it was ever in a forum battle or batrep.

Edit: I just looked up the Army of the Damned; in it's last thread update I'm counting approx 84 figs, somewhere between 9 and 12 skeletal horses, Centaurs, a harpy, a chariot, a catapult, rat swarms, and I think he was working on a bone-giant? So it is indeed larger than mine.

I would agree, though, 30 troops is a good brawl size.
For Your Reading Pleasure: Rev's Battle Reports

Yeah... The bone giant is finished, later in the topic. There's this pic which I can't find right now somewhere where he has both armies lined up against each other, it's massive... 'cos in addition to the undead doods there's also a bunch of 'Gnoll Assasins' and other stuff. Maybe that's also part of the reason we haven't seen them in a battle yet

As long as this army has Darius, it is the best hands down

OT Swords. These guys just keep getting better and better. One of the top fantasy armies around. The Dragon Masters are definitely my favorite, they look so classy.

Bragallot wrote:Yeah... The bone giant is finished, later in the topic. There's this pic which I can't find right now somewhere where he has both armies lined up against each other, it's massive... 'cos in addition to the undead doods there's also a bunch of 'Gnoll Assasins' and other stuff. Maybe that's also part of the reason we haven't seen them in a battle yet

As long as this army has Darius, it is the best hands down

Hoping to do another small-scale forum battle in the not too distant future; I just need to focus on furnishing my house, atm. Darius will be there

It's about time I witness the political implications of my villainy

I really want to copy your horse barding design.
If you're not into Metal you are not my friend!
Top

I'm sure it's been posted other places, but what is one more time for expediency, right? Step 3: (the picture is a little blurry. The black piece holding everything together is a 1x4 black tile) I remember those pics!

most of those are oldschool medieval figs. i only ever had a few of them, most of them I traded a friend for.
Faction Index - Flickr Gallery


You can't ride a scooter when you're drunk and 9 years old.
Top
Post Reply
41 posts