Once upon a time, on the magical world of Ekvestria...

A new race of bloodthirsty creatures are about to descend upon the Brikverse - the Pwnies. They believe that friendship is magic, magic is power, power is subjugation, and subjugation is warfare. So they befriend their enemies through massive warfare and killing.

To the left we see The Great and Bighorned Dixie, who hides her horn under a wizard hat. When asked why, she replied "It's because my horn is so big, it would drive everyone crazy if they saw how big it is. It's not because my horn is tiny or anything. Oh no."

To the right is Scarcity, a Pwnie with massive and inexplicable sex appeal. She has been known to seduce not only Pwnies, but also minifigs, dogs and even dragons. How such physically different species can feel attraction to her is a mystery.

Here are a couple of Kamikaze Pwnies. Seldom long-lived, the job of these winged Pwnies is to crash into the enemy lines from the sky, taking as many foes with them as possible.

To the left is Offensive Hooves, whose fondness for ableist, sexist, racist, and homophobic humor makes everyone uneasy around her. This got her pulled from kamikaze duty and placed in the propaganda ops, allowing her to survive long enough for this photoshoot.

To the right is Flutterdie, a Pwnie adored by all animals. So adored, in fact, that she has been able to train them to kamikaze for her. And if some poor little animal can't fly on its own, it doesn't need to feel left out - Flutterdie will lift it up into the sky and drop it on the enemy! While conservative generals might consider this cowardice, no one can deny that Flutterdie's kill score is much higher than most kamikaze Pwnies (seeing how they rarely last more than one mission).

And finally, we get to the Redneck Pwnies. They are good at... uh... they make booze and get drunk a lot. And have big families. Yeah.

The one to the left is Appletack. She's your average Redneck Pwnie. Like all of them. She likes apples, booze, and hanging peaches from the closest tree.

The one on the right is Big Wackintosh. He's one of the rare male Pwnies - much like how the vast majority of minifigs are male, almost all Pwnies are female. Big Wackintosh is Appletack's brother, son, cousin, and sweetheart.

Kamikaze: (+1 CP) If a Kamikaze Pwnie is killed from crashing into something, it deals 1d10 Explosive damage.

First the Fiends and now this? What is the Brikverse coming to?

Kill them! Kill them with fire!

Here is there anthem of glorious war!
http://www.youtube.com/watch?v=ATweJ39VkqY
Top

You live in Sweden, right? You should be so thankful, otherwise I'd be there with my army in an instant and brikwar those penises back into the hell they spouted from.

(I heard the show itself is actually quite decent, but silva ruined it for me).

Now if i ever get some pink bricks i know what to do wih them...

Anyway, lovely creatures. Are they a design of your own? And 1x1 bricks with eyes printed on would probably look much cuter than your solution with transparent 1x1 plates for eyes.

If you're not into Metal you are not my friend!
Top

Eyup, my own design. I'm pretty satisfied to get it done with such basic bricks.

Bricks with printed eyes are cool... but they only have an eye on one side. Maybe if I printed some stickers? I think the current eyes give them a more menacing look though.
The Disc Wars
Top

Even though i don't care for the poniefandom i do like the design of these pwnies and the use of plates rather than eye bricks have another advantage since in my opinion they look quite sinister with their slit like eyes.
And unlike Colette I do live in Sweden however you will not have to worry about waking up to the sound of a tiger-shark hovertank being thrown through your window as I am quite tolerant!

Anyone build a carebear faction yet? I think that would be a good fight.... 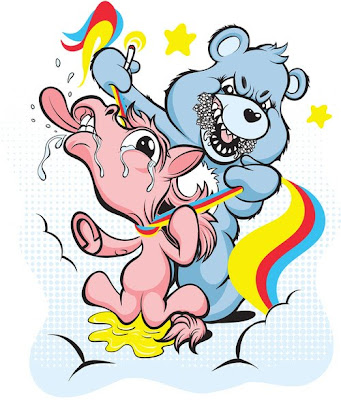 This got me to start watching the show. Tommorrow I'll watch and if it's decent I might just become a Bronie. I'm okay with this, only for the fact that they come apart into many, many pieces.