Somewhere near the edge of the Empire, a pair of swordsmen are on their usual daily patrol along the riverside.

Swordsman #1: 'The past few weeks have been awfully silent, haven't they? We did not have any ork parties scouting around.'
Swordsman #2: 'Yeah, I suppose the prince's raid was successful enough to led them into disarray.'

Swordsman #2: 'Yeah, who's that dwarf paddling desperately?'
Swordsman #1: 'Could it be? Cogni Copperflux! We haven't heard from him months ago!'
Cogni: 'Ey lads, will ye give a soaked dwarf a hand?'

Swordsman #1: 'Sir Copperflux, what happened? We did not receive any news from you since-'
Cogni: 'Aye, since that blasted expedition in Nehekara!'
Swordsman #2: 'What happened?'

Cogni: 'Well lads, I can tell ye but it's quite a frightening tale!'

Cogni: 'So after my last conflict with the undead, I have been lucky enough to find one of my expedition teams whom I thought to be dead!'

Cogni: 'They secured themselves in an ancient ruin, and they found an old tablet which had vital information about the crystal! What are the odds?'

Cogni: 'I did not understand it fully, but I realized that it had a device designed to interact with the crytal I've found!'

Cogni: 'I was risky activating the mechanism but it worked! It was then when things turned ugly.'

Spell-wraith Al-Azim: 'I had enough of your meddling in my kingdom, you insolent whelp! Hand over the crystal and I may grant you a swift death!'

Cogni: 'Of course I wouldn't give it without a fight!'

'The bloody skeletons had the element of surprise and assaulted us, tearing down our barricade and killing a dwarf.'

'But we retaliated fast, slowly grinding away their numbers!'

'The machine slowly powered up in the meanwhile.'

'With unbroken fervor, they began to overpower some of us!'

'Even that twisted spirit entered the fray and gutted one of our lads.'

'I decided to even the scales with explosives!'

'The results were satisfying as always!'

'Me and my lads continued to bash those rattlebone fiends and almost got rid of all of their warriors.'

'The machine kept on working.'

'The spirit conjured a terrifying monster from the fallen skeletons!'

'It began to tear my men apart with great ferocity.'

'Others fell to a barrage of arrows.'

'We retreated back to the device, trying to pick off a few more of their numbers but without avail.'

'The last of my troops got murdered, while the wraith went for my head! Luckily, I had my pan with me to defend.'

'It was then when I realized that this might be the end of me! But Cogni's no coward! "I'll not let you get the crystal!", I shouted, ready to fight.'

Al-Azim: 'Pitiful! You have no idea what powers you are tampering with!'

'It was then the device gave a final click.'

'The ground began to tremble, and eerie lights shot up from the sand...'

'... and from under, a dragon has emerged! But it was huge, bigger than Gallikronn!'

'For a moment I was on the massive creature, but quickly tumbled down from it! It was then that I noticed something was wrong with the beast: it looked old, and dessicated, like a dried-out husk!'

Aetheros: 'AFTER EIGHT THOUSAND YEARS, I LIVE TO SEE THE LIGHT OF DAY AGAIN!'

'Sparks jolted out of its tormented frame as it spread its wings since an eternity! I was horrified; I began to think that using the device was not a wise decision after all.'

Al-Azim: 'Magnificent! Now, bow before me wyrm, for all the undead of Nehekara obey me!'

Aetheros: 'OBEY? YOU COMMAND ME TO OBEY?'

'The spectre had angered the dragon who, in a fit of rage crushed the bone creature with one bite.'

'It then unleashed a breath of what appeared like a thousand thunderbolts at the wraith, who decided it's better to leave and let his minions take the hit.'

'The beast then turned to me.'

Aetheros: 'AS FOR YOU, PUNY CREATURE...'

Aetheros: 'AS MY FINAL ACT OF MERCY, I WILL LET YOU LIVE TO TELL THE TALE OF MY RETURN.'

Aetheros: 'EIGHT THOUSAND YEARS AGO, THE PEOPLE OF THIS LAND HAVE BETRAYED ME! NOW, THEIR DESCENDANTS SHALL SUFFER FOR THEIR TREACHERY! LET THE WORLD KNOW THAT AETHEROS SOARS THE SKIES OF NORTHEROS ONCE AGAIN; ONLY TO COWER AND TREMBLE AS I UNLEASH MY RIGHTEOUS FURY UPON THEM! THE STORM OF RECKONING HAS COME!'

'Then it left. I was mortified, but what could I do? I tried me best to find my way back!'

Swordsman #1: 'That is quite a terrifying tale, sir Copperflux. We shall escort to Capitol City at once!'
Cogni: 'Thank ye lads, but let's make haste! Ever since I can't help but feel that the skies are darkening even as we speak.'

Awsome also, in your medivo battles, what ever happened to that demon-guy whose name begins with the letter x?
Top

Is that rubbery cranium part of the wyrm an official Lego piece?

Great storytelling, battle could be bigger though.
If you're not into Metal you are not my friend!
Top

Apollyon wrote:Is that rubbery cranium part of the wyrm an official Lego piece?

Yes, all of this years' hero factory bad guys have one: 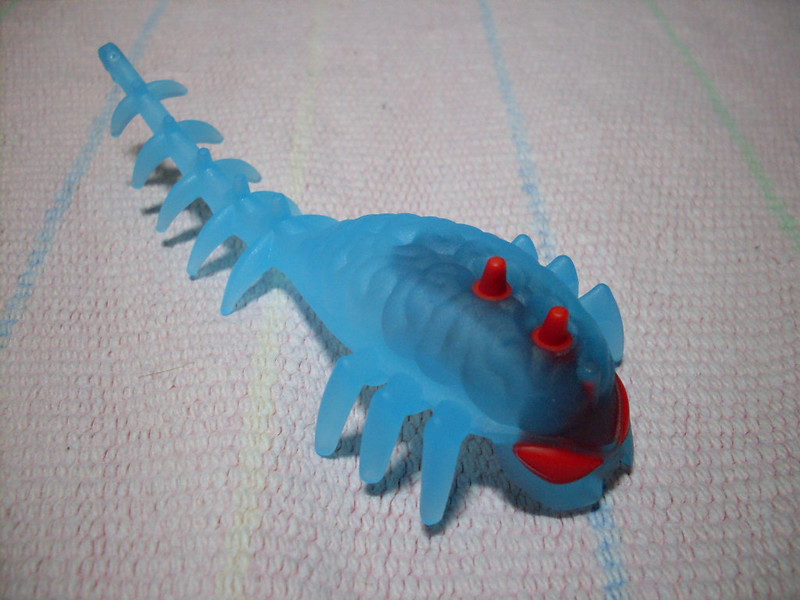 They are officially evil brainslugs that take control of the hosts brain (and they sorta look like facehuggers... brainhuggers?). The one for the dragon is glow in the dark.

Deathwing- Aetheros seems like a nice enough chap, I'm sure the populace of Medivo will like him. Sick MOC.
Fantasy battles
Top

Total: 24.3
This sig is too fucking large: show anyway

The only thing that keeps this from being 5s all across the board is a lack of blood. The dragon is awesome!

Overwatch_Elite
In ™ We Trust Overwatch