by Itsjustaguy
A force assembles at a chink in the armor of the Infernal Legion's impregnable barrier around the Seethian Desert. The river valley that separates the Opulencia Rainforests and the Seethian Desert is the only thing between the Green Coalition and Victory.
Green Coalition: The Azure Shogunate (blue), and their allies the Ice Army (a freelance militant group, colors: Blue and Orange), the Aurech (Advanced militaristic tribal hunters, colors: Orange and Purple), and the Xanthous Conglomerate (yellow). 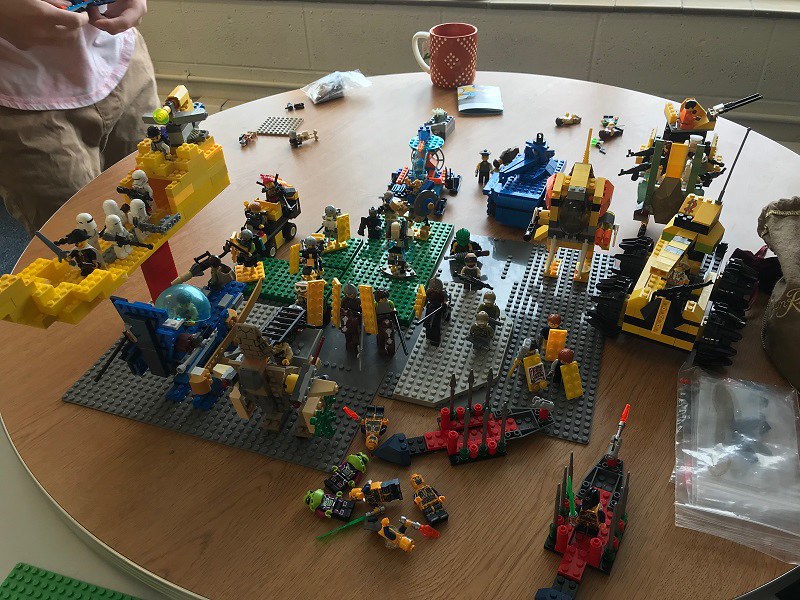 (yes I'm aware the boat is floating, in this campaign, they are skiffs called FLOATS and actually kinda cool, I'll make statcards for them eventually)

Scourge of the Seeth: On the other side of the valley, the Infernal Legion (red) anticipates an attack and enlists the help of the Confederacy of Purity (dark colors and green). They gather a counter strike force behind their barrier. 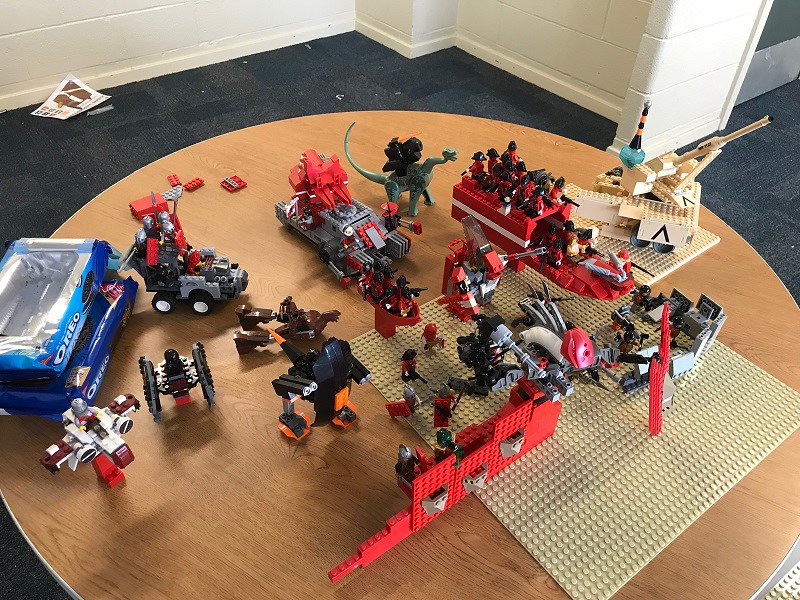 Exiles: At the center of the valley, an amalgamation of escaped convicts, freed construction bot slaves, skellingtons, snake cultists, and sky pirates, take refuge in refurbished sand forts from previous wars. They suspect nothing as the crescendo of the Symphony of Death builds around them. 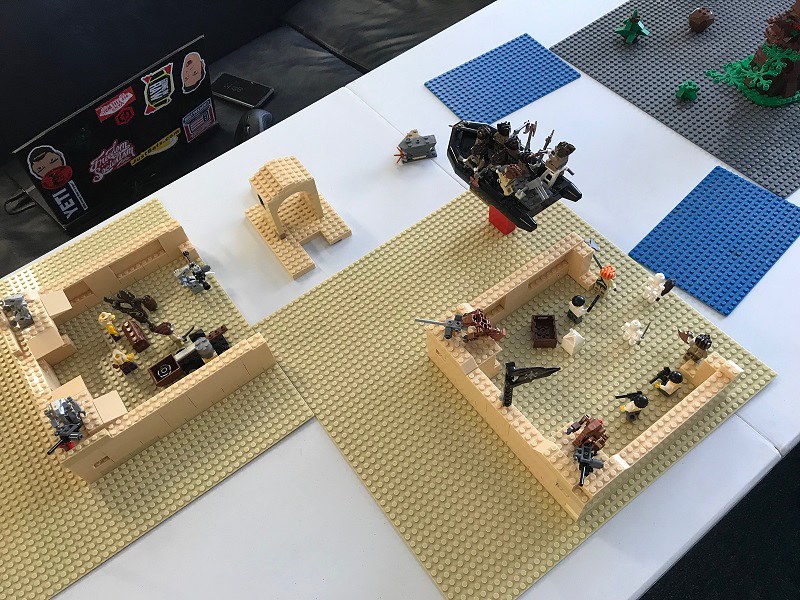 The Green Coalition forces advance at break-neck speeds, an Aurech skiff shifts into overdrive (an ability which allows double movement speed this turn in exchange for half movement speed the next turn) and boards the Sky Pirate FLOAT and immediately begins slaughtering Sky Pirates, but not before the starboard sky pirate firing squad can deal 1 size damage to the Azure Shogunate Knight Mech. 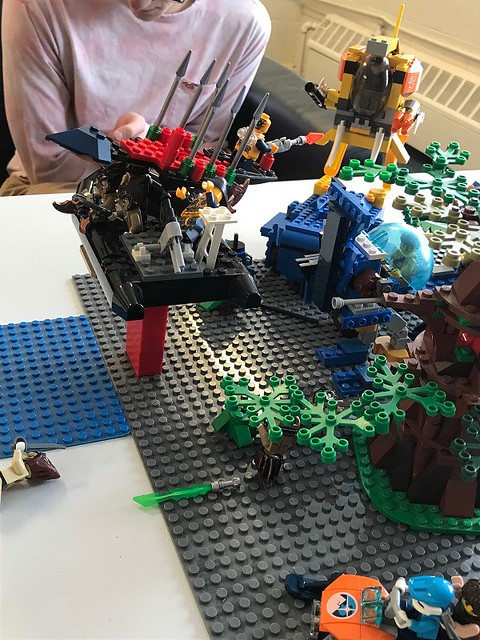 At the same time, the Avian Naval division of the Infernal Legion cracks off 12 shots at both construction bot sentries, the sentries fire back with their 60mm machine guns and manage to spatter just one devil-boi before getting shredded by the hail of bullets volleyed at them. 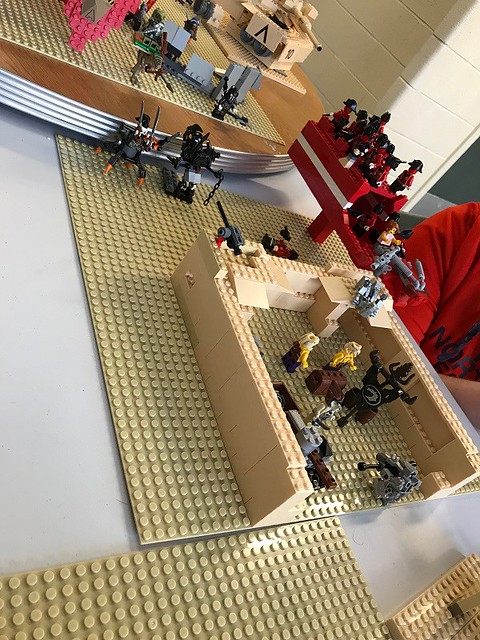 The Infernal Legion continues its advance on the left flank with its armored division, an interceptor flies ahead and knocks down one sentry with a size 2 missile and the other with a successful kamikaze attack. 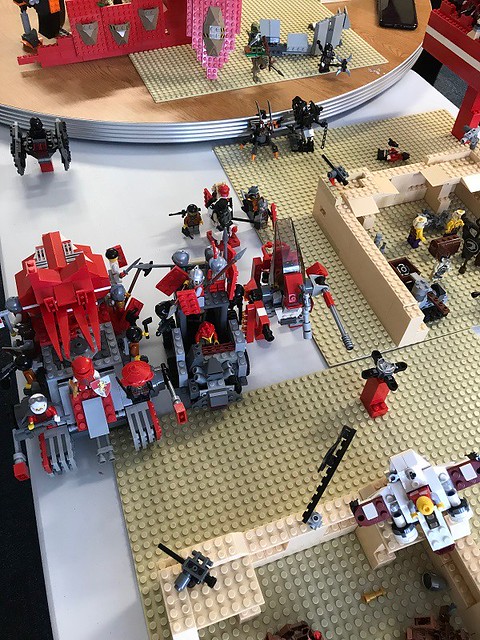 More fighting on the south side of the river: the Ztinger tank knocks out the engine of the FLOAT and only one of the two attacking Aurech Skiffs bails, the rest of the passengers fall to their deaths. But as they are falling the Sky Pirates manage to take out the Ztinger's heavy mounted railgun. The Ztinger advances across the river with its amphibious ability and gets into further shenanigans. 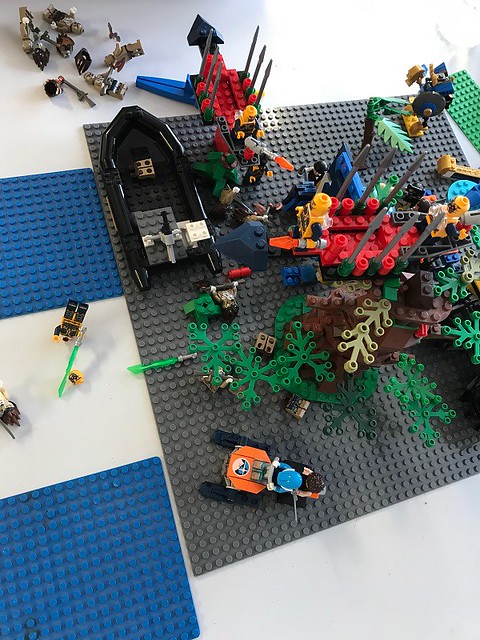 The Red-Devil tank bursts through the wall of the sand fort and kills a few exiles while doing so, they only manage to paint the tank redder. The Ztinger (now gunless) tank charges the Infernal Battleseeker Mech and does nothing. Meanwhile, the Xanthous Conglomerate walker jumps on the bow of the Infernal Avian Naval vessel and kills the piloting crew as the FLOAT sets down on the wall fo the sand fort. The second, smaller, Infernal Avian Naval Vessel absolutely genocides the exiles in the northern fort. 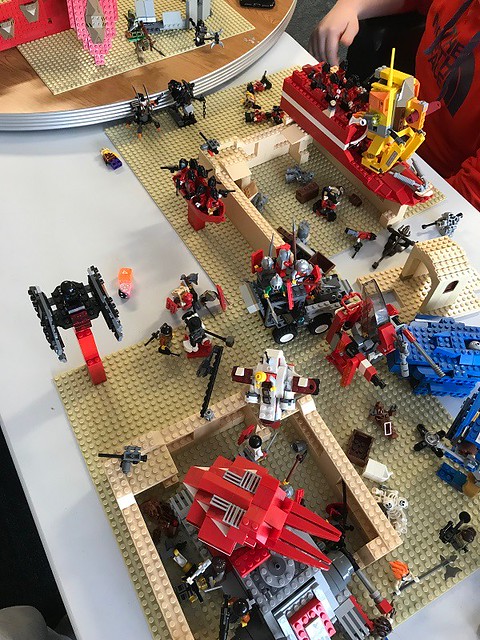 The advance continues on the south bank, a Xanthous Conglomerate rocketeer launches a size 3 rocket at the Red-Devil, which manages to penetrate only the infantry armor the Red-Devil is wearing. 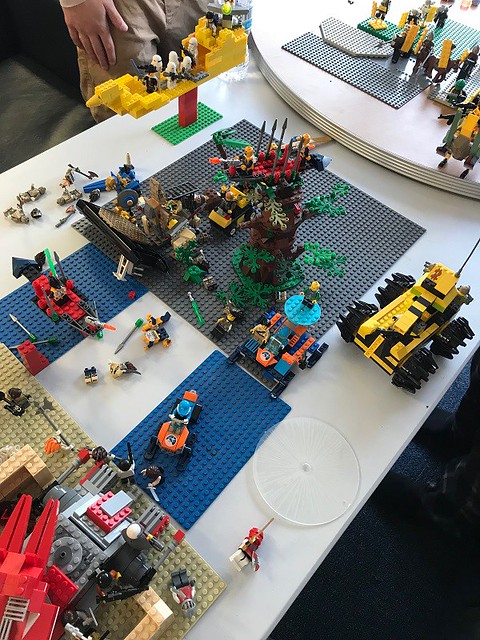 The Aurech Captain pilots his commandeered skiff into the Confederacy of Purity's interceptor (Pestilence I) the resultant explosion of 2 size 2 missiles kills the captain, pilot, and surrounding Infernal Infantry and Mech troops. 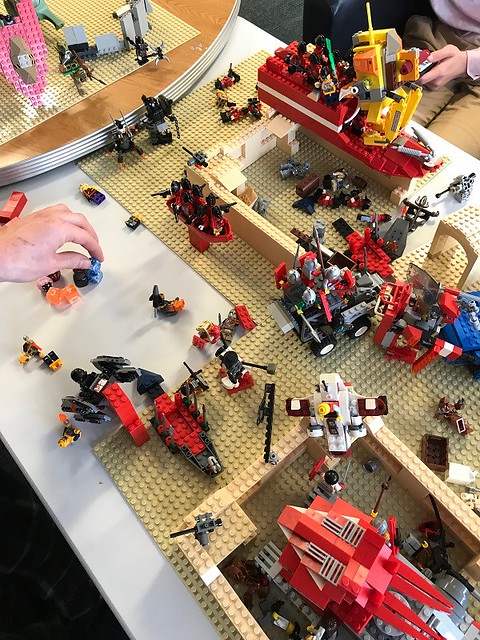 A Confederacy of Purity heroic wizard convinces an Infernal Aviator to help with firing the massive primordial tank's gun at the Xanthous Conglomerate's walker currently standing on his friend's FLOAT. They succeed only in murdering the entire crew of his ship and doing no damage whatsoever to the walker. 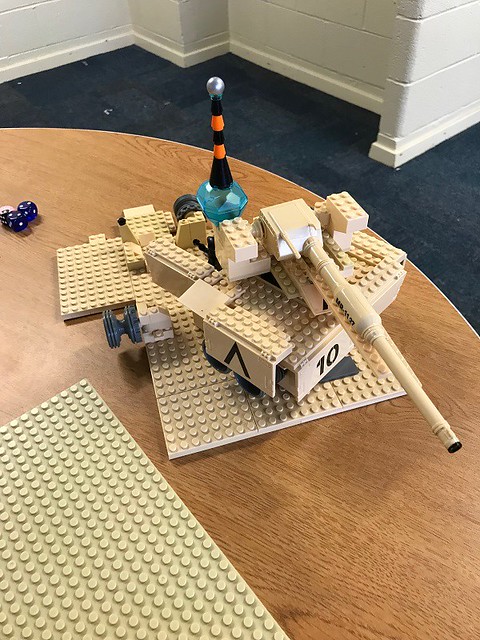 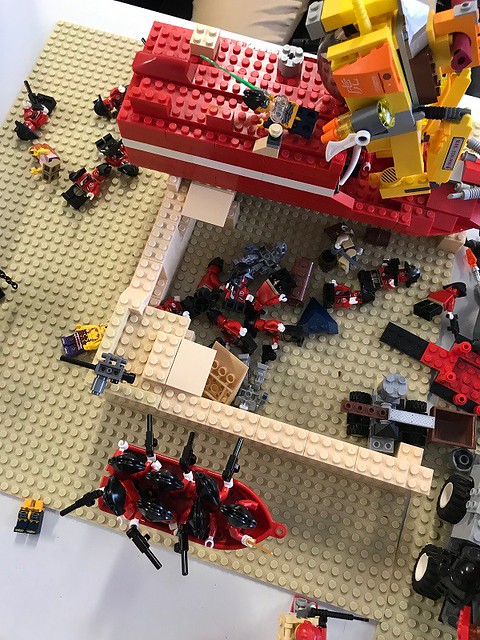 Driven mad by a fit of rage and sadness at the massive betrayal of their brethren, the remaining Infernal Aviators kamikaze their ship while firing rapidly in all directions. They kill a few enemies and friends, until 3 simultaneously misaimed bullets puncture the wrong damn barrel. 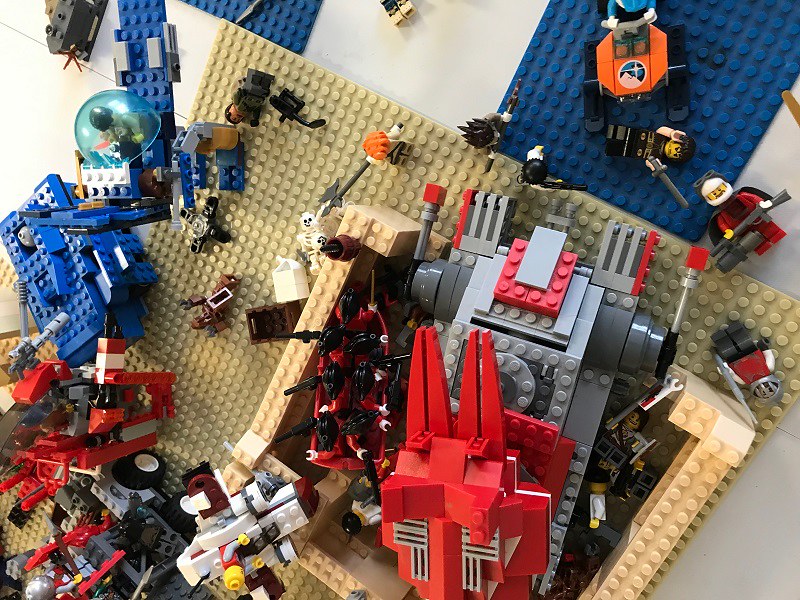 The barrel contains the SCREW OF U, a class 5 legendary item which due simply to its low armor class, was killed by the 3 stray bullets. The screw of you is so powerful and important to the Brikverse, it can't not exist. So instead of it not-existing forever, it blinked out of existence for a 0 moment then back into existence. This change released so much energy that everyone and everything within a 3-mile radius of the screw was destroyed, thereby ending this Brikwar. 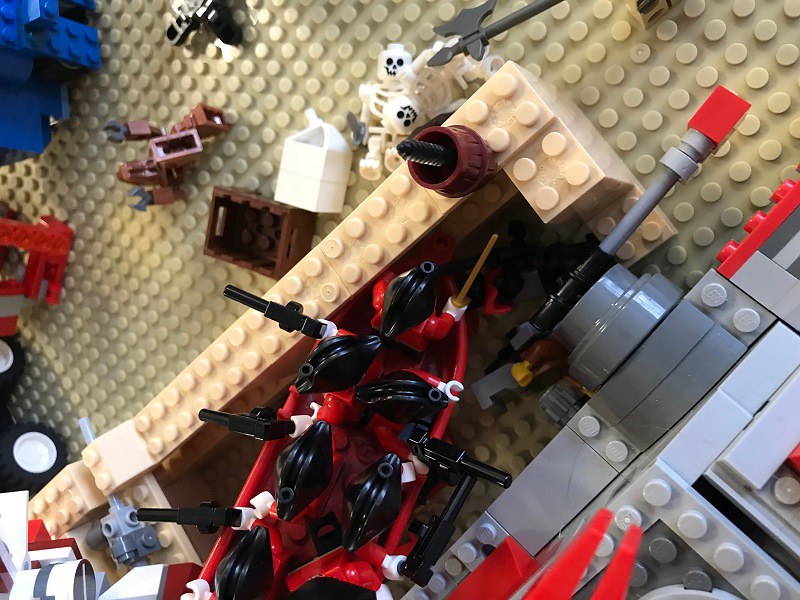 by ninja_bait
Fun - 16 - An in-person battle is always the best, but whatever idiotic in-jokes you guys came up with during play don't get a lot of show here.
Violence - 7 - A lot of crashing FLOATs, hard to tell if any other real violence is going on.
Photography - 6 - CRAZY ANGLES but well lit. Would be nice to get some close in shots of certain acts of violence rather than all wide shots.
Writing - 6 - I wish for clearer turn separation and more flavor text.

by Kommander Ken
Fun: Lots of crazy builds getting into crazy combat, I only wish there were more pictures. 16.
Violence: Pretty okay amount of carnage here, if only there was moar blood. 7.
Photography: Clear and crisp photography here, can't complain! 9.
Writing: While the descriptions are great, this one's more aligned with the 'wish I had more pictures' thing. Would love some dialogue mixed in with the in-jokes. 6

Re: [RK19] Clash at the gates of the Seethian Territories

by Bookwyrm
Fun: With Ken here. Lots of cool builds I can see, just wish there were more pics to go off of. - 15
Violence: I do see that there was definitely violence here, especially at the end, so I’m not gonna mark you down for lack of blood as I suspect you probably don’t have bags and bags of red 1x1s like some of us. If that is indeed the case, I’d suggest more dismemberment of legs and heads to convey the carnage more visually. - 7
Photography: Photo quality is pretty good overall, just needs a lot more of them! Also there’s a couple pics that would look better if you rotated them, would help with some of the squirrely angles N_B mentioned. - 6
Writing: This goes hand in hand with the photos, the writing that’s there is good, but with more pics you’d have more material to work with to do dialogue and stuff. - 6
Story: There’s the bare bones of an interesting narrative here, but like other categories needs more fleshing out to be really good. - 6
All times are UTC-05:00
Page 1 of 1
Powered by phpBB® Forum Software © phpBB Limited
https://www.phpbb.com/