Eldon, First of His Kind

Eldon, First of His Kind 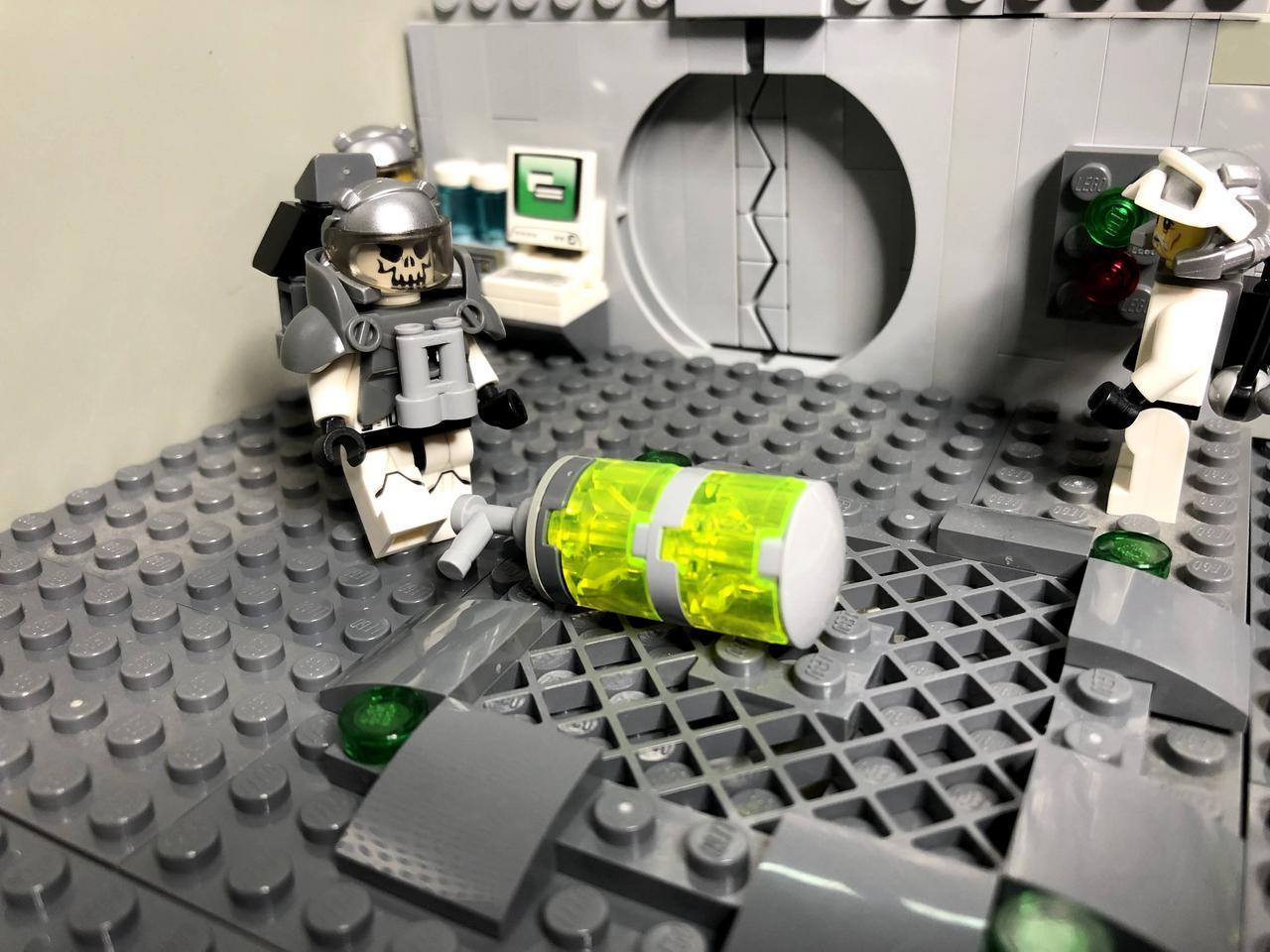 Eldon stared at the glowing green container, a mysterious liquid bubbling and frothing inside the casing. The Matter Machine hummed with power, the heart and soul of the battles that Skion had won to begin colonizing this planet.

"What is it?" he asked the technicians nearby.

"It's Maniac Beer," one of them answered, typing away at the computer terminal for the Matter Machine. "We don't know much about it."

"How do you know what it's called, then?" Eldon asked, eyes shifting between the two technicians.

The technician continued, "We found it in the deepest bunker of the planetary command base. They put so much effort into guarding it they could hardly even defend the rest of the planet from us. Once we cracked their language we found signs all over identifying it as Maniac Beer. We are currently going through their data banks to learn more."

"What do we know so far?" Eldon asked. 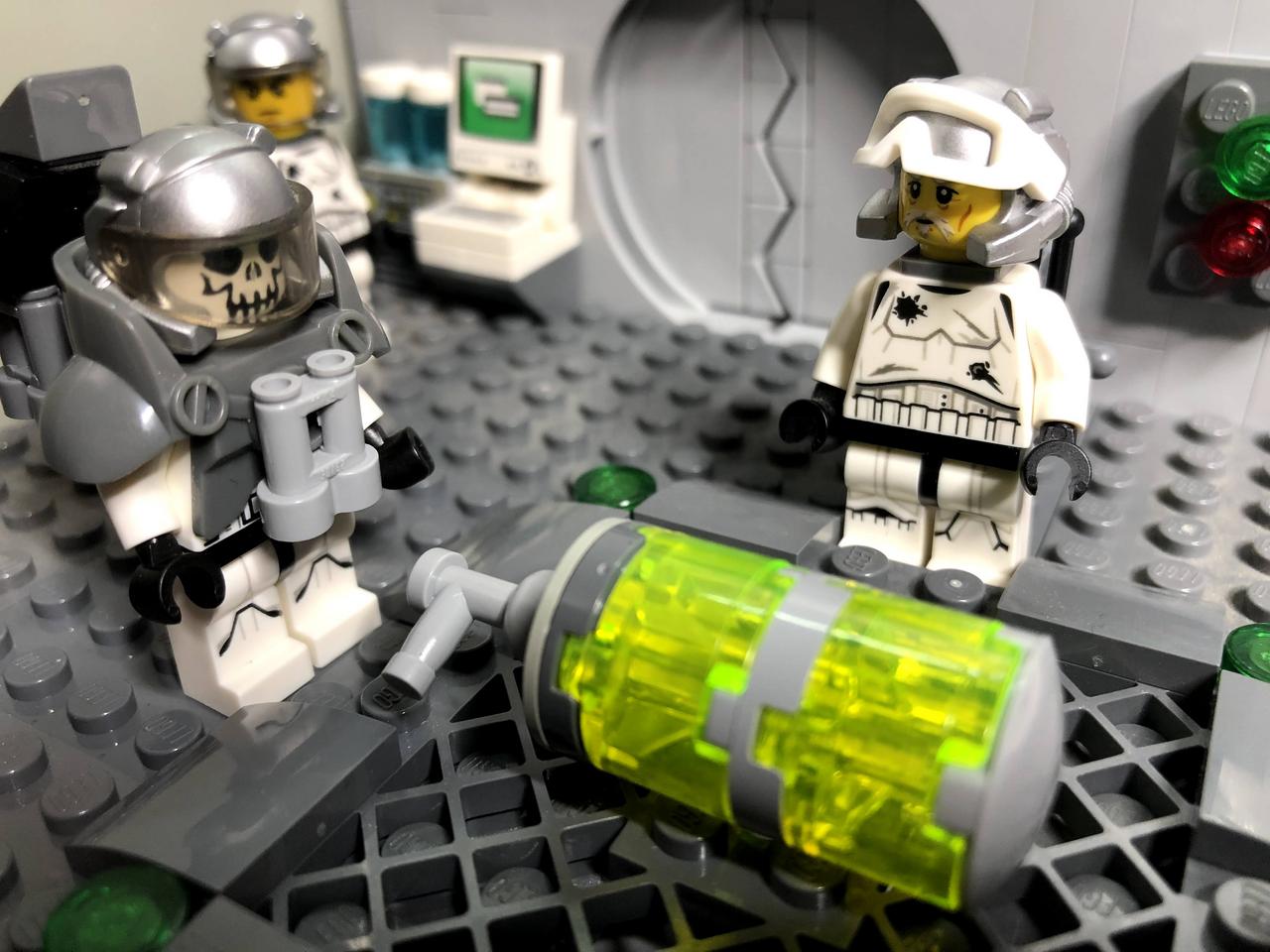 The other technician chimed up, "It was created for a spacefaring empire called The Immortals. They brewed this beer for their greatest warriors. Apparently, it is a rare and precious thing."

For a moment, only silence.

"And, from what we can gather, drinking it increases combat efficiency exponentially."

"It's something called an 'artifakt,'" the first technician added.

Eldon grinned, "In that case, we should duplicate it, yes?"

"We thought so too, sir, but wanted your approval first." 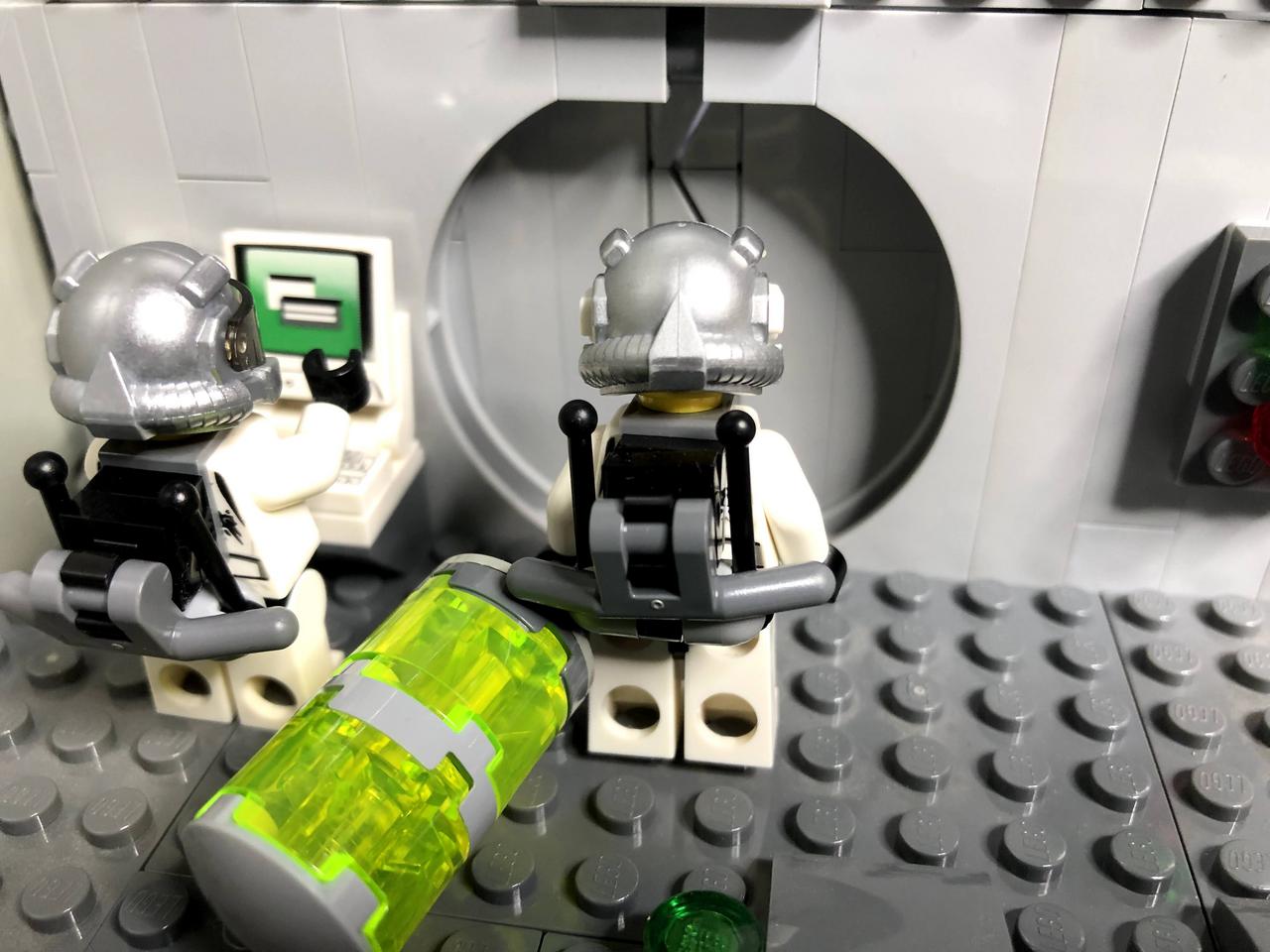 The technician grabbed the keg and stood before the doors of the Matter Machine.

They opened and the empty bay waited. Thousands and thousands of weapons had been created by this machine for the war and now it waited for it's most important task yet. 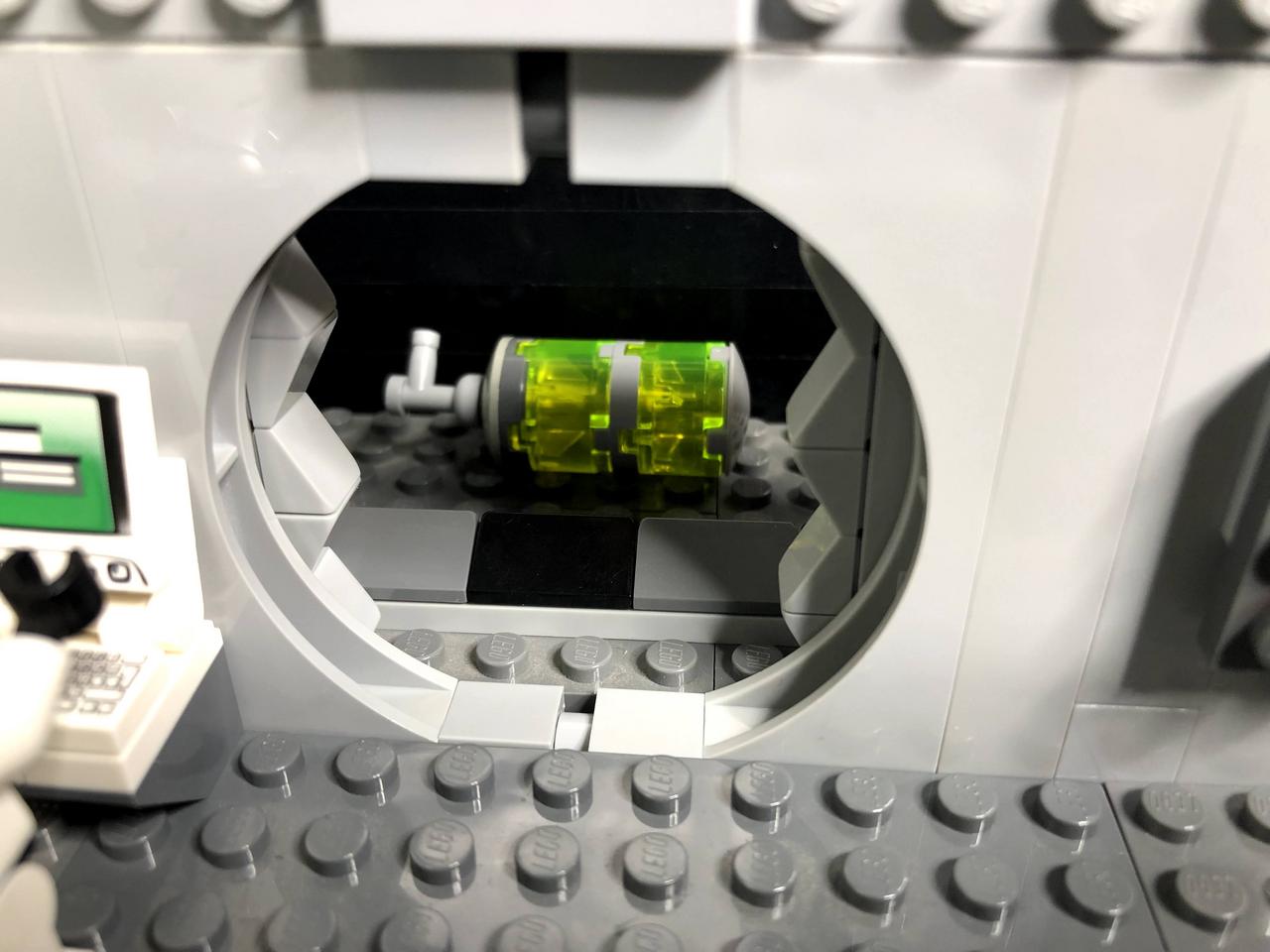 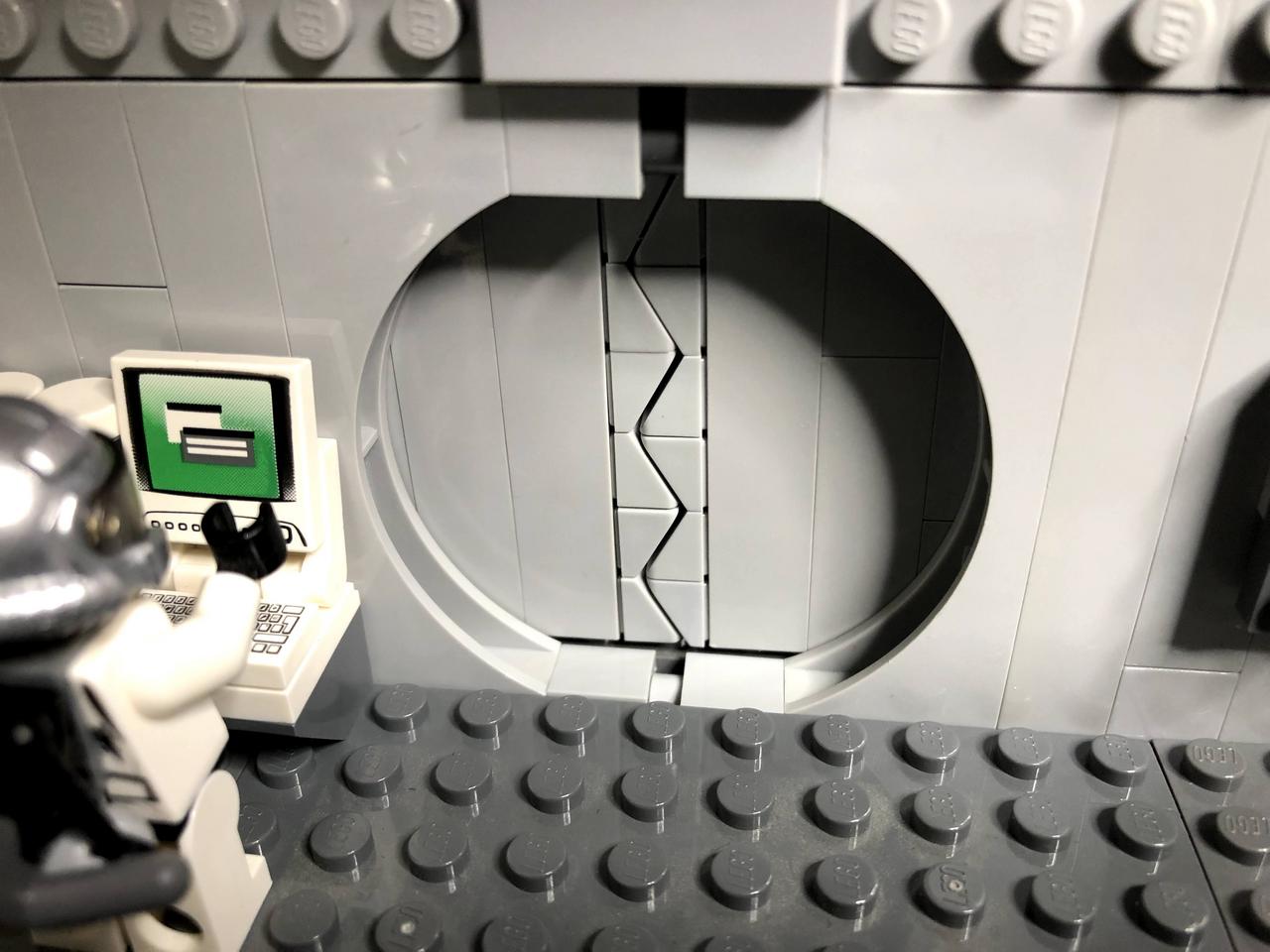 The doors shut and Eldon thought he felt a chill sweeping up his spine. He shivered in his armor, suddenly unsettled. He ignored it, putting it out of his mind. But, in that moment, he felt as though he was being watched. 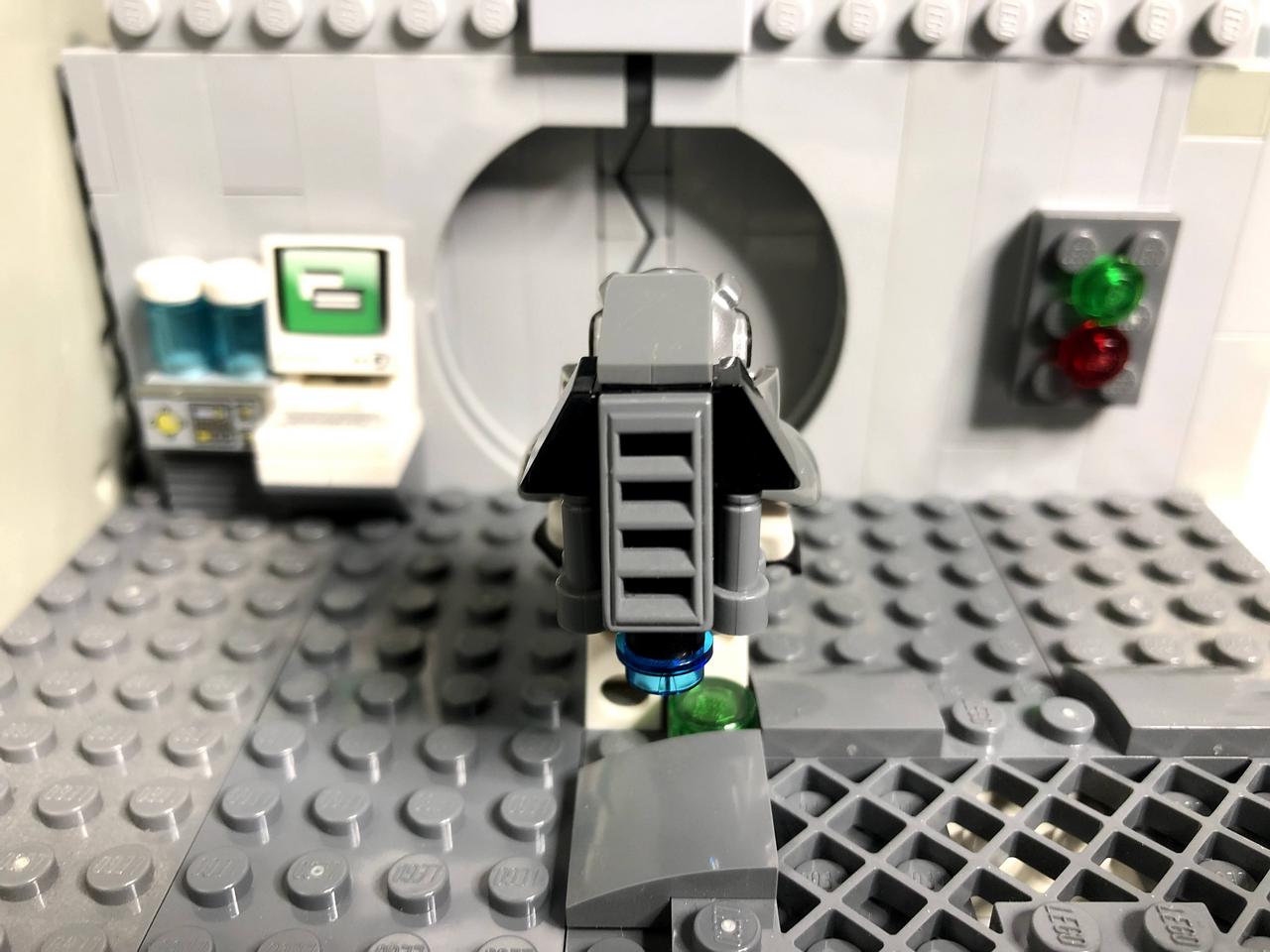 "Do it," Eldon commanded.

The Matter Machine began to boot, the magik pulsing through the circuitry and preparing to duplicate the Maniac Beer.

"Something isn't right," the technician said, looking quizzically at the screen. 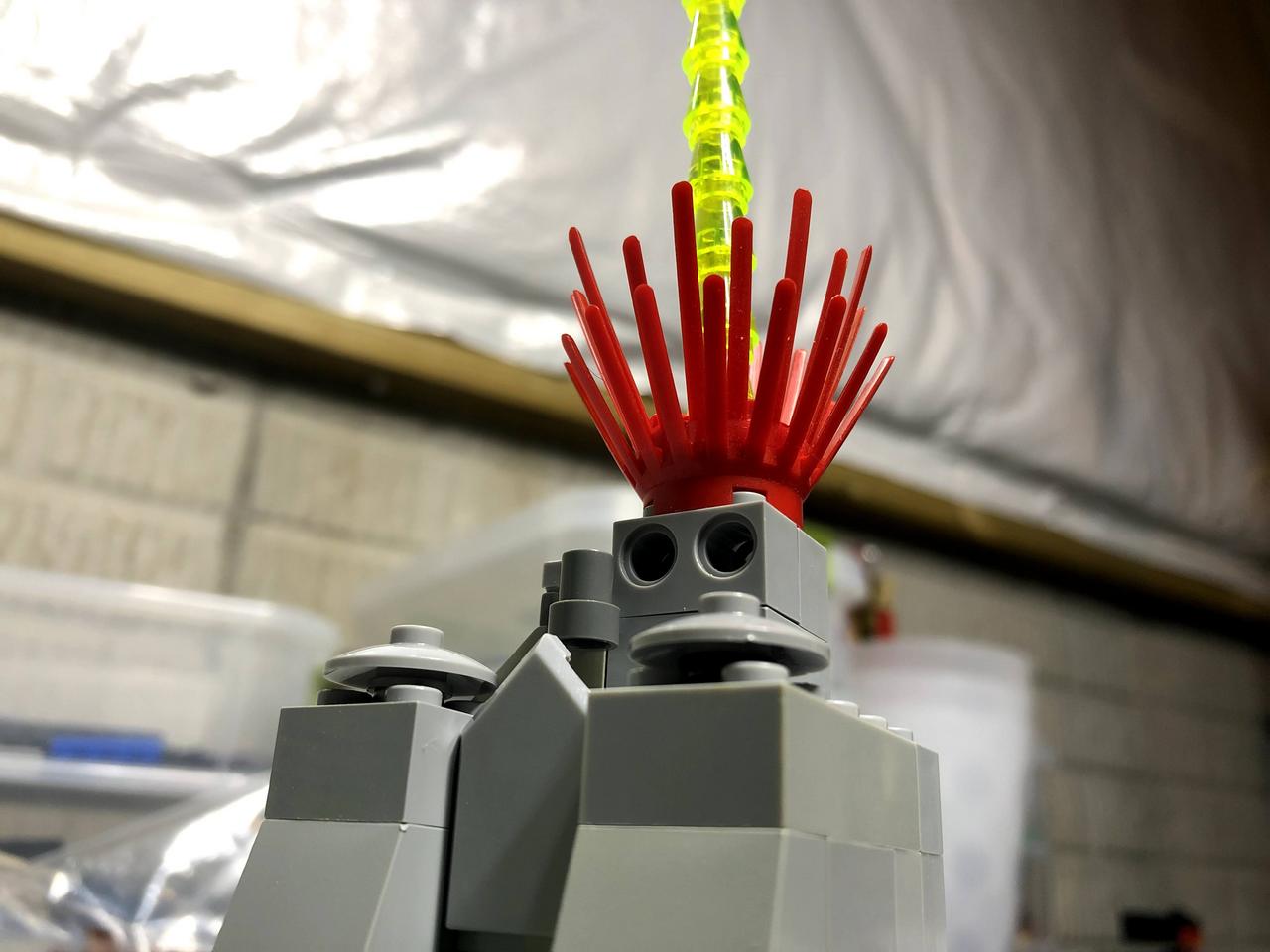 An explosion cut the technician off, a great green glow filling the room along with the odor of ash, smoke, and fire. The building rumbled menacingly, concrete and steel buckling and breaking with the force of the destruction of the Matter Machine. A sickly green flame shot into the sky, swirling in the clouds.

"Geez, shit," coughed a technician, "Are you guys all right?" 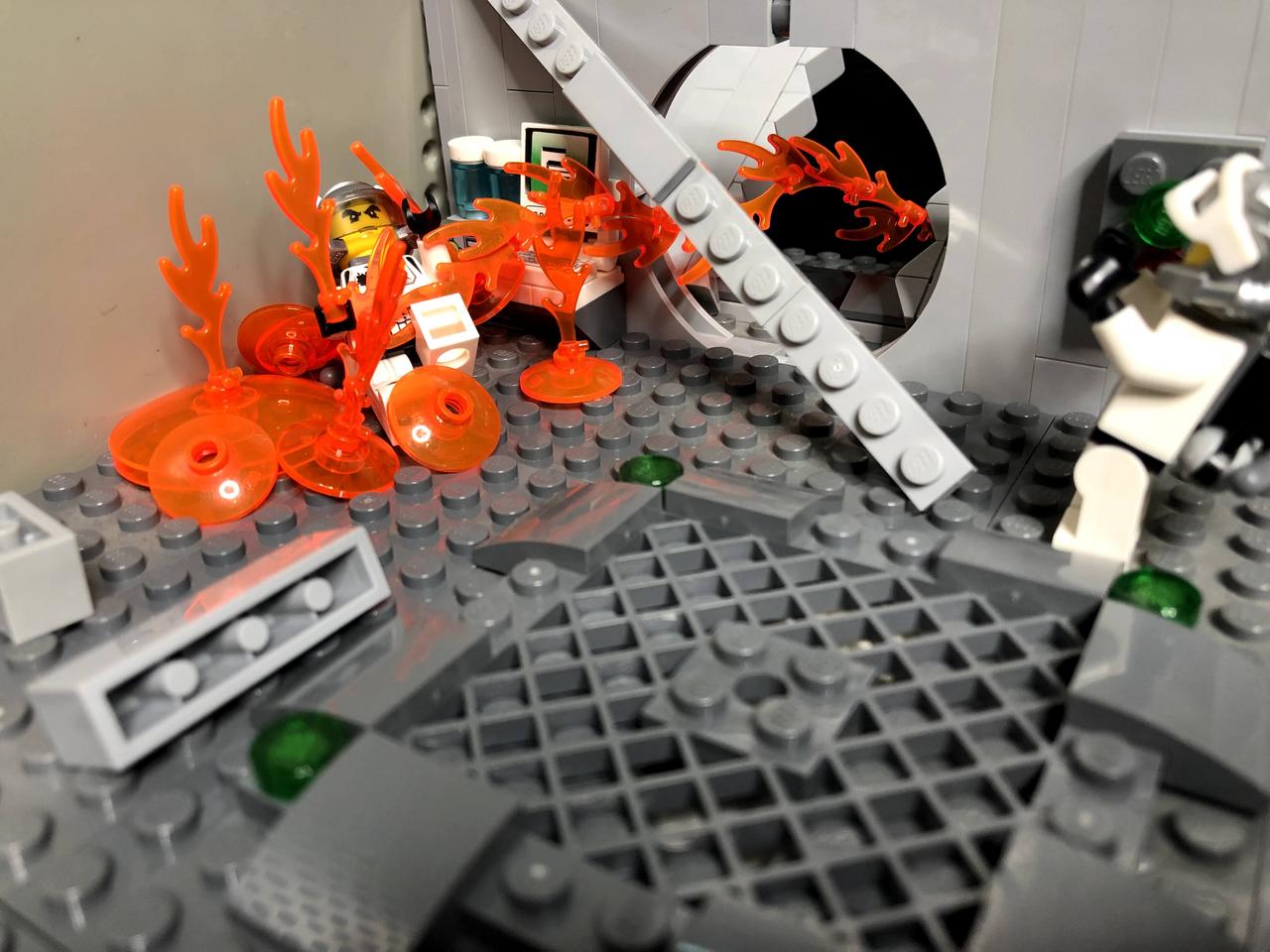 Fire belched from the bay of the machine, dousing one of the technicians. He didn't have time to scream as the jet of flame covered him completely. 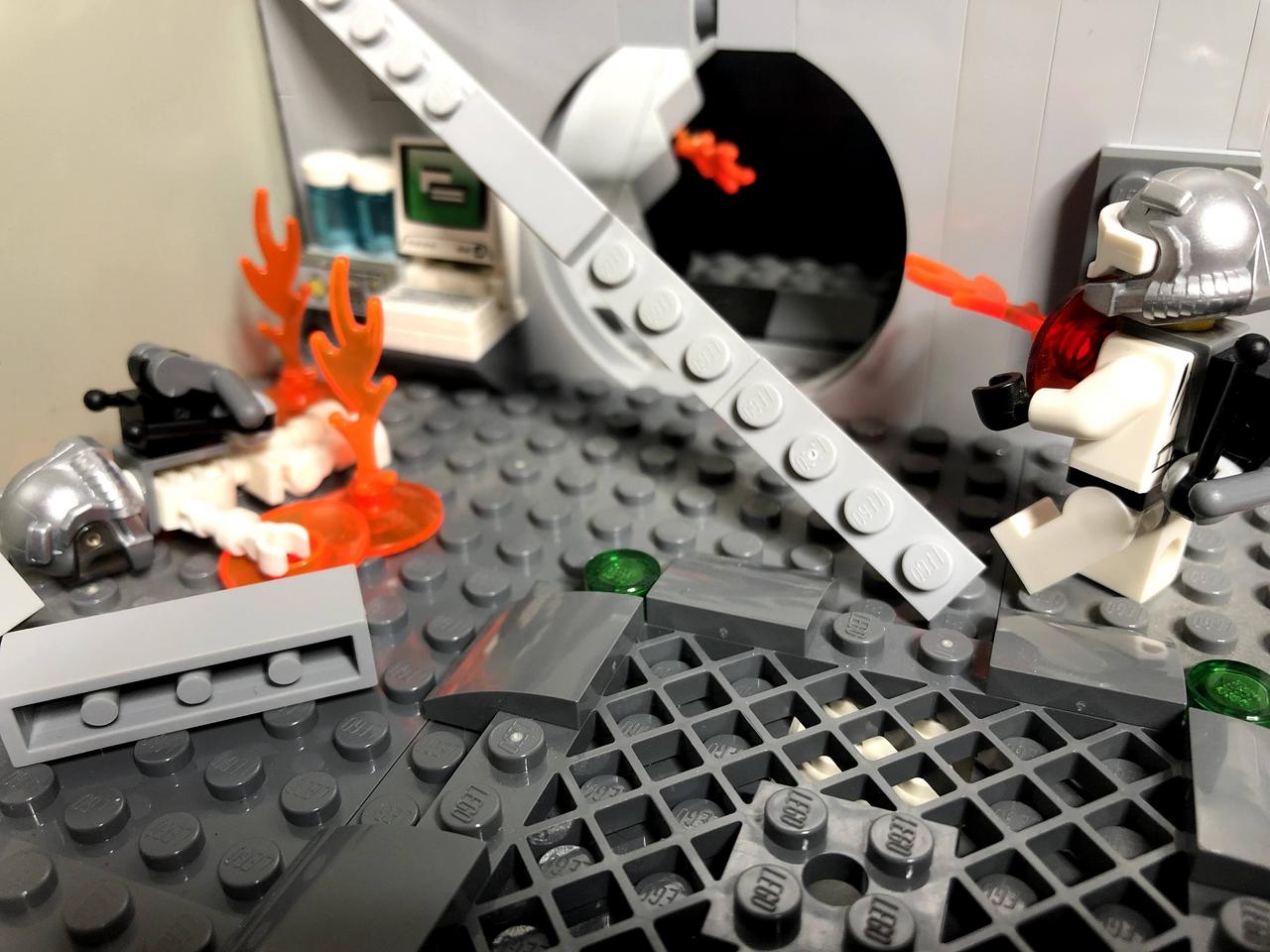 BANG! A projectile tore through the other technician, dropping him into a pile of his own blood. 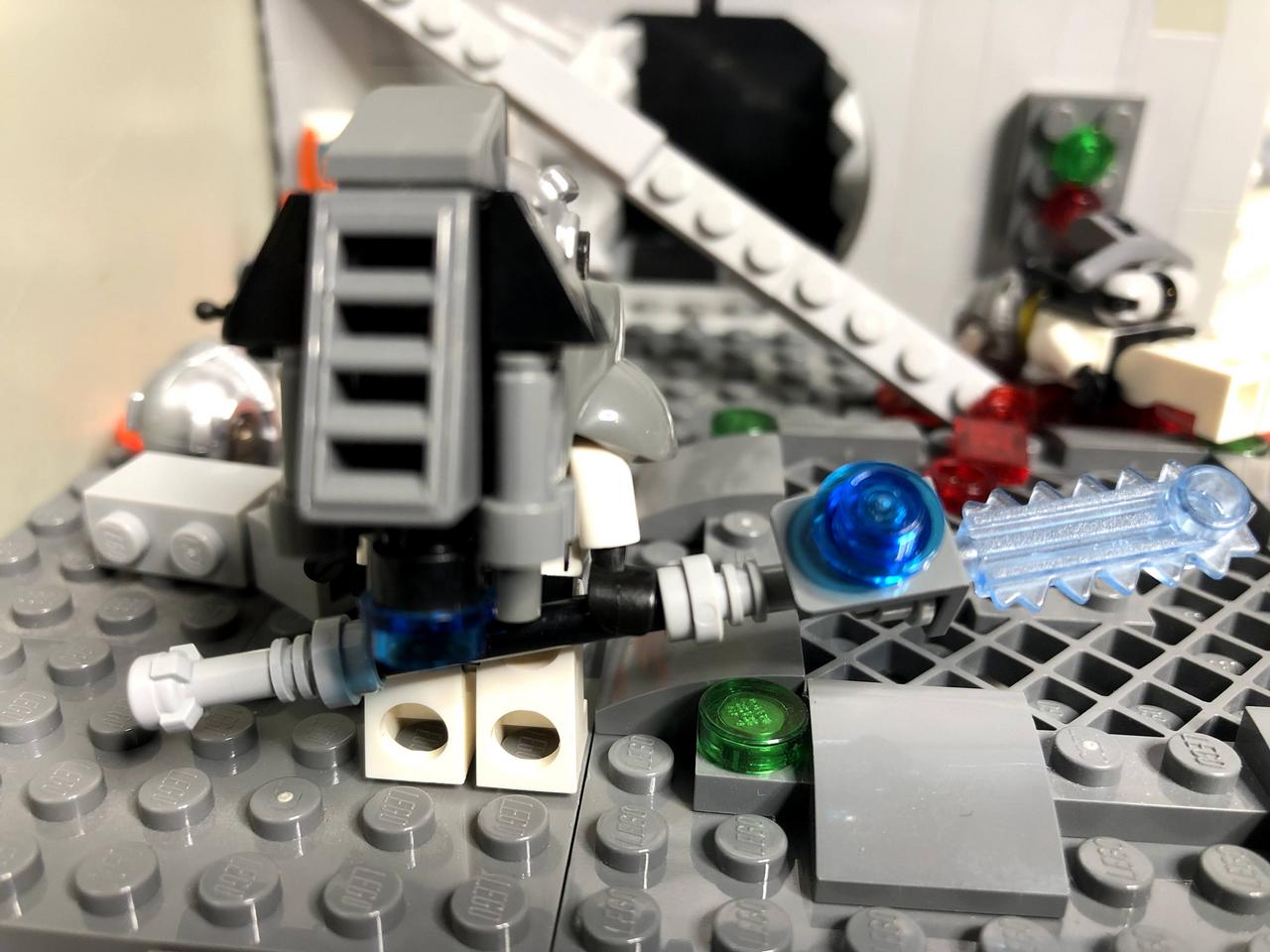 "Come out of there!" he shouted, teeth grit in fury. 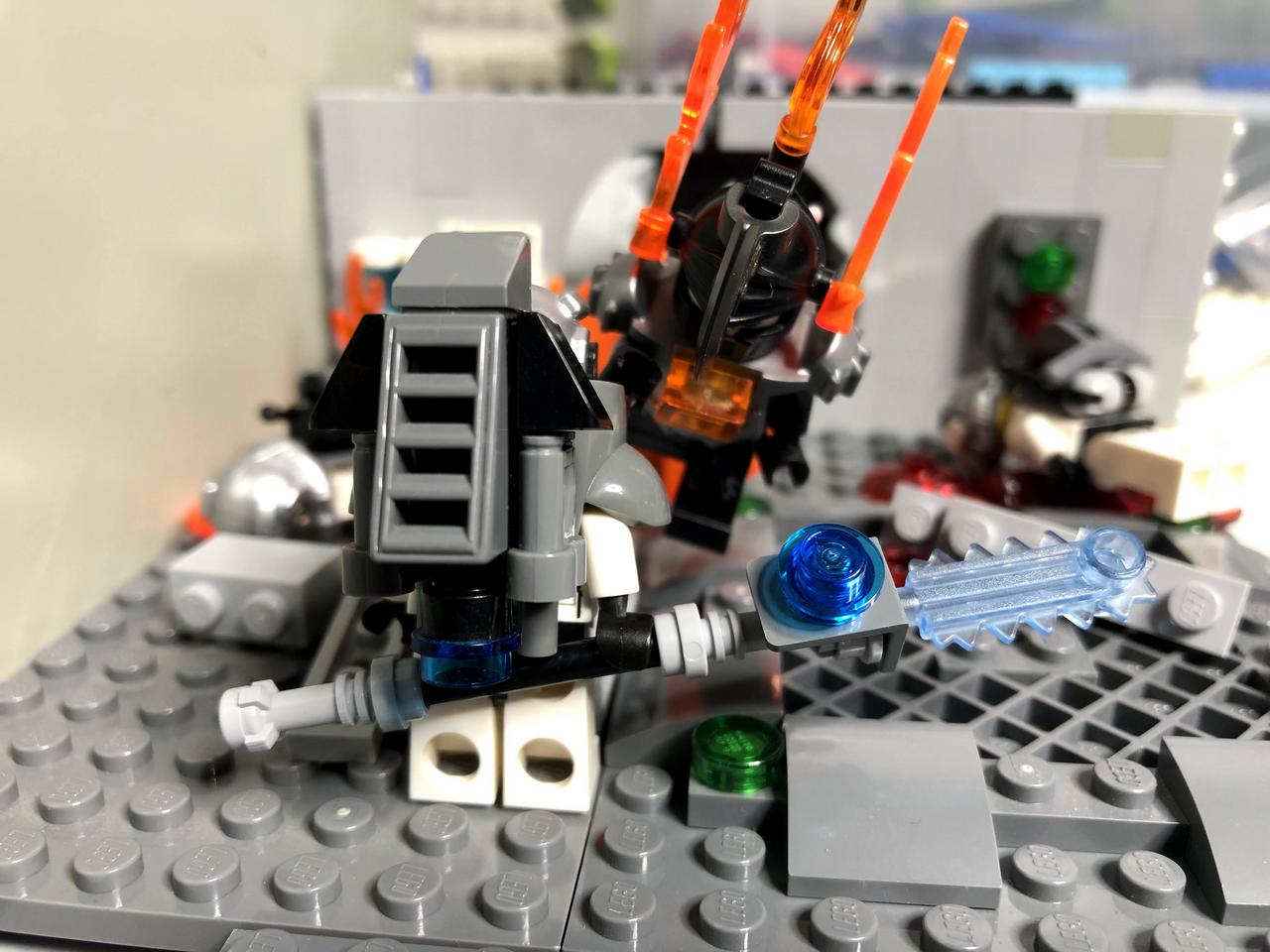 A body, wreathed in flame, shot from the Matter Machine. It flew at Eldon before he could react, slamming into his chest with enough force to knock him off his feet and his weapon clattered to the floor.

The figure drove Eldon to the ground, easily overpowering him with little effort.

"You've never fought one of your own kind, have you, hero," the black-clad figure said, words dripping with sarcasm. "It's not as easy as the waves of mindless goons you've become accustomed to!" 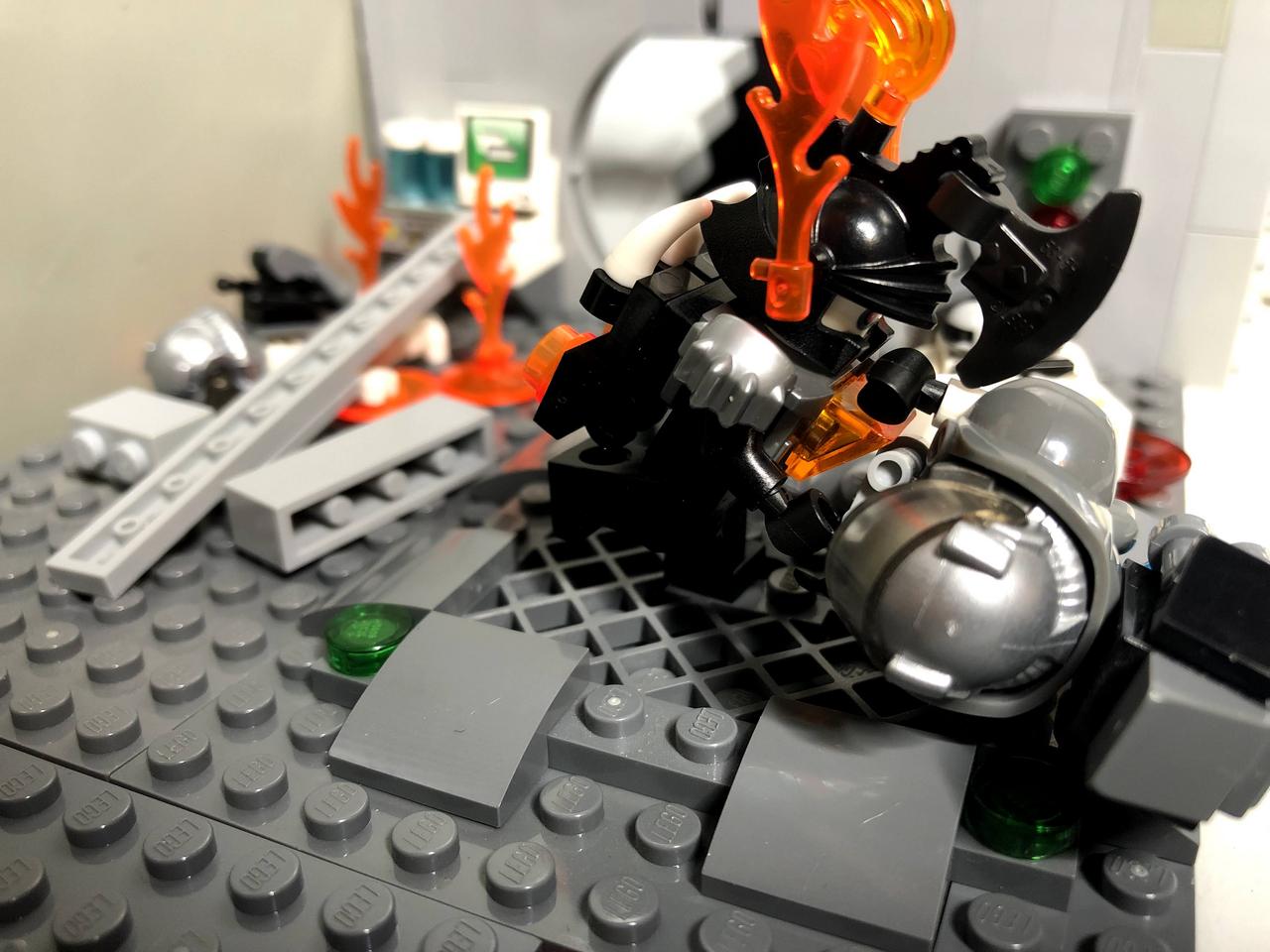 Eldon couldn't get his feet, scrambling to shove his foe away. With a grunt he was slammed into the concrete, buckling it around his jump-pack. 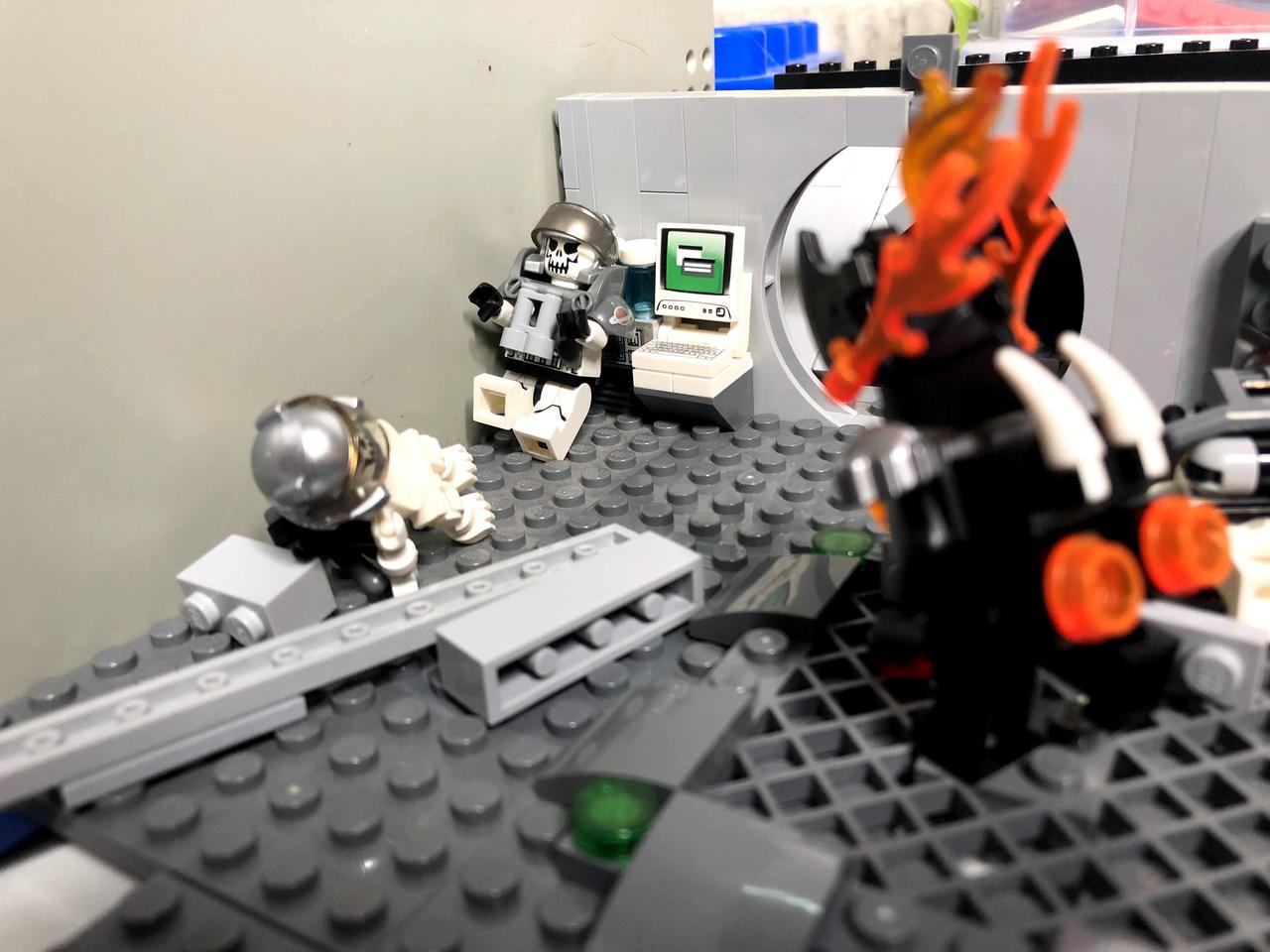 With a flourish the figure tossed Eldon against the wall, spinning in delight at the crunch of armor and steel.

"What... what the fuck..." Eldon sputtered, tasting his own blood.

Slowly, the figure walked to Eldon, standing over him in arrogance. 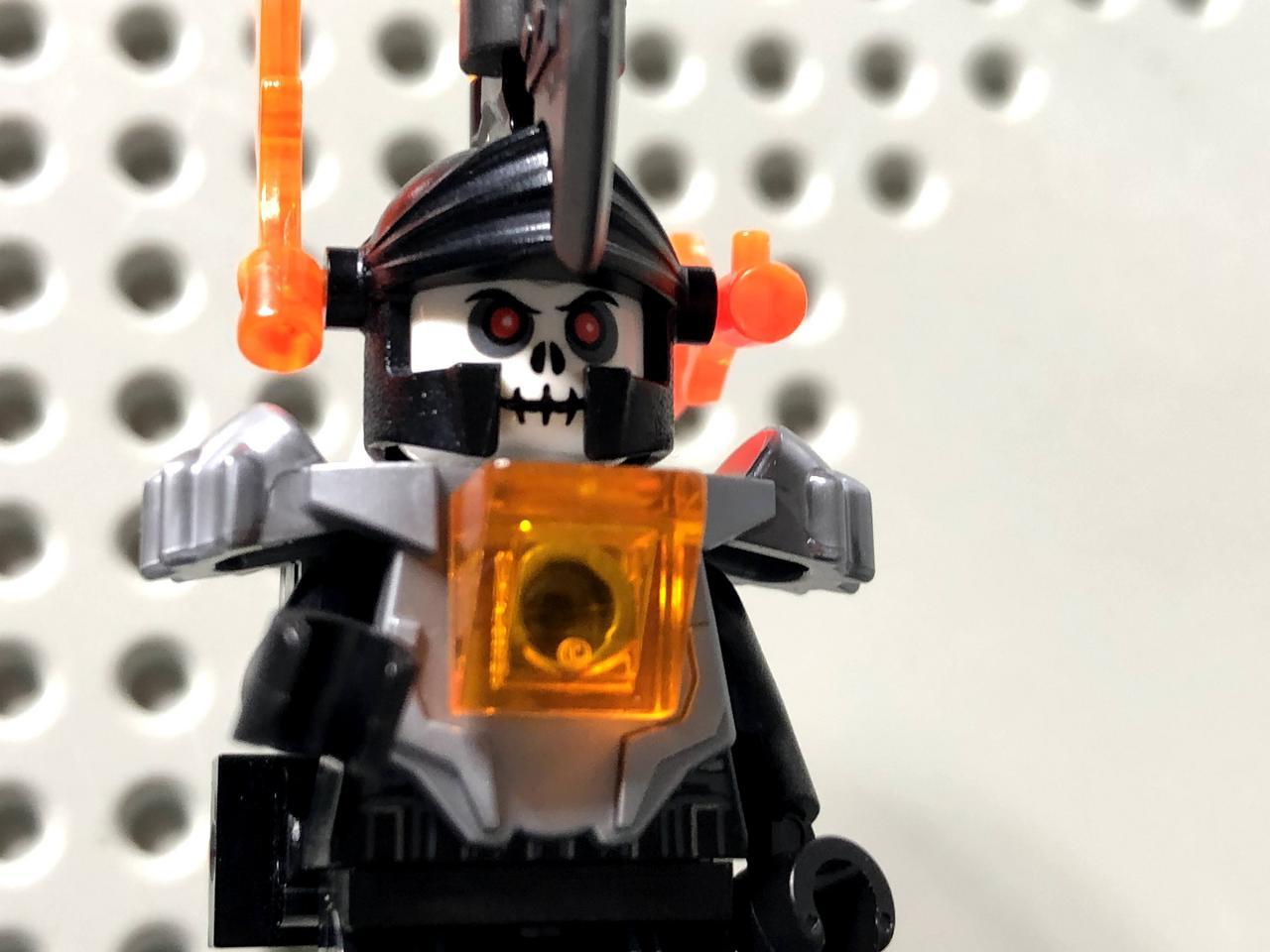 "I am the Lambda Shard," the figure began, "a piece of the mighty Warhead, tasked with bringing his war to the stars."

He picked Eldon up by his throat.

"And you're meddling with my fucking beer."

He drove Eldon into the wall.

"You think you can just duplicate my fucking beer with some silly magik? You think the Immortal Empire would allow such a disgrace? And, to add insult to such a grievous injury, you've painted your face into a skull. How appropriate. How disgusting. You think you've earned such a mark? You think your deeds are deserving of such a visage?"

As he held Eldon aloft black veins popped through his skin, growing and crawling toward Eldon's brain.

"You will pay for this transgressions, Eldon."

He dropped Eldon to the floor, letting him writhe in pain for long moments. Soon he sat, rubbing his temple, brain on fire from the intrusion.

Lambda Warhead set a new weapon in front of Eldon, the BT chain blade replaced by glowing and hateful flame. His helmet was broken and reformed.

"You do not belong to Skion any longer, you belong to me." 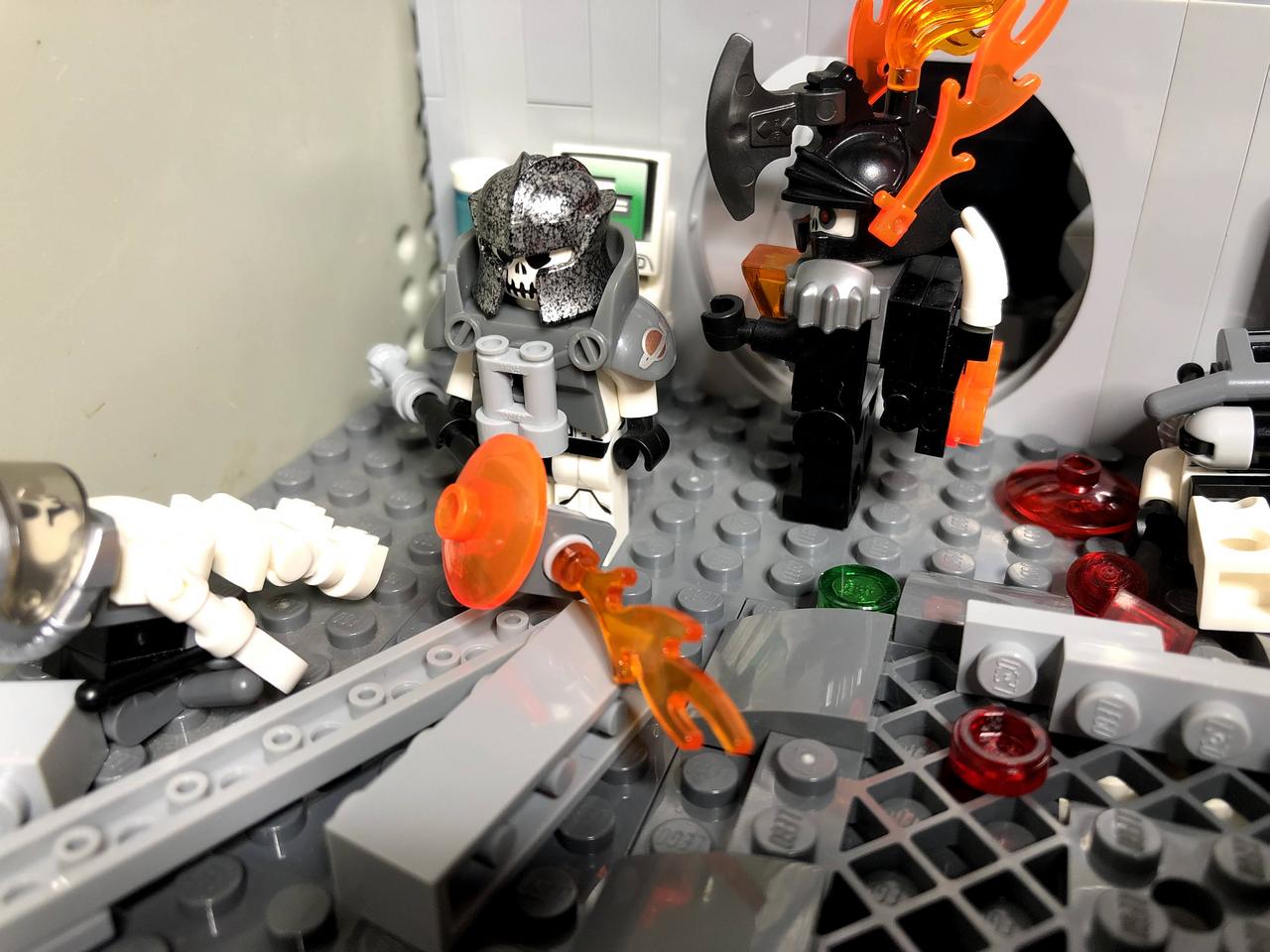 Eldon stood, remade on the anvil of Warhead.

With a sick grin, Lambda Warhead asked, "Tell me what you will do now, Eldon?" 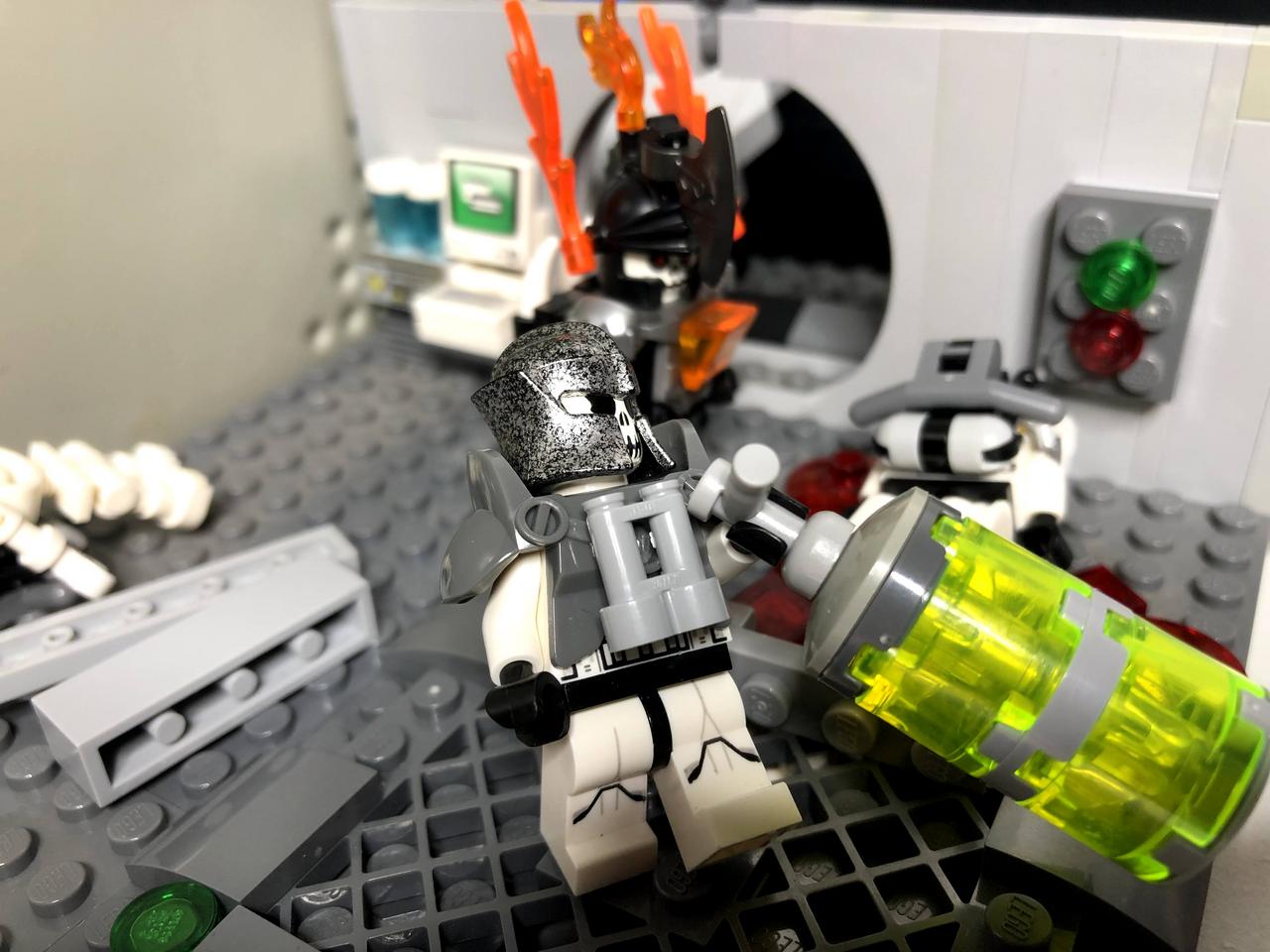 And then Eldon, no long himself but the puppet of Lambda Warhead, took a swig of the Maniac Beer and tore through the compound to begin his war against his own nation. Pretty awesome origin story, the posing and camera quality is sick. (How do you get close-ups to look so sharp?)

Warhead and Maniac Beer are obviously Ossum choices too.

Just my iPhone camera and plenty of light

sahasrahla
that is a fantastic question to which no satisfactory answer will be forthcoming
Posts: 766
Joined: Sat Feb 04, 2017 5:40 pm

i just fucking love maniac beer and the lore that's spun off from it, literally one of the best parts of brikwars
Top

Goddamn Die this is golden
Bleak Company! COMING SOON TO A PLANET NEAR YOU!!

Most of my Soaps and Armory posts will be localized to this list
Anno Collection
So go on and give it a look!
Top

Armoury: The Realm of Frostborne , The United Empires of Esduin / The Story So Far: Frostborne Kronicles
Top
Post Reply
7 posts • Page 1 of 1