"This is getting tiring!" For several weeks, the doctor has been checking Sadow's life meters again and again. Even though the vital signs seemed rather stable, not a single trace of brain activity could be found. As he turned around to his patient, linked up to a vast array of medical computers and machines, part of him began to question the Grand Admiral's decision to keep her alive at all cost. To the doctor, the president was nothing more than a mere vegetable at this point, kept alive to uphold the moral of a nation facing yet another crisis in its rather dramatic history. That was pretty much the one big reason why he hasn't pulled the plug yet. During his service, the doctor already had to deal with a few cases of outraged relatives, mourning their loved ones after a failed operation, but he most certainly wasn't ready to face an entire nation's wrath for carelessly killing their beloved leader. Losing his job or credibility as a surgeon wouldn't even be the worst thing for him to happen in that case. 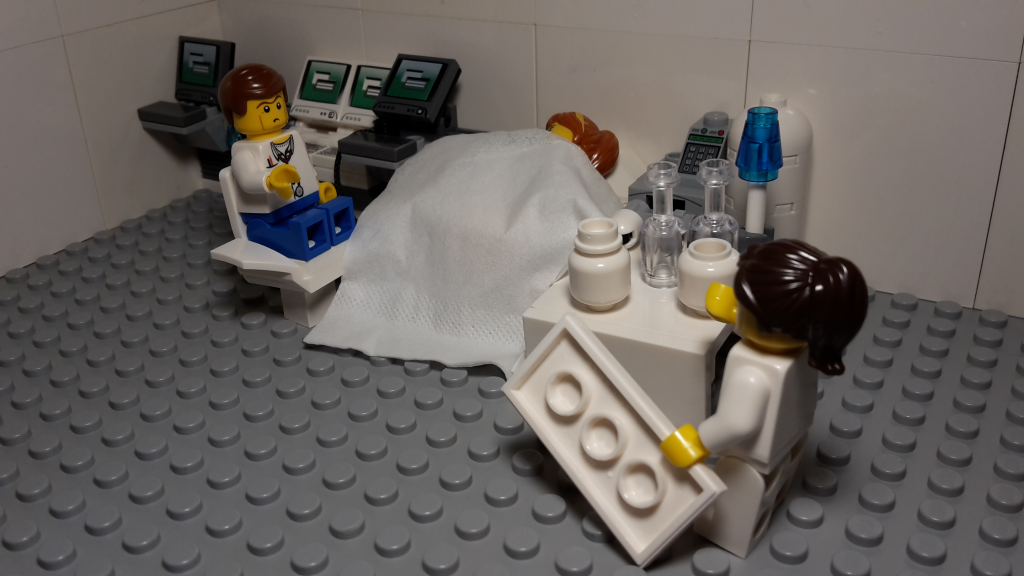 "So, how is it, doc?" The nurse entered Sadow's room to check on the patient by herself. Rubbing his forehead, the doctor merely uttered: "Well, not great I'd say. Test results don't differ from last week, she's still in comatose state and we couldn't confirm any brain activity. If it wasn't for high command, I already would have-" "You're not thinking about...", the nurse gasped, "about shutting of life support, do you?" "I don't know...", the doctor sighed, "At this rate, I would declare her as brain dead, but good luck making that clear to high command!" The nurse couldn't quite parse, what the doc just said: "Listen doc, are you even remotely aware of the consequences of letting her die in this state?" "What CAN we even do at this point?! She's a goner! No chance she'll wake up from this-" "She was being exposed to unknown outer-dimensional radiation!! We still haven't uncovered the full extent of damage dealt by the vortex blast to her!!", the nurse furiously retorted. Rendered speechless by her sudden outburst, the doctor wasn't sure, how to respond without driving her further mad. Just like high command, she put a lot of faith into the severely weakened president, hoping for her to fix the mess the URP just stuck into. Maybe she did have a point? Maybe the doctor should have considered the possibility, that Sadow's mind ended up being clouded by the impact of the blast, thus unreadable for ordinary medical equipment? "Alright", he relented, "I will look into getting aid from physicists to examine the president's brain for outer-dimensional residue. Until then, proceed with your work as usual." "Thank you, doc.", the nurse was visibly relieved after the doctor finally caved in to not give up on the patient yet. "We're counting on you, Ms. President!", she thought to herself, as she left the room to resume her work. 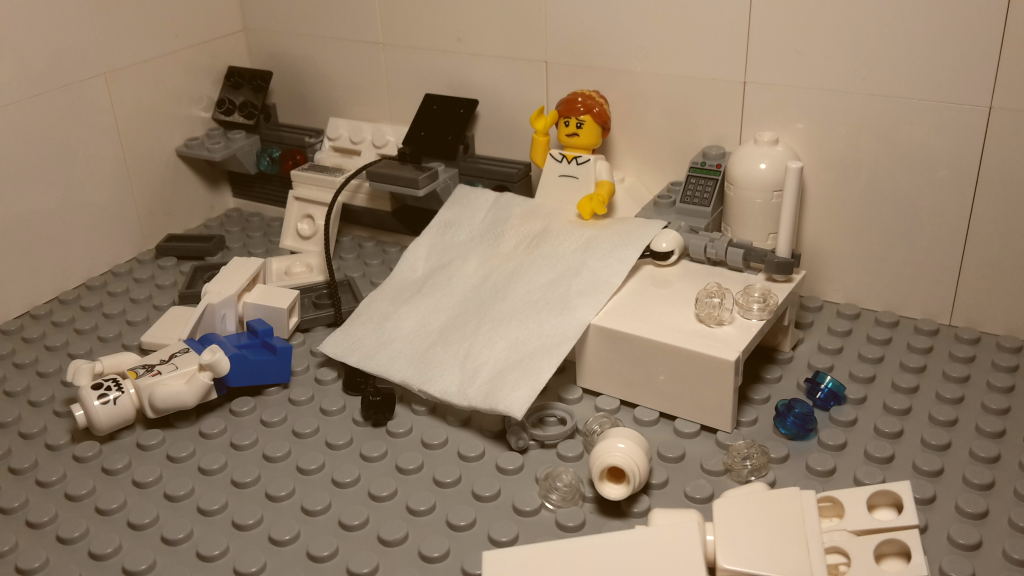 After what felt like an eternity, Sadow finally seemed to regain her consciousness. Slowly she began to open her eyes and rose from her bed. However, the president wasn't able to grasp what she laid her eyes upon: "What happened in here...?" Her entire room looked like it was devastated by a distant yet forceful detonation. Every piece of machinery has been rendered unusable and shards of splintered glass were laying spread across the floor, next to a couple of skeletons in what appeared to be the apparel of the hospital personnel. Even her bedding and patient gown were all torn and withered. Oddly enough, while taking a closer look at her limbs, no wounds, holes or any other indication of needles being attached to her body could be found, which didn't make matters any less strange. How else would she have been able to survive for so long? "What the hell is going on..." After some consideration, Sadow decided to stand up and look through the rest of the hospital for further clues to get a lead on what might have happened. Though instead of any significant clue, all she found were even more run down corridors decorated with the long rotten corpses of staff members. Feelings of helplessness, frustration and fright were further overcoming the usually fearless president, the longer she dug through the ruins of this very hospital. Realizing that staying around here seemed pointless, Sadow headed over to the nearest window to confirm whether the outside world was similarly devastated.

The outside area didn't look any more lively either. A vast deserted megalopolis with a blood-red sky above stood before her. It wasn't the devastation that was shocking her the most but rather the familiarity of the skyline. Could it be...? Yes, it could! After a quick line of thoughts President Sadow began to realize that this deserted city was in fact the capitol district of Nowa Warszawa. "Impossible... How... how could this happen?", she kept asking herself, although she was pretty certain about the circumstances: without being under her watchful eye, it was very likely that internal struggle for power erupted allowing the Soviets or any other aggressor to take advantage of the mess and sweep through the entire nation in a whim. Four years of hard work, trying to keep the nation together and to resist the incoming attacks right after regaining independence, all wasted. Sadow smashed her fist against the next best wall in anger and actually managed to leave a rather sizable dent on it. She was very close to tearing up, even though no amount of tears could remotely signify all the despair and anger that built up inside her. "Beautiful, isn't it? Hehehe...", a freakish and insidious laughter was to hear uncannily close to Sadow's current position. "Who's there?", she quickly turned around only to see something that even her wildest imaginations couldn't have possibly came up with, especially after everything she went through. 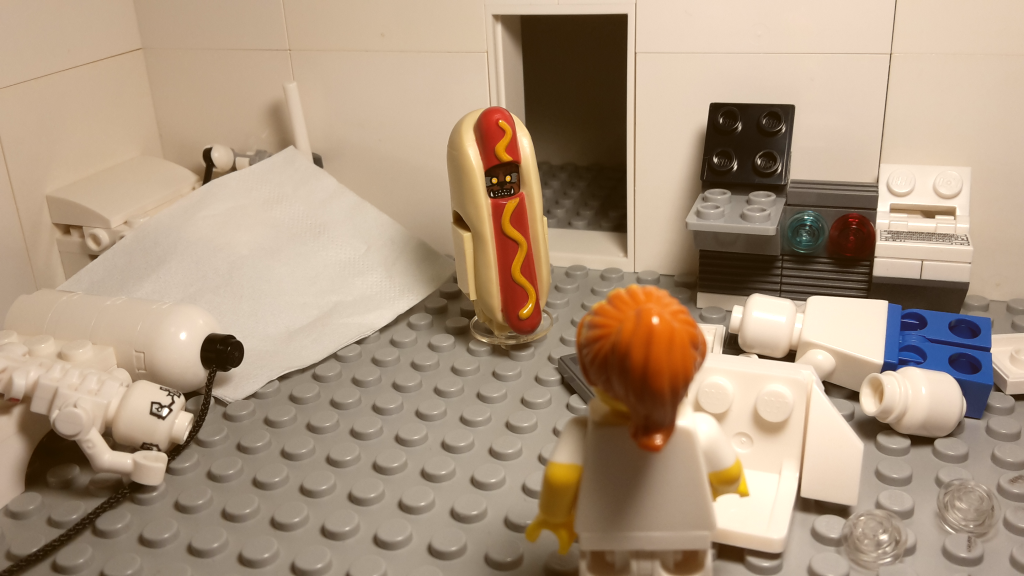 Before her, a soggy and rancid giant hot dog floated just slightly above the ground, with a hideous visage at the upper center popping out of it. "A vast epidemic of violence swept through the entire galaxy, caused by years of peace and stagnation. Nothing got spared! Even the greatest empires broke down in the wake of Ragnablok!", it remarked. Confused and slightly disgusted by the hot dog's appearance, Sadow proceeded to ask: "Ragnablok?! So you were responsible for this mess?!" "No, no!", the hot dog replied: "I was merely overseeing the whole show. Everyone blowing each other away was quite fun to watch, actually." Seeing the anger and confusion further building up inside the president, the giant frankfurter thought that it might be much more fun to mess around with her instead of killing her off right now: "If I were you, I wouldn't worry to much about it. Neither you nor anybody could have averted Ragnablok. At the very least you can enjoy this stunning skyline!" That did it! Not standing for this mockery, Sadow focused her entire wrath into one forceful punch and lunged for the giant sausage. 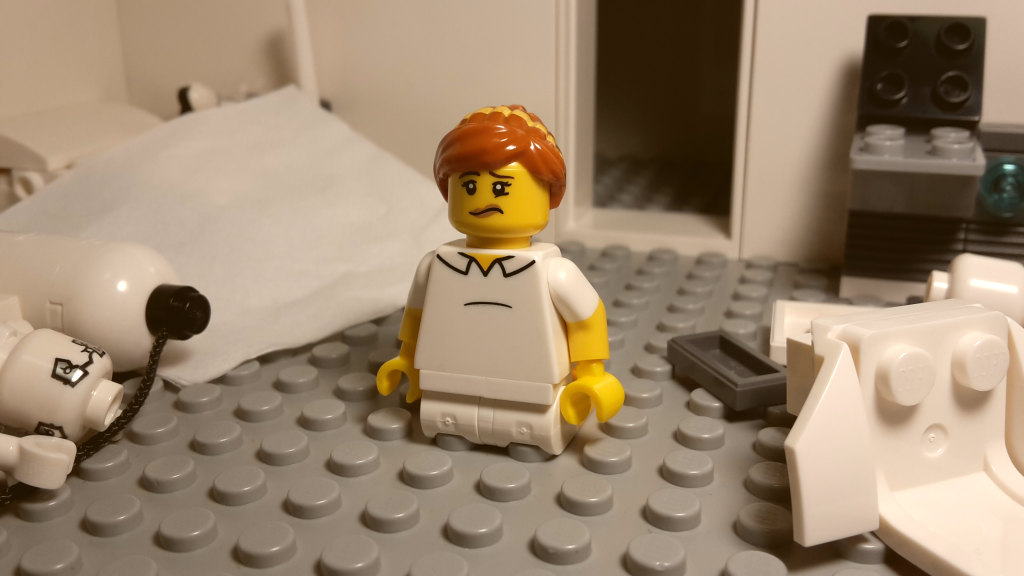 However, the floating hot dog quickly burnt down and evaporated without a single trace before her fist could hit it. "AHAHAHA", there she heard it again, the freakish laughter. This time from a greater distances but not any less frightening than the last one. "Just what should I do?" Sadow sunk down to the floor, kneeling. Is there any wait out of this hellhole? Did she really see all her efforts run down in an instant? Or was it merely a cruel nightmare spawned by her biggest fears?

This was by far the most interesting story I read, and makes me want to know more. Not only did you include visuals to further set the scene, but you were able to perfectly establish what was going on with little to no prior knowledge of your universe. This absolutely deserves a perfect score, and I anxiously await more I love how you used the recommended listening and pics to enhance the reading experience, this was really a treat. However, I'm really hoping to see a future soap that expands on what happened in this brikfic.
Concept & Theme - 8
Form - 9
Voice - 10
Style - 17

When the Brootalz gonna invade URP?

Definitely agree with DayBoost here, highly anticipating the next chapter of this!

Actually, the entire Purple Sector storyline is as good as wrapped up. Just need to get around writing the epilogue.