Building a SHIP, in need of guidance.

Building a SHIP, in need of guidance.

So, it's friday, my roommate is out of town, and I have absolutely nothing to do. I decided that instead of sleeping out of boredom, actually doing homework, or reading, I would build a SHIP. I recently put together a crew of space raiders with the idea that the Speiss Vikings I had went off into the cosmos to explore, but met with a frightening Space Raider Lord who, alongside his crew, killed the viking king, as well as most of the other vikings. Instead of introducing them as just the figs, I thought a SHIP might be appropriate. I also recently dismantled my old

ship, so I have almost my entire reserve of parts at my disposal.

So, my poker table is set up in my room, ready for the build. My three containers of LEGO are arranged around my chair on the one side, and I'm ready to get at it...

Err...but I'm not entirely sure what to go for, which is where I'd like some tips.

I've always liked stuff with outrigged sections like the Galactica: 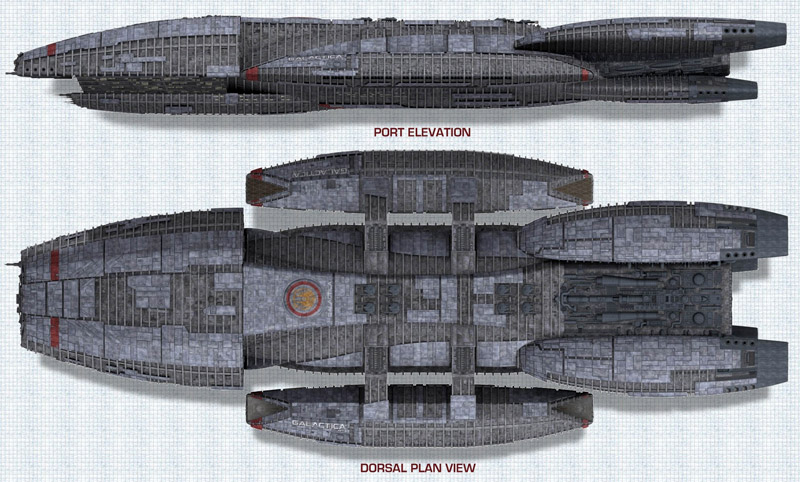 But I'm not sure if it's appropriate. I also have the basic frame from the newer Viking Longboat set at my disposal: 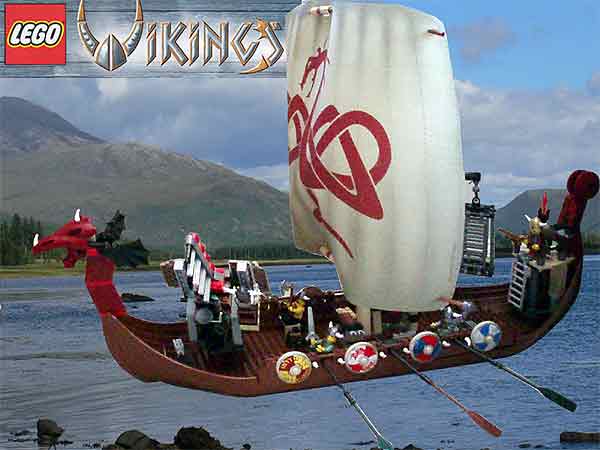 So, that's another option.

Any ideas/inspiration to share with me, Brikwarriors? I pretty much want a brigand's mobile home, I guess somewhat similar to the way the Serenity functioned for her crew in Firefly, except, of course, it needs guns. Living quarters, bridge, maybe a common room to gamble in, a good cargo hold, possibly some smaller scout ships fitted into it.

Have the living quarters built the same way, but put in small details based on who is living there.
This sig is too fucking large: show anyway

The best way to make it look like a Viking ship is to give it the huge bow from the boat. Make it armoured, but keep the shape. Maybe take some inspiration from the dragon head and make a turret on top. For the back, put some huge freaking engines on it, but make another upward slope in between them. I don't know how to explain it very well in text, but pretty much just mimic the shape of the centre line of the boat piece.

Alternatively, you could use the boat piece on both the bow and stern, and use smaller engines positioned where the oars would be.

One other thing you could do is drape the sail over the top of the ship. This will be good for multiple reasons:
1) It will really help get the Viking vibe across.
2) It will help save on bricks. Just make a frame over which to fit it, and it will be stable enough. Just make sure it's pulled tight to keep it from looking like fabric.
3) It will make it much easier to access the interior. all you have to do is detach one end, and then fold it out of the way.

TL;DR make sure to keep it looking like a Viking ship, but in space.

You might want to grab some of those emergency space blankets and make a sail of them- solar sails are a real thing that could reasonably belong on a ship, and mylar is sufficiently shiny and space-y. Even better if you get the gold ones, not the silver.

make sure that you have a strong base to work off of. otherwise it will beak if you pick it up. This is most frequently accomplished with technik.
Top

I applaud your project! I've thought about a ship of my own for a long time but I'm separated from my bricks until june next year... though I'd really like some wip shots of your ship.


piltogg wrote:make sure that you have a strong base to work off of. otherwise it will beak if you pick it up. This is most frequently accomplished with technik.

Check out this guy on mocpages http://www.mocpages.com/moc.php/339305 where there's some nice pics of a technic frame. I think you could get away without having solid sides, maybe tecnic and plates but otherwise something like that...
Halcyon Empire Marines * Halcyon Empire Arts & Culture
Crocs
Top
Post Reply
6 posts • Page 1 of 1