Hope this meets with everyone's approval for Wiki-ising. Enjoy!

The Elite Old Guard of the Iceworld Krysto. They have survived hundreds of battles and through their awesome deeds earned the right to carry one of the Iceworld OTC's and command the respect and loyalty of those they lead.

The Elite Housecarls of the Iceworld Krysto. Only the most trusted and Heroic are given the honour to serve their Warchief as a Housecarl.
They give up their OTC for a weapon of the ancients passed down from the War with the Robotic Ice Daemons, of which the Blokbots are but a pale shadow of their former roots. These weapons are Daemonic Ice Blades won from some of the most deadly Robot Ice Daemons ever faced. The Daemonic souls of the blades owner is still bound in the blade and they thirst for the heat of all living things.

The Middle Guard of the Iceworld Krysto. They are armed with Heavy Laser Carbines with under Barrel OTC's. These troops fight on the line and never give, never wave and never tire. Their excellence in combat is a thing of Dark Renown across the Brikverse and they have earned many victories in battle.

The Young Guard of Iceworld Krysto. These Iceworlders have shown their metal in combat but still have much to learn having not yet earned the vaunted honour of their own OTC they have constructed their own Ice Crystal Chainsaws and their impetuous hunger for close combat makes them excellent assault troops, where they can excel and show their elders just how fuckin' hard they are.

Some of the Young Guard end up pissing off their betters, wither it's pissing in the Warchiefs Ale or smoking his Pot or even Knocking up one of his many slutty daughters it doesn't matter. The punishment is always the same. Normally Iceworlders despise the use of far ranging weapons and prefer the heady excitement of close combat. Imagine the punishment for a young hothead when he's given Heavy Weapons Duty... still, discipline plays a part in the Iceworlder psyche and if he ever wants to be allowed to fight hand to hand ever again then he better get the job done. This Young Offender is armed with the OTR(MkII) Rocket Launcher.

The Warchief Enigma Shroud... (Stubby head lol, but I have two).


IVhorseman wrote:
Enigma shrouds the leader of Ice World, who had disappeared from the original Ice World expedition. His name has been lost in the winds of time, and still he wanders the ruins of the Ice World Research station, perched upon a ruined and crater-marked glacier, slowly encroaching upon it's enemies. Much like a glacier, he travels slowly yet unstoppably towards his opponents. Armed with a suit of wintry powered armour and the Original OTC, he attacks with the ferocity and intensity of a winter blizzard.

looks-wise, I'm imagining it have the old-dude head that came on all the original iceworlders, but with a white aquanauts helmet/armour thing on his head, and of course the orange antennaed visor. As for the power armor, just add some bits to the aquanaut helmet base, since it has attachment points on it for extra parts, and as long as it looks beefy and heavy it's good. The Original OTC should look as old-school as possible. I guess a missile launcher or five wouldn't hurt as well... and machine guns... I guess just lots of guns.

The OT Mega-Heat Cannon: The OT ABS chambers spin as plasma is pumped through, the OT ABS enhances the energy a thousand fold creating super-plasma which is then stored in the main OT Chamber until it is full. At which time a searing line of super-energy is expelled disintegrating anything in it's path. The range however is negligible as the beam quickly loses it's energy. Still this weapon can melt through anything... Any-Thing! 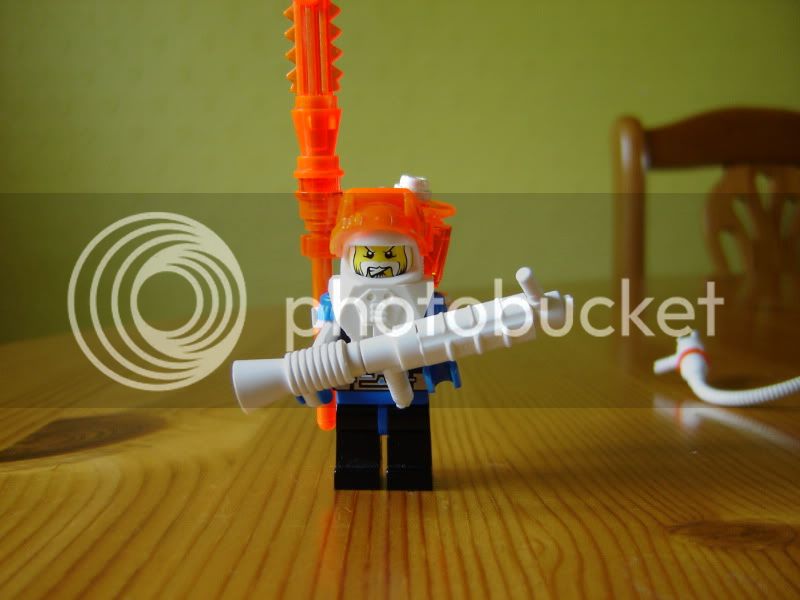 The Ion Hand Cannon: Another monster weapon which fires a blast of diffused Ionised OT particles at an enemy causing explosions. It's not particularly good at defeating armoured targets but handy none the less. 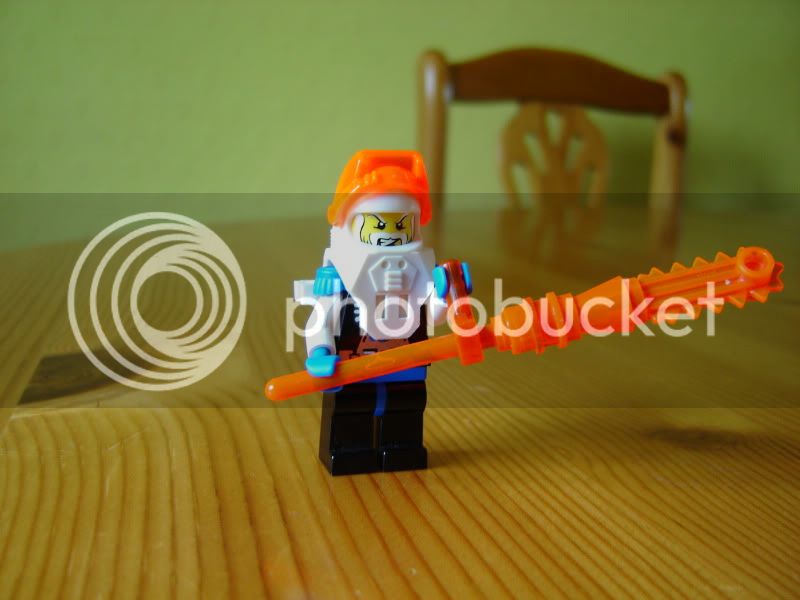 The OTC Evisorator, grown purely from OT ABS this weapon will never break and can never be parried. You may be forgiven for thinking this to be the Original OTC, one of the Nine Artefacts of Creation but you'd be wrong...

And now lady and gentlemen you are about to be allowed a glimpse of one of the Iceworlders most inner sanctums never before seen by non-Iceworld eyes. The Ice Caves of Creation...

The monument is made from the bones and teeth of the Daemonic Ice Dragons of the Old Times that the Robotic Ice Daemons rode to war.

Proudly the Iceworlders stand in salute as their Warchief passes.

Enigma's face takes on a look of reverence as he approaches the Shrine.

The Gene-Scan confirms his DNA print and unlocks the indestructible OT Stasis Chamber.

As the door opens Enigma stands to the side.

Reaching inside his hand carefully closes around the grip of a weapon.

The Original OTC... looks nothing special, but it's THE Original OTC as created by the Gods and given to the First Iceworlder to aid them in the War with the Robotic Daemons. It's Ossum needs no frippery, no additions and no modification. IT JUST IS!

Enigma raises high the Artefact of Creation and the Iceworlders seeing the holiest of holy relics go wild roaring their lust for battle!

Only in times of greatest need is the Original OTC ever taken from it's resting place, and a war unlike any other is coming...
Last edited by Warhead on Tue Jun 01, 2010 3:41 pm, edited 1 time in total.

With so much ot-technology they're bound to be one of the strongest (infantry) forces around. The first two guys made me think of Stadler and Waldorf for some reason.
Westeron Restored (Fantasy BrikWars)
My Twitch - My blog
Top

Blashyrk!
If you're not into Metal you are not my friend!
Top

These guys are WIN! I never thought Iceworlders were so awesome, well, I guess they had to be, owners of the ORIGINAL OTC and all
beautiful work Warhead

Great faction! Clear colors, true to the original scheme but still lots of modded weapons (lots, and well done). I like them

Cheers Ross, I owe you one. To be redeemed at an unspecified time.

Ross blinks at the screen, a slow smile spreading across his face. He mutters, under his breath, "Yes... this should be interesting..."
Last edited by Ross_Varn on Tue Jun 01, 2010 3:57 pm, edited 1 time in total.
Top

I was thinking a pint, I have no idea what you were thinking about...

Thanks, as to the RPG, you should do, it looks not unlike the one you've done for your own Sig-Fig, lol!

Is this from Fall of Fico as well? Are you still taking faction nominations?
[21:30:33] Scritch: you can put it in theblackdog

This is just WIKI padding for a Badass faction and yes, there is no time limit set for nominations or whatever for the Immortal War but we do need members willing to stand against the Immortals and their allies. If it helps, Immortals plan on seizing everyone's Beer for themselves. The bastards.