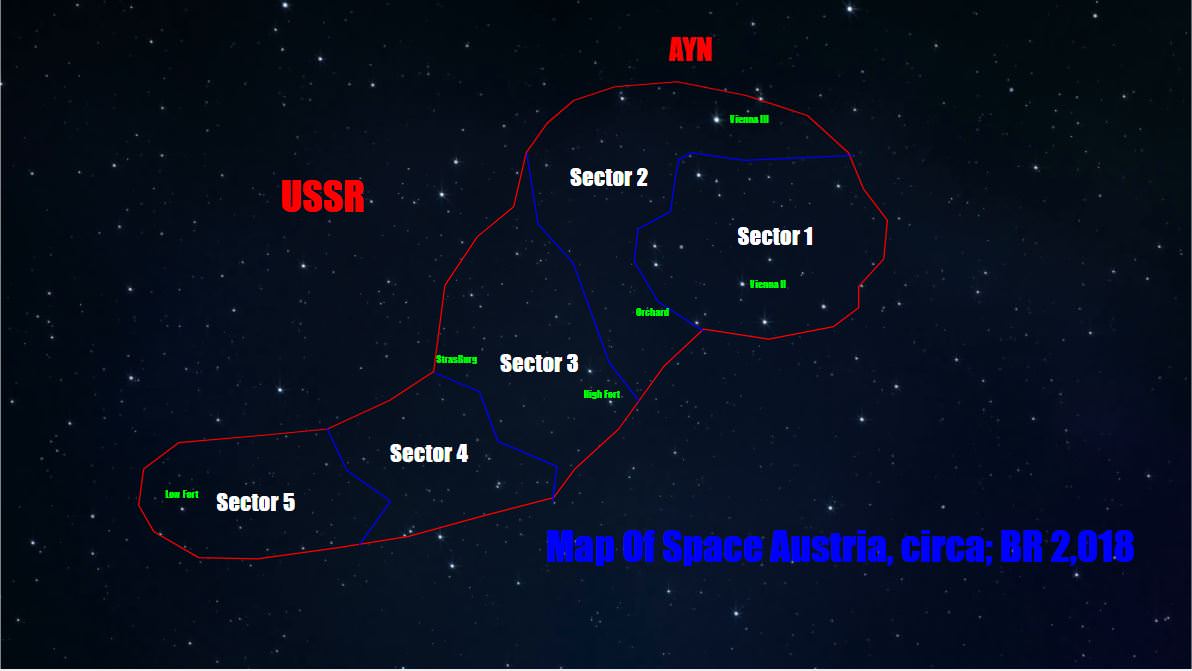 The Empire of Space Austria is broken up into 5 sectors, or "Star districts" as they are better known,they are as follows:

Sector 1: This area is known for its sumptuous wealth and power, it is the home of Vienna II, which serves as the primary shipyard for the SA's navy, as well as the planet known as Vienna I, the location of which is left undisclosed. Visitors describe Vienna I as a place of immense beauty, with great highways connecting compact cities of skyscrapers and endless seas of grass. Vienna I serves as the head of the SA's government, and the location of many of its greatest minds, as well as being a sanctuary for high ranking political refugees. Vienna I also serves as the location of the SA's R&D headquarters. Vienna I is home to around 100 million minifigs, nearly all of them employees of the state, and although only around 5% of the planet's surface is populated, 97% of the people there live in the densely populated cities.
Sector 1 also serves as the Empire's financial hub, however all of the large businesses in sector 1, including the rapidly growing South Roman Financial institution are enterprises of the state. Privately run businesses however, are found in the poorer sectors.

Sector 2: Sector 2 serves as the center of the SA military, including the Capitol and home of the Imperial palace. (Sprawling residence of the imperial couple); Orchard. Sector 2 is also home to the planet Vienna III, which is one of the more exposed planets in the SA domain, having near Autonomy in the region, Vienna III has its own military and parliament, however it is still very much a part of the SA's Empire.
Sector 2 is the most sparsely populated Sector in the empire.

Sector 3: The most populous sector in the empire, also home to the largest number of Non-peach citizens. Sector 3 is also the location of High Fort, one of two military bastions, in which survivors of a cataclysmic event could seek shelter, both forts have enough resources and a large enough garrison to withstand a constant assault from a Tek 6 or lower civilization almost indefinitely, they are considered impregnable to anything but black hole missiles. Sector 3 is also the location of plane StraussBurg, a massive city planet, which has seen decades of cultural mixing, as it is heavily populated by immigrants from the USSSR, whose culture can be prominently seen there.

Sector 4: Often referred 2 as the "Crisis Sector" Sector 4 has primarily become a sanctuary for peach immigrants seeking a safe haven from oppression elsewhere in the Galaxy. The government is currently trying to increase its presence in sector 4, however current Burgomaster Stephen Katz argues that the flow of immigrants should be stopped. Although Katz has support from many of the predominantly Yellow systems, he has found little favor in the upper levels of government.

Sector 5: sector 5 is the most heavily militarized sector of the Empire, as there is a constant fear of Galacian or Soviet attack. Nearly every planet there has some form of military outpost or garrison. Although nearly all citizens of the Empire live a fairly standard Upper middle class lifestyle, with advanced Tek and medicine, poverty is most Acutely felt in Sector 5, ans much of the infrastructure, often left over from Soviet occupation is damaged or in disrepair, and the Government's welfare, which provides the primary source of income for non government personnel* has been less effective there. The current establishment looks to improve conditions in Sector 5, however, until the Galacian threat is culled, that is unlikely to change.
Sector 5 is also the home of the other Military Bastion, Low Fort, which serves as a sister to High fort, as well as a refuge in the event of an attack from the Galacians or Soviet powers.

*(All Soldiers, Sector 1 workers, Mediks, Government officials, and scientists are considered to be government personnel.)