It is the end of Ragnablok. The Nehellenium brikverse shatters, swirls, and collapses in on itself. Some escape unscathed. Some are sucked into the Nexus, never to be seen again. Some emerge, forever changed by the apokalyptic energies running rampant. At the center of the Nexus, Blue Guy fights eternally against the Four Horsemen, ensuring they cannot escape to wreak anti-havoc on the Brikverse again. As the Brikverse prepares for its long overdue Rekonstruction, its inhabitants prepare knowing only one truth: nothing will ever be the same.

With the completion of the Battle of the Konvergence, Ragnablok is officially over.

I hope everyone really enjoyed this year of Ragnablok. It was an honor to get to organize it, and then to collaborate with many of you on the story. I know things weren't always perfect but I think I've grown as a collaborator and creator thanks to everyone involved. This was a true community event, the likes of which we may never see again. There was so much content that it feels like we've been Ragnablokking for much more than a year. The Battle of the Buttnomikon was only a year ago! It was awesome to work with you, particularly RedRover, theblackdog, Falk, Kommander Ken, and Bookwyrm, to flesh out the story into an epic, meta, satisfying ending to the old brikverse. Some of the stuff that came out of Ragnablok, like Scribonius's Menagerie stories, and Duerer's end to the Poland storyline, are masterworks of kanon. And the new realms that have opened up already, Monolyth and Anno, are ossum already. The future is ripe with opportunity.

I'm glad this event got to end in an IRL brikwar. That was really the best way to end this once-in-a-lifetime story. Thanks to aoffan23, Bookwyrm, Kommander Ken, Stubby, Silasw, and "Rolette" for coming out to play! You are all amazing ambassadors for Brikwars, as our new friend The Kid can attest to. We got to introduce many people to Brikwars, had so much fun, and, I hope, inspired much more IRL brikwarring in the future. I'm looking forward to playing some of you again soon!

All that being said, I should probably announce that I will go on hiatus for a couple months to recharge the brain juice. Just a couple loose ends to clean up and then it's time to focus on other projects. (cough SRG: The Comic cough) I can be reached via discord PM but I will probably be muting the server and logging off the forum while I try to remember how regular people live life.

Try not to be too interesting while I'm gone.
I make apocalypses and apocalypse accessories.

No, thank you, for helping to organize and run the event and making it happen in the first place, (and also the kickass poster, it is amazing and will proudly hang on my wall) I know I probably would still be isolated to my small narrative corner of the universe and wouldn’t have become as involved in the bigger Brikwars community/kontinuity had you not decided to initiate Ragnablok over a year ago. You’ve facilitated some of the most epic content the forums have seen in years, and for that the community owes you a great debt of gratitude. Take a much deserved break, the rest of us will hold down the fort while you are gone, and we look forward to seeing what new stuff is in store when you return!

Also, if you wish, I can look into updating the Ragnablok wiki page in your absence so that you can focus on other stuff. Looking forward to seeing more SRG and other content, and I expect to see something cool done with the Singularitatem a few months down the line when you return to us

Bookwyrm wrote: ↑
Mon Nov 04, 2019 2:41 pm
Also, if you wish, I can look into updating the Ragnablok wiki page in your absence so that you can focus on other stuff. Looking forward to seeing more SRG and other content, and I expect to see something cool done with the Singularitatem a few months down the line when you return to us

I know Red and Duerer both have some stuff in the pipeline to be retkonned in.
I make apocalypses and apocalypse accessories.

Oh, i definitely have stuff in my pipeline. 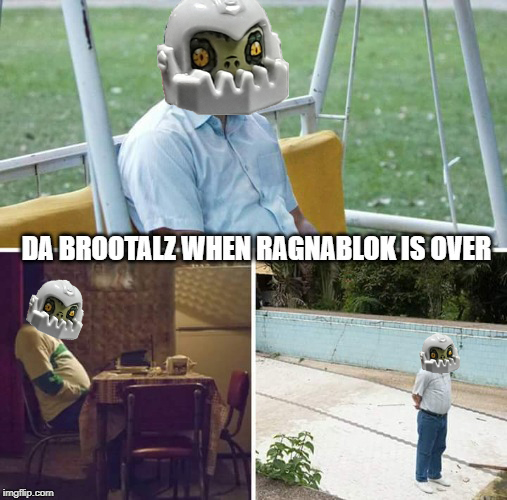 This was nothing short of incredible from start to finish. Thanks to Ninja_Bait for coming up with this brilliant idea, and to everyone who worked to make it a reality.
[21:30:33] Scritch: you can put it in theblackdog