WELCOME TO ONE FOR ALL!!!

This battle will have 6 teams:

OBJECTIVES
Objectives are another side mission for each faction. The faction which completes the most wins!

I`ll take a spot! Minaglacia, if possible.
Compendium of my works 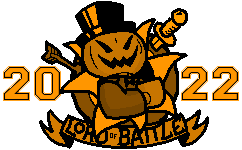 Thanks for signing up! ComradeGreen and Spectral signed up over discord so only one space left!
Soaps and Armoury posts

All spots taken! Orders in please!
Soaps and Armoury posts

Note to bisbeedog: As I'll be gone for a bit, and I didn't get orders from you, I took the Diabolics for the turn

All the troops fall down prone, preparing to defend there AT AT

There leader, Agent Broom, makes a leap onto the top of the AT AT

Upon arrival, the defenders show that they do not appreciate company and shoot her off. This deals 1 HP of damage to her.
[FEAT FAILED]

The other troops attempt to shoot them, but there tactics have hidden them from view. Damn defenders!

One of the troops realizes that his lunch, a carrot, may attract the infamous Space Bunny.

From under the AT AT, Space Bunny appears!

The troops attend to the immediate threat: The Diabolics. All of there guns blaze in flame at them...

... And successfully kill two troops and reduce the hero to 1 HP!

Continuing this reign of glory, Moria jumps onto the drop ship and runs towards the mech

In a moment of pure luck, Moria manages to kill the pilot of the mech...

...And take it over for herself!
[FEAT AMAZING SUCCESS]

With the help of Giles, the troops clamber onto the AT AT.

Even with the over whelming majority, they only kill one of the defenders

Another troops looks inside a treasure chest and finds... an ornate hat?

In response to the loss, the remaining troop and hero hide behind the wrecked ship.

The troop shoots some containers and the explode in a chain reaction!

The damage kills 3 of the Legotovian and hooded crusaders troop's.

Just need orders from Bisbeedog, then turn 2 will be out!
Soaps and Armoury posts

Minaglacia shoots down the remaining regulars of the Defenders, but the hero just manages to survive.

After the success of the CoRE regular, Giles pulls out a hologram of a giant carrot.

The remaining regular puts the hat on, and it gives him a D10 skill die!

With the new found mech, Moria blasts a missile at the hero...

The other troops kill the last of the diabolic!

Agent Broom decides to start making fun of the defenders to lure them down.

All the regulars start kicking the AT AT to help Agent Broom with her feat.

Now enraged with anger (even if he looks happy), he slides down the tarp to Agent Broom...

...And falls off, taking 1HP of damage
[FEAT SUCCESS]

The troops attempt to shoot Minaglacia. They all miss, and the 2 jetpack troopers throw their guns by accident.

The speeder flies along the leg of the AT AT...

... And does an overpowering shot at Minaglacia, killing 2 of their regulars

The hero attempts to kill the helmeted troop, but completely fails.

A mech slams to the ground.

And with the mechs, 5 regulars and a hero accompany it. It's the defenders reinforcements!

The troops back up to the crashed transport, readying actions.

The hero once again attempts to kill man with nice hat, but fails.

The speeder and troops deal another 1hp of damage, leaving Giles on 1hp!

The troops attempt to kill the Defender's hero but fail. In response, the hero stabs her broom into the officer killing him.

The mech fires a thunderous bolt through the hero, killing her in one shot!

The helmeted troop deals 1hp of damage to the Spectral's hero.

In an act of desperation, Giles manages to form some sort of peace treaty with the defenders, causing them unable to harm Minaglacia until Minaglacia harms them.

Orders in for Sunday please!
Soaps and Armoury posts

The rest of the agents attempt to attack the mech and deal 1HP of damage.

The spectral's speeder shoots down Giles! He a dead boi.

The rest of Minaglacia is shot down by the regulars.

With their mightiness, the defender's troops destroy the final CoRE members (Except one)

The hero, Lord Regan, swiftly flies over the speeder driver, and cuts him in half.

The missiles manage to kill one troop

It's a draw between Lordintype and Spectral!
Personally I wanted MadMario to win...
Soaps and Armoury posts

GG, nice work Spectral, and everyone else.
Iran will be the world's Luke Skywalker

I enjoyed the usage of the downed AT-AT as scenery.
Fantasy battles - Scifi battles