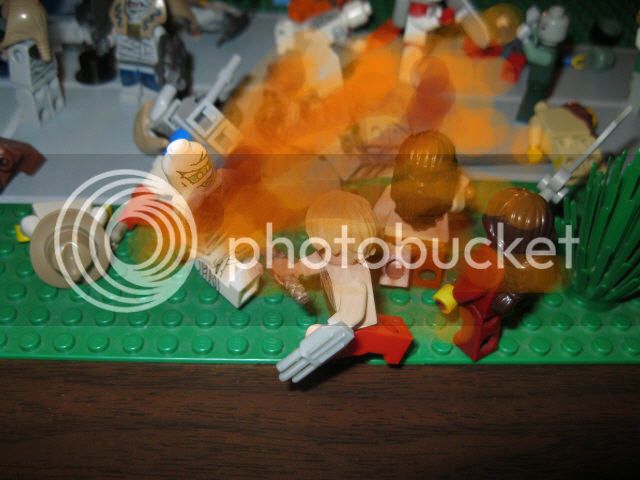 One of the glowing green mummies charges the killer hos. One of the hos swings her sword and cuts him in half, but it's no use. The reason that he was glowing green was because he absorbed extra radiation. The mummy blows himself up in a suicide attack, killing all three killer hos.

A mummy strikes Major Patriotism, but doesn't kill him.

Patriotism tries to counter by bashing the mummy with his shield, but is equally unsuccessful in beating the armor role.

Another mummy swings at Patriotsim, but misses.

Mummhotep is able to raise up the other glowing mummy.

One looter puts the globe on his head.

He then gets on the stage and tries to become a youtube sensation. The audience doesn't seem to pay much attention though, probably because more than half of them are either dead or blind.

This looter tries to shoot Jenkins, but Jenkins is able to turn the gun so the looter shoots himself in the face (critfail). A lucky armor role saves him.

He swings his bat, but doesn't do enough damage to kill Jenkins.

Jenkins counter by firing his shotgun into the looters chest, which almost kills him, but not quite.

The other looters run into the crowd and try to blend in.

Except for Guy Fox, who begins to sing, "Remember, remember, the 5th of November The Gunpowder Treason and plot; I see of no reason why Gunpowder
Treason Should ever be forgot."

He aims his stinger at the bar, revealing that most of the kegs actually contain gunpowder instead of beer.

The bar explodes, killing the two guys drinking the beer.

One of the leaders of the corrupted spacemen jumps down and charges forward. He swings his corrupted nova sword, cutting through man and man dressed as ape alike. He doesn't succeed in corrupting anyone though.

The other leader fires on the Aztek in the tree, but doesn't kill him. He's also unsuccessful in corrupting him.

The others move and set up response fire.

This one fires on Major Patriotism, but doesn't kill him.

The fighter launches and fires a pair of rockets at Santa's sleigh, which destroys it. The sleigh crashes on the roof while the engines plow through the entrance to the Aztek temple and into the survivalists jeep, totaling it. Santa bails and the elves are able to use their balance and agility to land safely.

Jenkins tries to fire on the looter, but critfails and trips instead, dropping his shotgun in the process.

The then attempts to throw a combat knife into the looter's throat, but critfails again and cuts his hand. He doesn't get injured however.

This guy finally burns out.

Psy attempts to prove that he is Segata Sanshiro, Kung Fu legend and disciple of the Sega Saturn. He tries to preach the sega saturn by punching John Woo's heart out. He critfails however, and only succeeds in getting pistol whipped by John Woo (-2hp).

The eagle warrior tries to attack HMG, but misses.

HMG is equally unsuccessful at killing the eagle warrior.

The warrior elite tries to attack a civilian, but only gets his sword stuck in a column. He will now have to pull it out.

The civilian attacks the elite, but doesn't kill him.

The hunter in the tree tries to turn and shoot the corrupted spacemen, but falls out of the tree instead. He's ok though.

Another hunter shoots a corrupted spaceman in the face. His lightening reflexes protect him from the spaceman's response fire.

Briktezuma is able to draw in all of the blood within 4" of the altar, and calls on the god Xaman Ek to appear.

Faction Unlocked- Xaman Ek
Xaman Ek is a pretty benevolent god who helps and guides others.

Quetzalcoatl on the other hand...
Faction Unlocked-Quetzalcoatl
Quetzalcoatl has returned, and is out to destroy the world!

The Azteks realize they might need some more help, and bring in a mech. 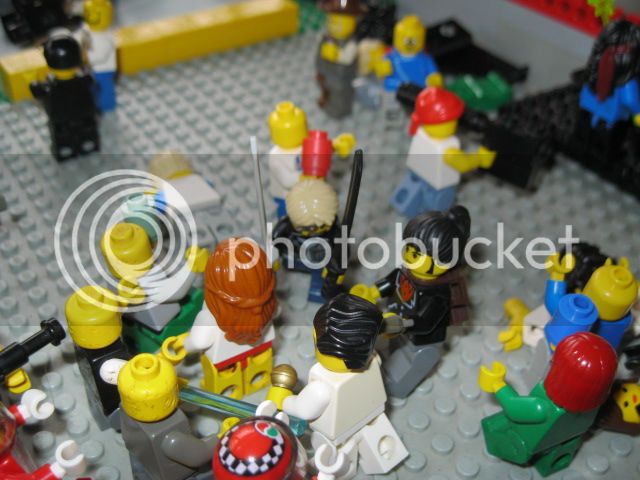 The exterminator draws the swords from John Woo's back and attempts to kill Psy. Psy is saved by a redshirt.

Kevin attempts to use his shotgun to break off bricks to throw.

This just breaks his shotgun though.

The civilians try to kill the warrior elite. One misses and the other two can't beat his armor roll.

HMG throws his laser spear at the glowing mummy, who explodes and kills two zombies.

He then tries to attack an Aztek, but slips and falls on the life preserver. The Aztek counterattacks, but doesn't kill him.

One surfer surfs over Quetzalcoatl.

Another surfs over the dead surfer.

The gunner shoots a looter.

The tank drives over the looters' car and fires a grenade, killing a zombie and further wounding Buzz Saw (-1hp).

The Most Interesting Man in the World- Alex

The Dos Briquis guy tries to kill the guy with the globe on his head, but can't beat the armor role.

He picks him up and throws him like a bowling ball into the crowd (He bowls overhand). This kills a looter and one of the gangnam style fighters. Globehead is fine though. The Dos Briquis guy loses his balance and falls in the process of throwing him.

One of the elves tries to shoot a corrupted spaceman, but is taken out by response fire.

The other elf is more successful.
Top

My bet is that HMG is the last standing - he can't die!

darkpaladin wrote:My bet is that HMG is the last standing - he can't die!

I could see it being officer Jenkins as well. Duel maybe?
My Armies: Knights of Aldasveign, Arcadian Federation, Calvarian Empire
My art thread
Top

MacGearver salvages the important things from the jeep- beer and chicken. The beer is now attached to his helmet, turning it into a giant thirsty hat.

He retrieves his saw and convinces the tennis player to join them.

He dispatches a mummy.

The lifeguard tries to hit the Aztek warrior, but misses.

The tennis player attacks the Aztek, but he manages to survive her OTC strike.

The ex-army survivalist fires on an Aztek, but doesn't do enough damage.

The survivalist marksman tries to hit another with his poison tip blowgun, but misses.

"I"LL SHOW YOU FLAMING HOT!!!" she shouts. She doesn't kill the survivalist leader, but manages to injure one of the cows.

"I don't want to do this, but it's a matter of survival!" he says as he guns her down.

Major Patriotism fires the OT Laser at one of the corrupted spacemen leaders, but doesn't do enough damage.

He then attempts to do a flying tackle into the corrupted spaceman on the roof.

He aims too low and crashes into the wall. He is uninjured by the impact somehow.

Mark Manson attempts to shoot the gunner in the apc's turret.

He somehow manages to shoot the car's engine instead. causing it to explode. The car's hood flies off and hits him (-1hp).

Max Damage busts out of the back of his van and takes out two zombies.

He then fires a stinger missile at the apc. The damage isn't high enough to do anything.

Bill hook fires on Jenkins, who once again proves his toughness/luck by surviving.

Tommy Gunn tries to prove his badass gun slinging skills by attempting to shoot both Jenkins and the looter. Even with low damage on both, he manages to kill the looter. 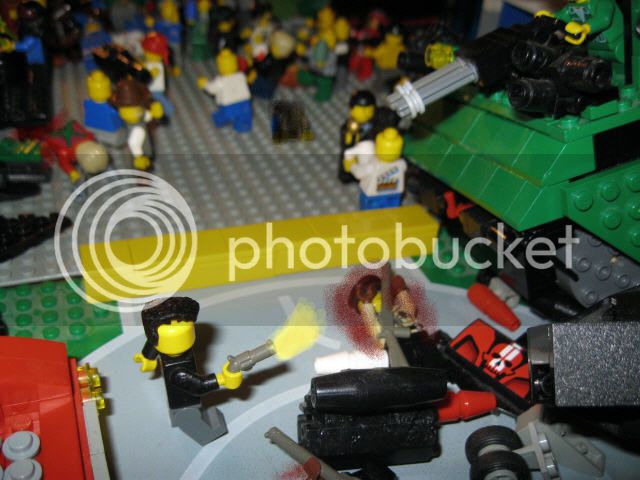 Buzz Saw fires on the apc gunner, but doesn't do enough damage.

He then throws one of the unused rockets from the helicopter wreckage, which takes out not only the turret and gunner, but also one of the apc's grenade launchers.

John Woo tries to kill Psy, but a redshirt gets in the way.

The master jumps up to the top of the archway.

He then jumps off and strikes Quetzalcoatl (-1hp).

"Hey man, could you hold this for me for a second?" he asks. "Sure," globehead replies, totally oblivious to what he is being given.

The dynamite explodes, killing two members of the crowd. Globehead is uninjured.

"Well that plan sure blew up in their faces, hahaha!" the rabbit laughs. "That rabbit's dynamite!" someone shouts.
Faction Unlocked- the Killer Rabbit!
The Killer Rabbit is a demented, sadistic psychopath who is out to cause as much mayhem and destruction as possible!

The following factions are open to play. The first person to send in orders for a faction gets it.
Civilians
U.S. Army
Xaman Ek
Quetzalcoatl
The Killer Rabbit

Orders for turn 5 are due!
Top

I still can't believe that my guy is living through this.
You are faced with door what do you do
I use my flamethrower
wait what you can't do that
Sure I can see
*door catches fire*
Top

darkpaladin wrote:My bet is that HMG is the last standing - he can't die!

I could see it being officer Jenkins as well. Duel maybe?

I would agree, a duel it is

Dibs on Quetzalcoatl! There are so many neat creations in this battle! If things go according to plan, Quetzalcoatl will make things much more interesting.
An army marches on its stomach, and its favorite food is fudge.
Top

Just in case people were wondering, this hasn't died, but because of me going back to college 400 miles away/major remodeling being done in my house so my family can't live there right now, the battle is temporarily on hold though. Turn 5 is mostly done, and the end should hopefully be soon.
Top

I bet it's due to some sort of mushroom. Just my guess.
This sig is too fucking large: show anyway

Yeah, it is. The dishwasher broke, flooding the kitchen and breaking through the basement ceiling. The guys who were responsible for trying to fix this somehow managed to get the house infected with mold.
Top

You are in the right to sue them. I'd be willing to hold your assets if you want.
This sig is too fucking large: show anyway