As Cales consolidates his hold on the Empire, other events happen elsewhere in Medievo. On the edges of the Empire and beyond, for example, impoverished nobles sometimes turn to less savory means of supporting themselves. 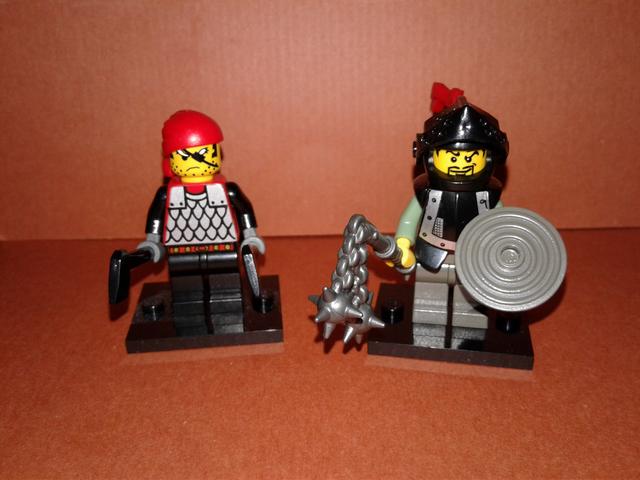 Technically, Yelnek is an Imperial noble, a lesser member of the House of Ravensgeld (Raven's Gold), but he hasn't been to the capital or court in years. It is, in fact, unlikely that he knows of Cales' coup or who is actually in charge of anything outside of his own territory. Like most members of his house, he has little to no influence outside of his own lands, and little money. Stonefield is not a prosperous area. The land suffices for raising sheep or goats, but crops like wheat do poorly in the stony soil. While Lord Yelnek prefers mounted combat, he's no slouch as a foot soldier, preferring to fight with a heavy, double-headed horseman's flail and shield. Next to him stands Elmond Jerghal. Mister Jerghal has worked with the Corbeil lords for several decades in various positions. At the moment, he is Lord Yelnek's bodyguard and aide, advising him on the few decisions it is in the Lord's power to make. When necessary, he fights with paired hand-axes, carrying extra ones to throw at opponents as opportunity reveals itself.

Like many members of his family, he has allied with the local Brigands to help support himself and his household. 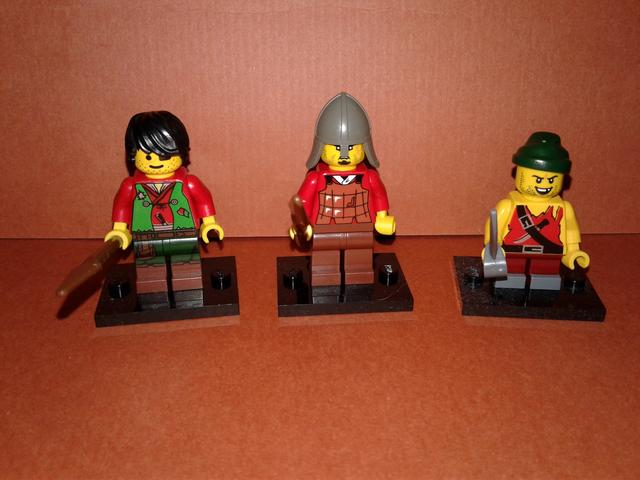 Contrary to popular belief, Brigands, Pirates, Highwaymen, and Bandits are NOT the same thing. Pirates obviously stick to shore or the sea. Highwaymen usually work solo or in small bands. Bandits are perhaps the closest to Brigands, but tend to be disorganized rabble.

Brigands, however, are another story entirely.

The vast majority of Brigands are actually mercenaries of a sort. Often ex-soldiers or peasants who have rebelled against their former masters. They tend to be better equipped than the average group of Bandits, better organized, better trained, and better led. In essence, they are an independent military force, usually allied to nobody but their own purposes. Members of impoverished noble Houses like Ravensgeld will occasionally ally with them and act as minor leaders, but the ultimate command of a group of Brigands is usually with their own officers and NOT those allied minor nobles. Smiley, Gunter, and Three-S (Short Stack Stevens) are three such Brigands often found in the company of Lord Yelnek. They are lower in the ranks, and thus carry basic weaponry and no shields, but honestly, they don't really need shields most of the time.
These Brigands are part of a larger group that have fortified a forested valley several miles from Lord Yelnek's land, controlling one of the local trade routes. They include units of cavalry, spear, archers, and even have access to a few bolt-throwers and the like. As a general rule, they don't harass caravans of traders, but do expect said caravans to pay a toll to pass through their territory. As such, they are fairly well-equipped and fed.

But times are changing. Cales is Emperor now and consolidating his hold on the Empire. Eventually, he may have to deal with the Brigands in one way or another. And it is not unheard of for Brigand groups to take mercenary contracts, pulling the majority of the group away from their camp for weeks on end. Who knows what the future will hold?
Top

Behold, an army of Brigands! Well, the start of one, anyway. 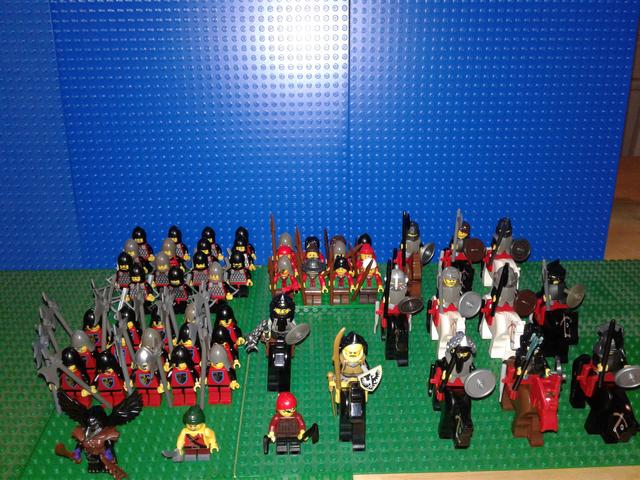 Heavy Infantry, armed with Halberds. Brigands are basically rogue soldiers who band together for support and (sometimes) to hire out as mercenaries. I took the old blue-armed Crossed-Axes torso and swapped the arms for black to fit the color theme. There would have been MORE of them, but I have to fish bits of broken blue arms out of 5 torsos. Don't know why they broke, never had that happen before, but they were secondhand and the arms were oddly discolored. Sun damage, maybe? 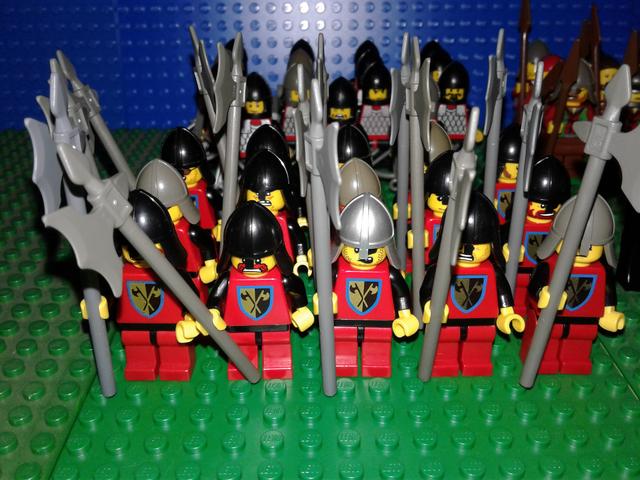 Crossbows. Brigands prefer these to bows in part for ease of use. Bows are faster, but crossbows don't require a ton of training. 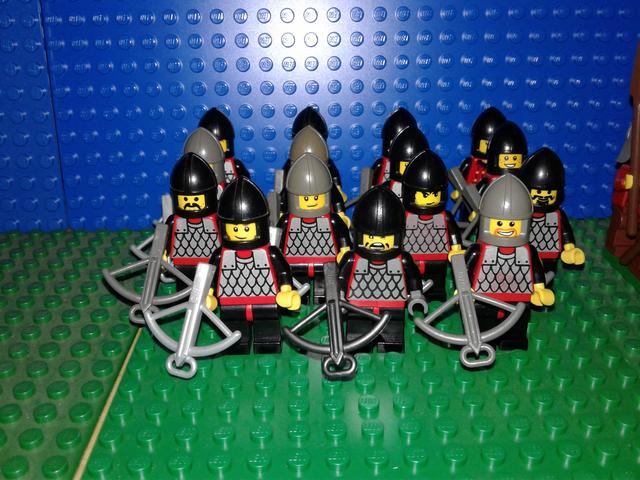 Lower-ranked or newer members of the Brigand army are usually given spears to train with. They're cannon-fodder, but if you can survive being a spearman, you usually make the grade. 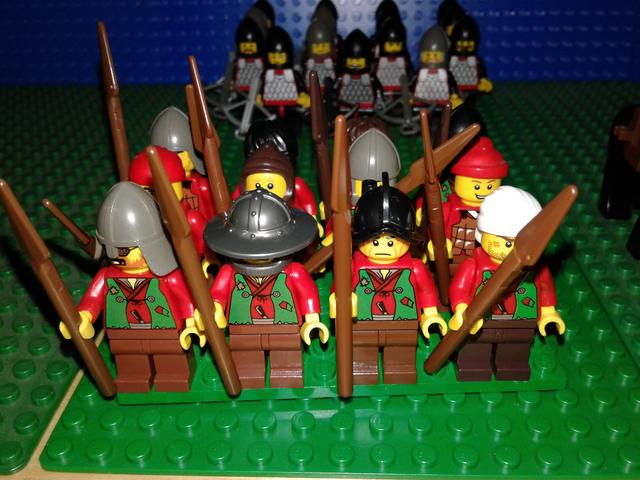 Heavy Horsemen in the Brigand armies don't use lances - they're tricky to store if you want to keep them from warping, and Brigand cavalry needs to be able to keep hitting home. Instead they pair shield and heavy armor with a horseman's axe, and some throwing axes for good measure! Note the differing helmet styles among the unit. Cavalry soldiers usually bring their own horse and armor when they join, and expensive horse-armor tends to be a grab-bag among Brigands. The commander of this unit of Cavalry has a magical Ice Axe, doing frost damage as well as physical damage when it hits. 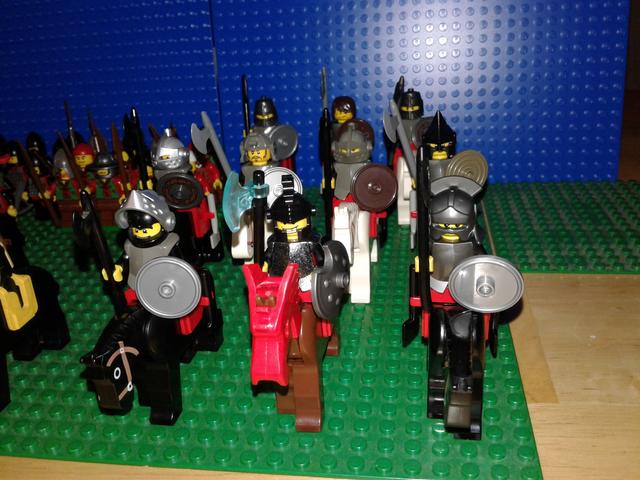 Finally, a smattering of command figures. From right to left we have: Baron Tzindel Ravensgeld (Raven's Gold), current head of House Ravensgeld in the Empire. Unlike some of the cadet members, the Baron DOES know Cales is in charge, but is taking opportunity of the chaos to try and boost his own power and wealth. He doesn't openly side with the Brigands, but everyone suspects he is working with them.
Elmond Jerghal is Lord Yelnek's right-hand man and a master of fighting with paired axes. He's been around longer than most Brigands, and while not one himself, most of the Brigands trust and respect his counsel.
Lord Yelnek Corbeil, Lord of Stonefield, seen here mounted on his trusty steed. As mentioned, he works with the Brigand army to further his own needs. Since none of his neighbors have any more influence than he does, he doesn't care who knows about this association.
Three S in the back (Short Stack Stevens) used to be a pirate, now he's a low-ranking officer in the Brigand army. He still doesn't bother with armor, preferring to run into combat with his saber swinging. Nobody knows how he's survived this long, to be honest.
Finally, on the far left we have Skreeaki, a Ravinki. These enigmatic crow-people have a settlement somewhere near the Brigand encampment, and another somewhere near Baron Tzindel's keep. Nobody knows why they are willing to align with the Baron and House Ravensgeld, but small flocks of them will sometimes join battles on the Baron's side. Skreeaki carries an OT short sword, curved like all those the Ravinki favor, and a net for entangling her foes. She acts as advisor to the Baron, and Scout for her own people, but may have a hidden agenda. There are rumors of a Raven God, like the Bull God of the Bulls... 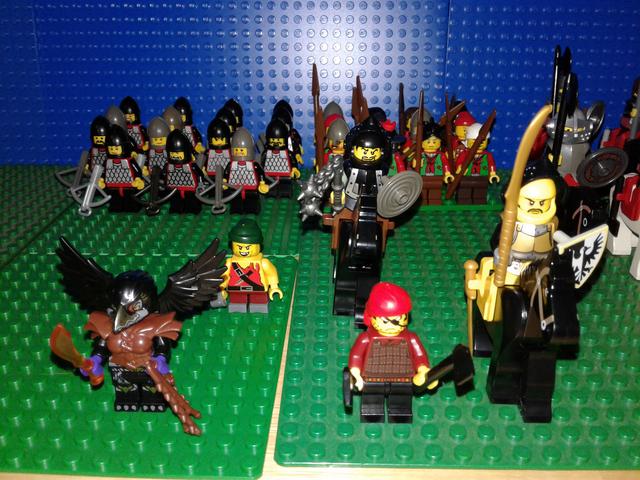 These guys are great

love the ragtag look
I make apocalypses and apocalypse accessories.

I really like these guys. The ragtag appearance of the heavy cavalry makes them somehow more intimidating.
Iran will be the world's Luke Skywalker

sahasrahla
that is a fantastic question to which no satisfactory answer will be forthcoming
Posts: 845
Joined: Sat Feb 04, 2017 5:40 pm

yeah, the motley spear guys are really my favorites of the whole lot
Top

Yeah, I've been looking for a use for those old ninja-brigand torsos for a while now. This fits them nicely.

So I've made 5 more halberdiers, and I have a bunch of random torsos in a similar color-scheme left to use. Any suggestions for what this army needs? I'm toying with some kind of lighter cavalry, armed with horsebows or pistols, maybe a foot unit with paired hand weapons to act as skirmishers or flank guards. Or maybe something truly unusual. I'm already planning some artillery, and I have crew ideas for those already.
Top

Always great to see more Medivo stuff! The classic feel is too real.

Armoury: The Realm of Frostborne , The United Empires of Esduin / The Story So Far: Frostborne Kronicles
Top
Post Reply
8 posts • Page 1 of 1