In the month of September, all across the Legitimitium MultiVerse, ABS and established parts grow mysteriously rare. Building slows and, as it does, minifigs all over the BrikVerse begin to lose their grip on reality. They panic. They riot. It's really just another excuse to beat the snot out of one another. Some point to the sudden appearance of massive SHIPs during this month as a correlation but many BrikVersian scientists are dismissive, citing a favorite adage that correlation is not causation. Perhaps they are right or perhaps they are covering for their governments. Either way, for the average minifig, it's just another reason to pick up a pitchfork. Maddened, howling minifigs the BrikVerse over frantically scramble to tear up as many briks as they can find and assemble some kind of reality out of them. Mechaniks and Konstruktion Workers who have let their little contractual projects and sites sit untended for the entire year suddenly get all their work done this month and collect overtime pay for doing it. Like a busy hive, minifigs swarm creation, desperate to do anything at all to avoid the existential despair of endless blank baseplates and massive bugger off starships in their skies.

Participants will each create one or more "builds," in real bricks or in LDD, composed of one hundred (100) pieces or less, and capture a comprehensive set of images that show it off. A "build" can be anything from a microscale vignette to a small fleet of ships to a mecha. Anything at all. Build whatever the hell you want. The Judges will have their own views on what constitutes a complete build and that will show in their scoring, particularly in Style and Substance. Please post anywhere from 1-10 images. If building LDD, participants should include an .lxf file. If building IRL, participants should include a parts breakdown image in their photo set. Simply create something BrikWarsy, preferably something that references the rulebook, the lore (community or official), and/or the history.

Those wishing to participate in the contest should submit an original build via a new thread in the Armoury forum between September 4, 2020 and September 30, 2020, including the identifier tag [HPH20] in the title.

Judging of the entries will commence immediately following the contest, beginning October 1, 2020, and will end no later than October 7, 2020. The final scores will be announced and formalized in this thread on October 8, 2020.

The Story Score will only be used in the event of a tie between entries.

The participant with the highest Final Score will achieve 1st place, winning the contest, joining the pantheon of BrikWars StudGods, and gaining full on bragging rights. They will also earn a unique custom badge, which will be pinned to the winning post and generally used however the winner sees fit (such as its inclusion into their forum signature). 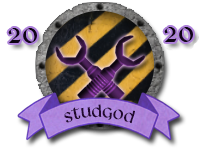 Enjoy the Buildoff! Happy BrikBuilding and, as always, Have Fun.

Who are our judges this year?
Quantumsurfer's Narrative Index
Top

Normally I avoid judging contests I plan to contribute to, but I can judge this year.

Anyone else, we need two more judges for this contest, please.
Quantumsurfer's Narrative Index
Top

My judging is in. A lot of good entries, made it harder that nobody phoned it in with a beach episode.
Armies: https://brikwars.com/forums/viewtopic.php?f=17&t=18070

I'll secondary judge. Judging should be done when you see this
Soaps and Armoury posts

Deepest apologies for the incredibly late response in tallying the results here. Going to do that now.
Quantumsurfer's Narrative Index
Top

Thanks to all participants for your entries into this year's Hullabaloo.

Well done and congratulations. About as many entries as last year, so we're holding steady for this contest. This year's entries were very fun and very tightly designed. They seemed, as a whole, representative of a diversity of BrikWarsian ideas and I'm certain the range and talent of these builders is much appreciated by the community. Shout out to our second and third place winners, Falk and Space Bunny for some incredibly compact and slick designs. Apologies for the lateness in tallying the final results but much thanks and appreciation goes to the judges who got their scores in anyway. I hope this year's entries inspire more builds in the months to come.


The 2,020 Hundred Piece Hullabaloo Winner and our new StudGod

Wow, every build was really good. Nice job everyone