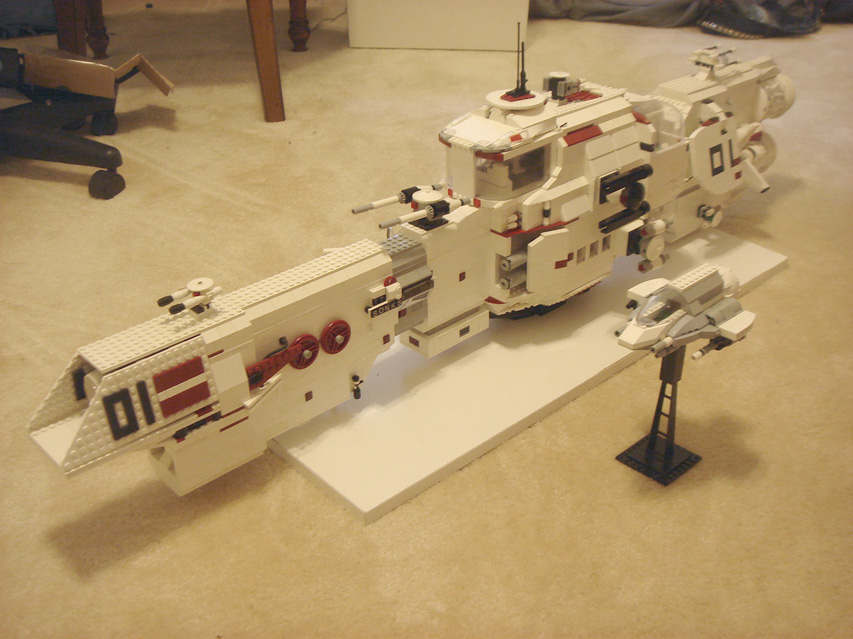 It is finally finished. The Assyrian Venus Class Destroyer is now ready for service. 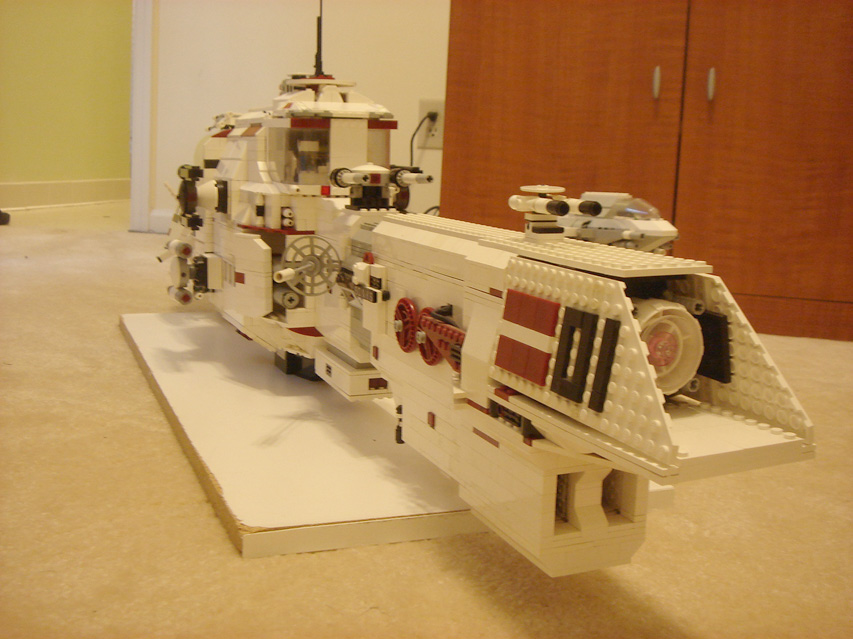 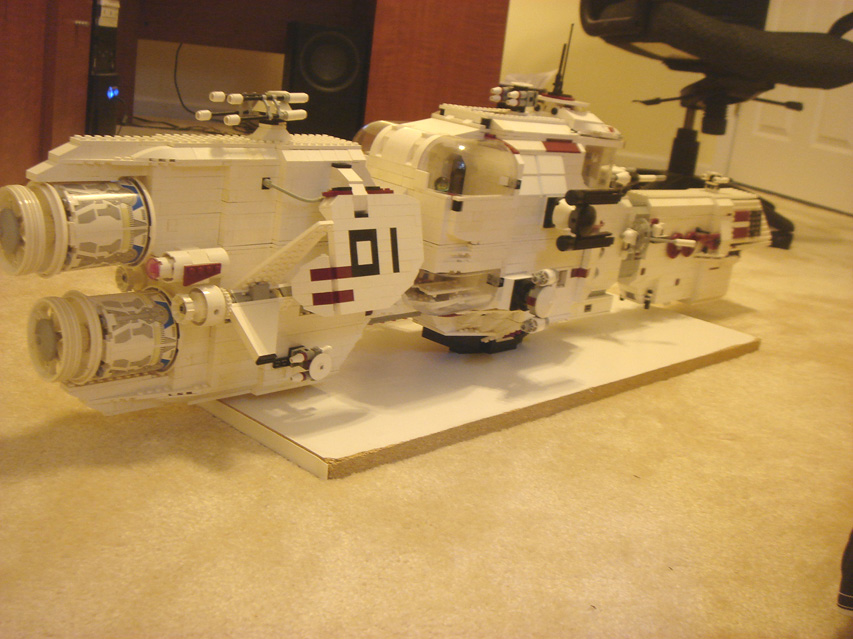 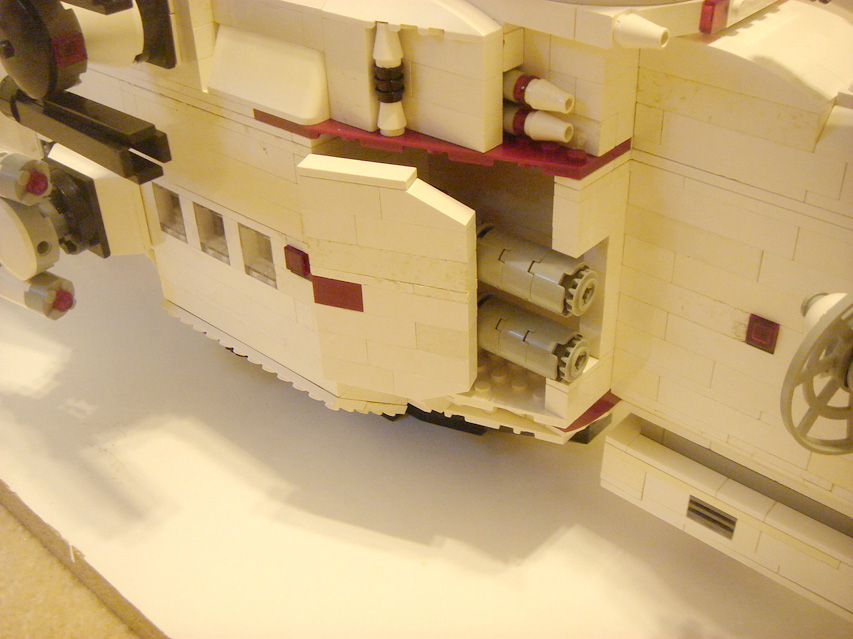 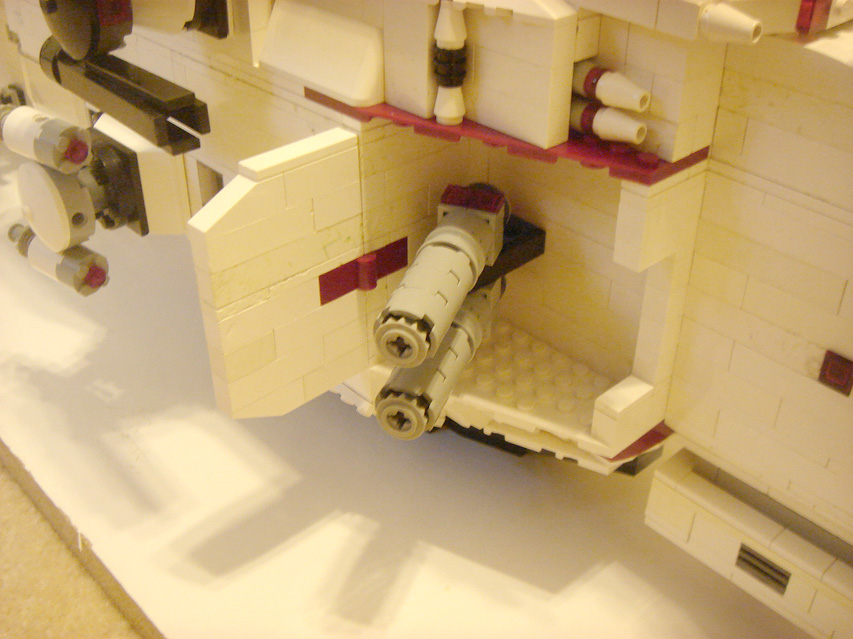 They can be turned out sideways to fire at enemy ships which come along side the Destroyer. These are the most powerful turret-based weapons the ship has. 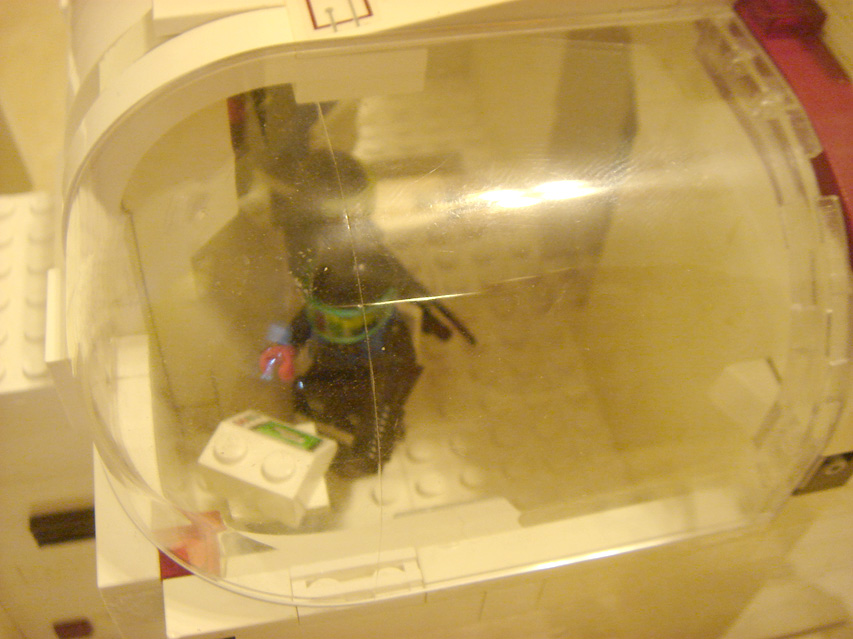 Up above is the command deck. Some of it looks quite similar to the older version. However, you will note that the walls underneath the glass have been raised above where they were on the original. 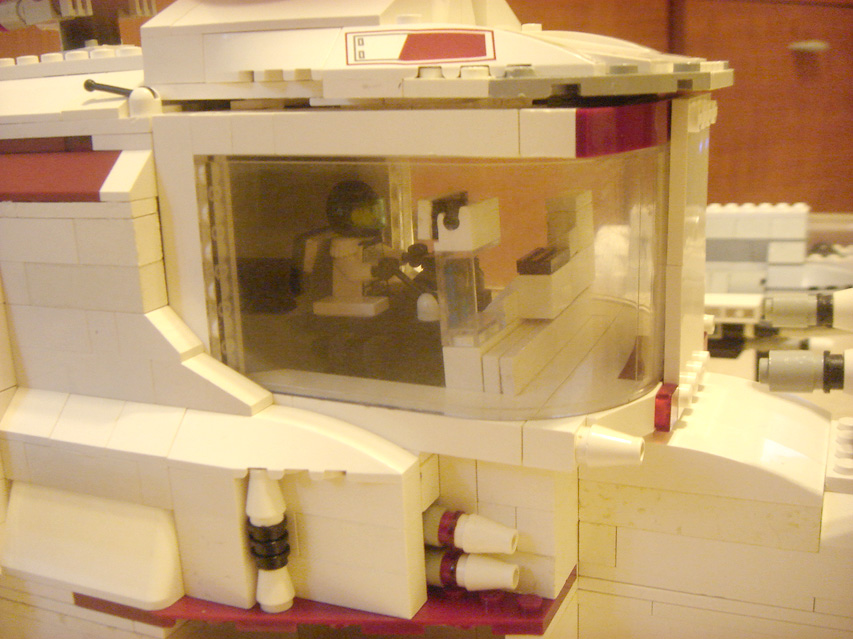 Major Natalya is at the controls. Her station is also very similar to the original, but it has been moved up along the hull, to a more forward position. You can see a couple MK-II seeker missiles mounted here as well. The ship has a number of them to be fired at enemy fighters. 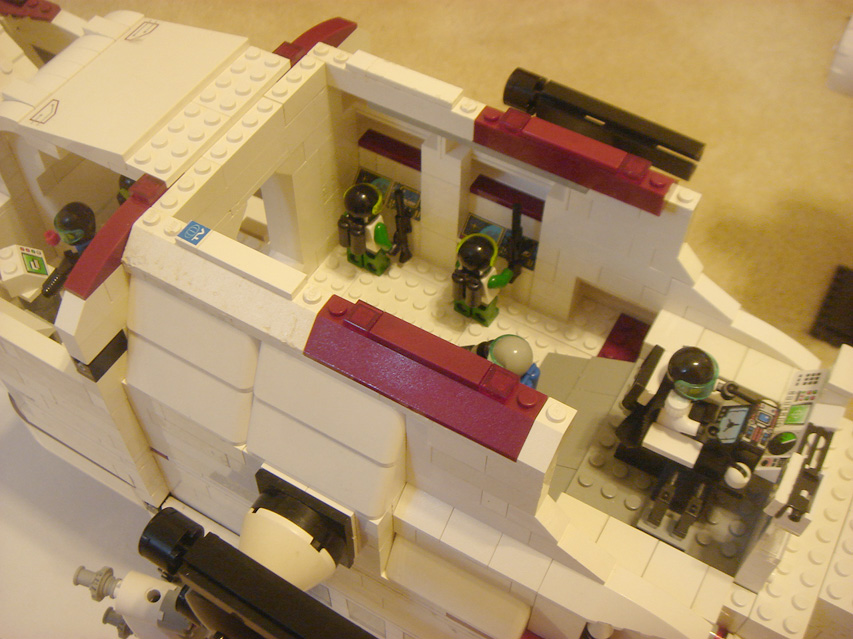 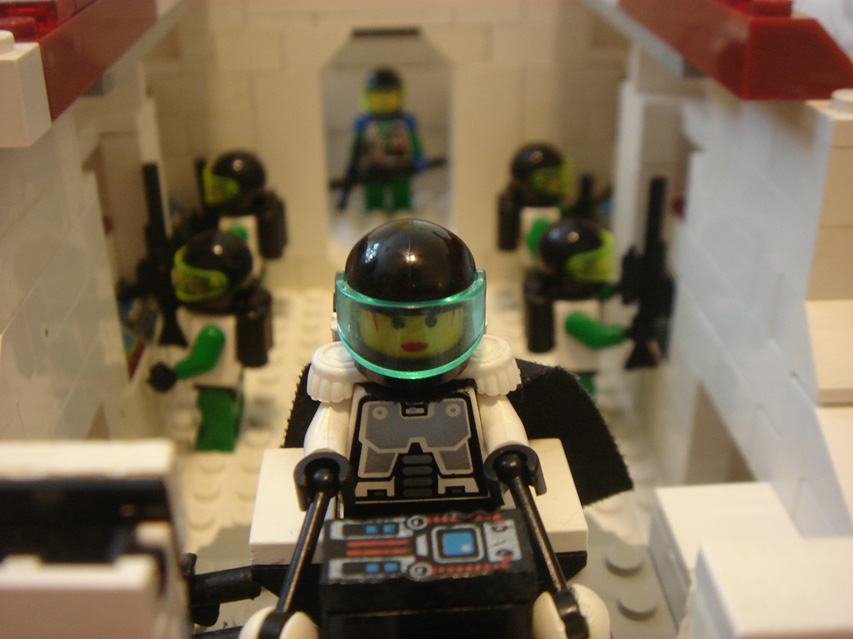 Those green guys are extra help on the ship -- they are not part of the normal crew. However if the ship comes under attack, they are here to help out the main crew. These guys here are at computer stations so they can help the targeting computer aim the gun turrets at enemy ships and stuff. Major Natalya can command all of them to shoot at whatever they see near them, but she can't give them all a bonus skill roll. Having more people manage the weapon stations means each minifig can add their skill to the targeting computer skill for a specific gun turret when it fires. 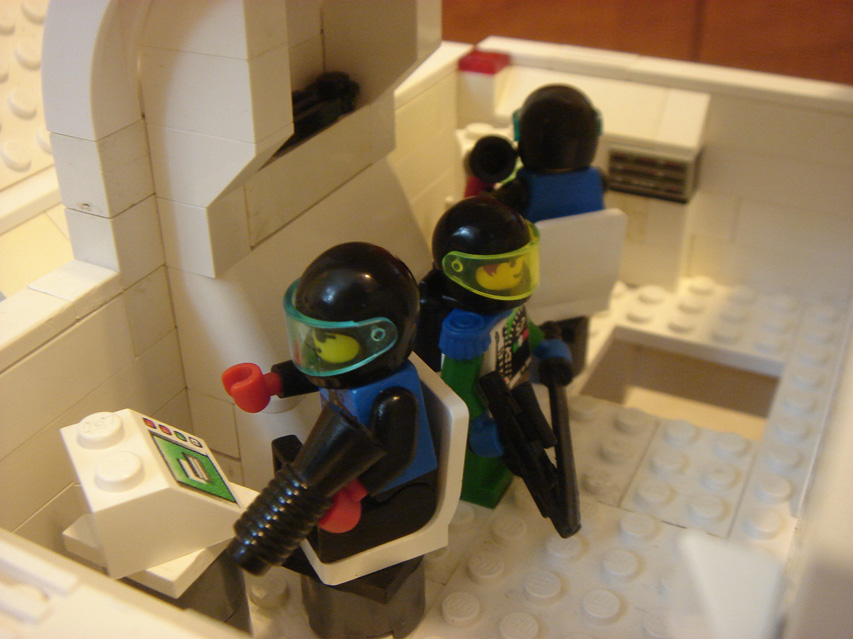 The rear of the command deck. The green guys on this level are part of Blue Squad. Their officer is seen here. Those two blue guys sitting down are part of the ships normal crew. These specific ones count as pilots. 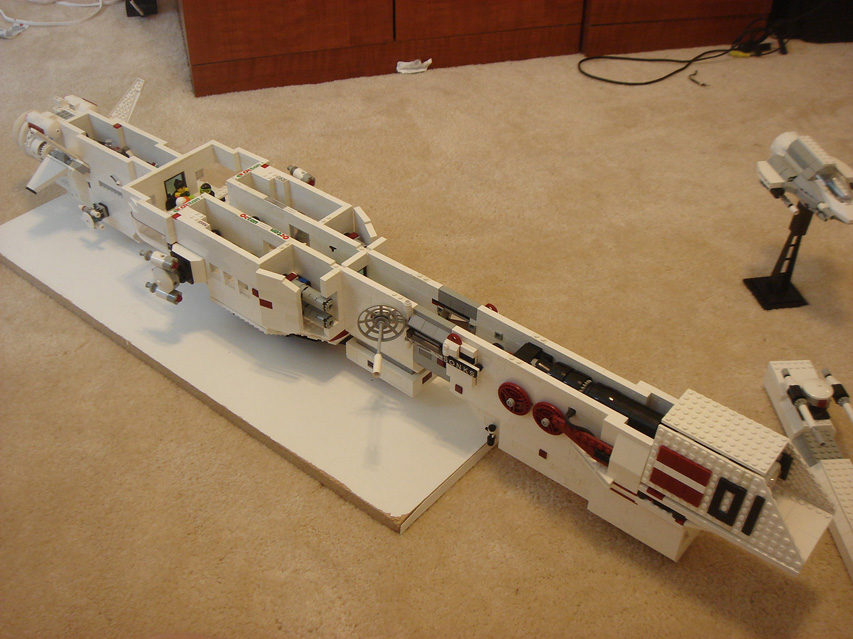 Let's take a look at the lower deck. 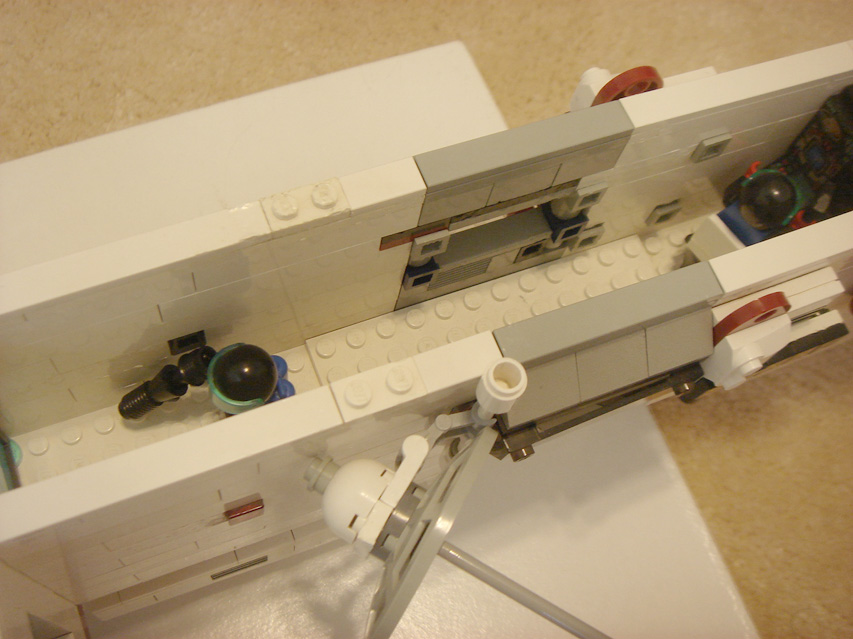 At the front of the ship is of course the guy sitting at the controls for firing the main cannon. Major Natalya could fire it from where she is, but it's best to have more than one station for stuff like this. The other guy is one of the security people on the ship. 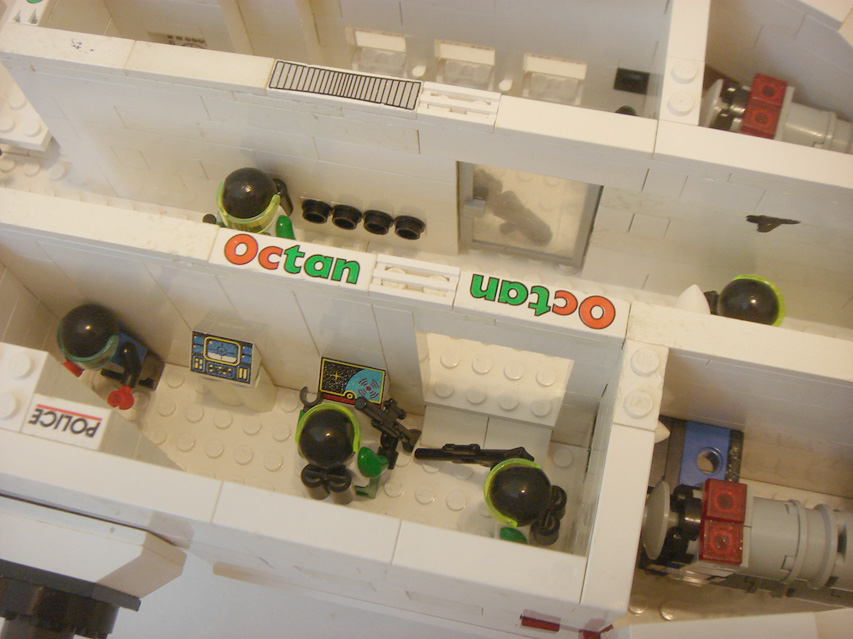 More of the green guys. (I'll explain them real quick.) You can't see it but the blue guy is at a control console for one of the gun turrets. 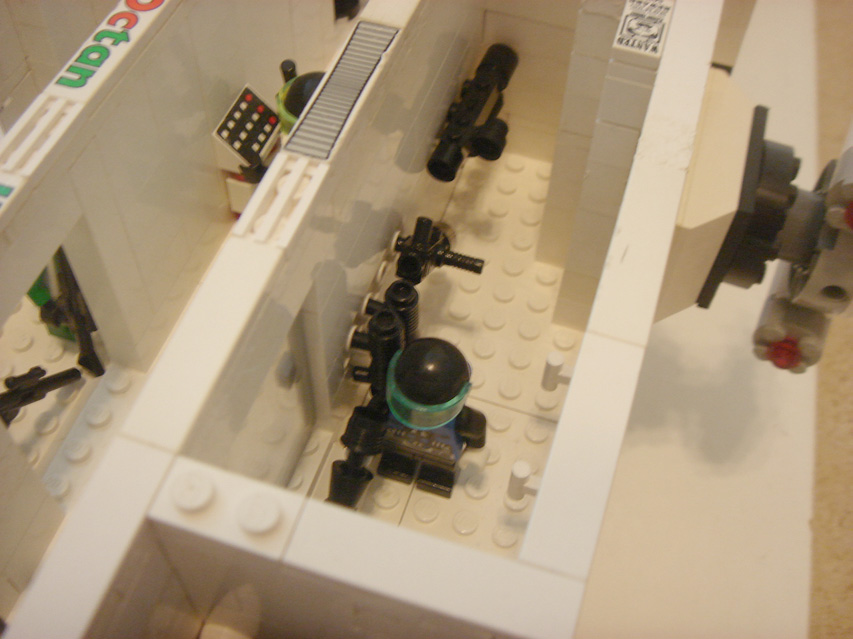 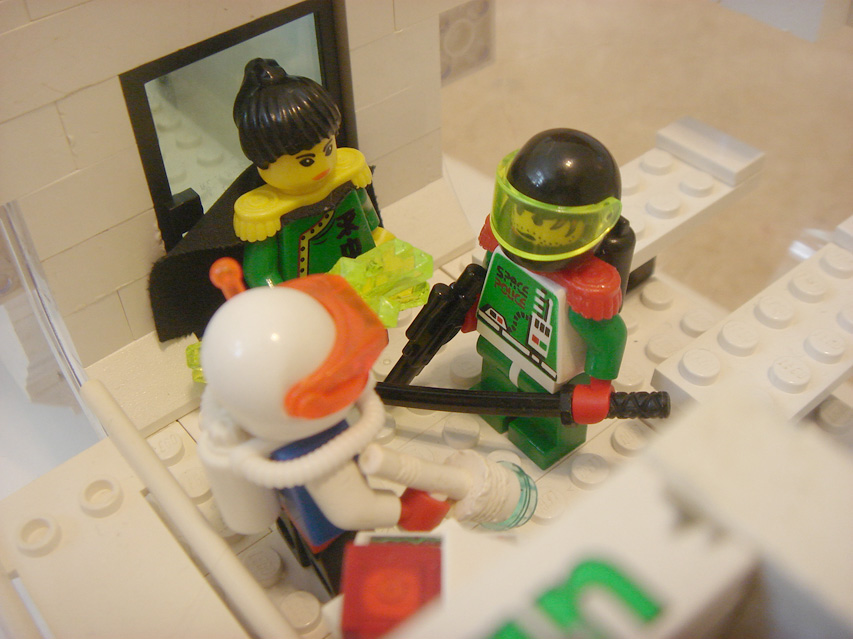 Here we have the commander of Red Squad. They are all the green guys on the main deck. Also pictured is the ship's Medik. He has a healing gun and a medical bed. The green lady is Assyrian Empress Xianghua. She was the adopted daughter of the emperor, but he died unexpectedly before fathering any children of his own, so she has inherited the throne. The green guys are the Assyrian Space Police. They typically enforce interstellar law, but they are also charged with protecting the imperial family. There are ten of them on this ship because Xianghua is on-board. 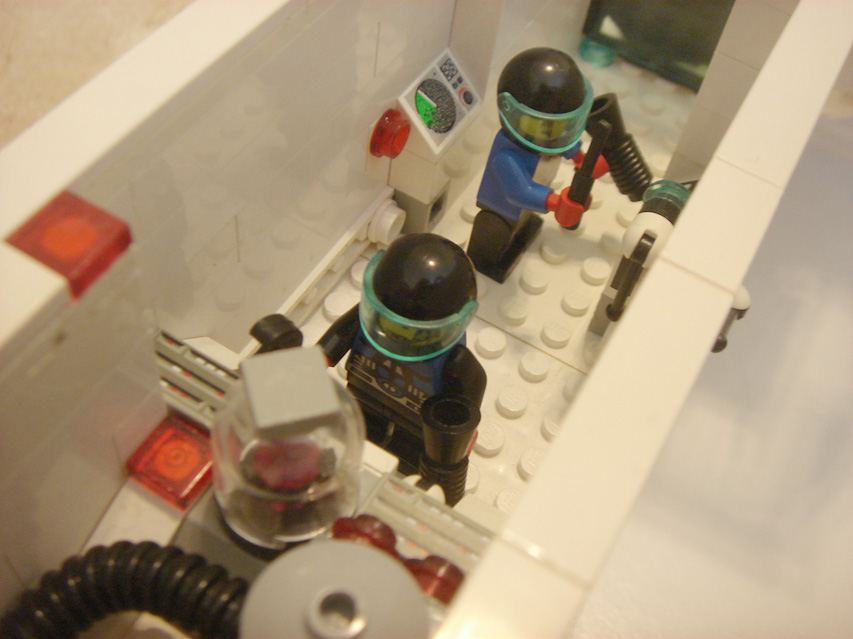 Behind the force field door is the reactor room. The crew members here are engineers, and they get tools so if something gets broken they can fix it. The normal crew is composed of 4 engineers, 2 pilots, one medik, and three security officers. Major Natalya is typically the commander, but she isn't always on-board. 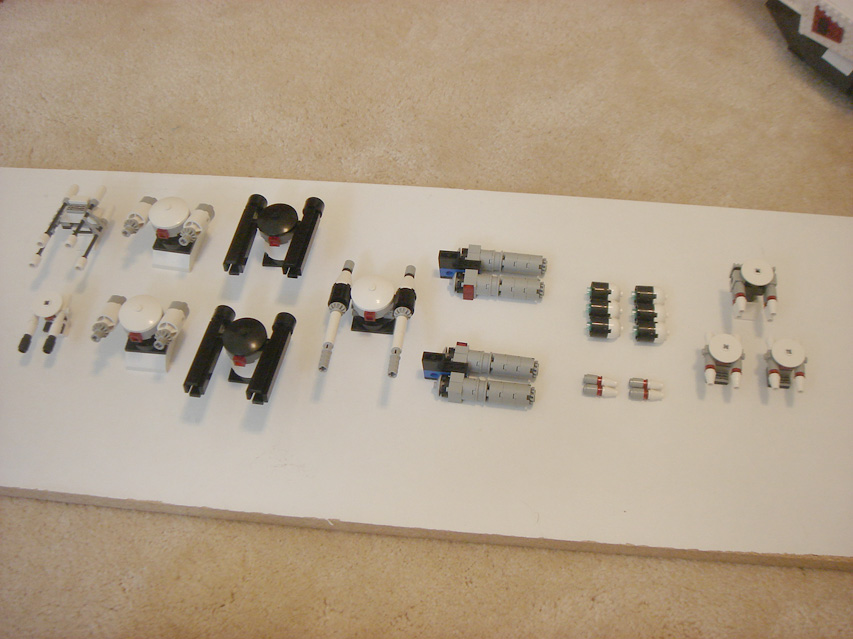 Here are all the turrets and launch-able weapons. The ship is approximately 48 inches long, so it gets 96 inches worth of weaponry, most of it turret based. Then it also has a bunch of launch-able explosives, namely the MK-II missiles.

Bottom left is a Light Laser Cannon turret, and above it is a Quad Auto-Cannon turret. To the right is two Laser Cannon Turrets. The two black turrets and the big black and white turret are Heavy Laser Cannons. Then you have the Light Super Lasers. As for explosives, the ship carries 12 MK-II missiles. Those black things are MK-IV "Fat-Man" Torpedoes. They've been with the ship since the first version, but have never seen battle. They are housed in a compartment underneath the Turbo Phase Cannon. Speaking of which, I have reasoned that it is probably best considered a size 16 weapon as opposed to 20 which I was thinking earlier. The cannon has a 4 x 4 bore which would have meant it got 2 extra square levels for size, but then at the same time it's also very long meaning it would need to be that big in the first place so I'm not giving it the full size bonus that I had come up with. Also not pictured here, the ship has two Heavy Ion Cannons (Size 4) mounted under the TPC as well. 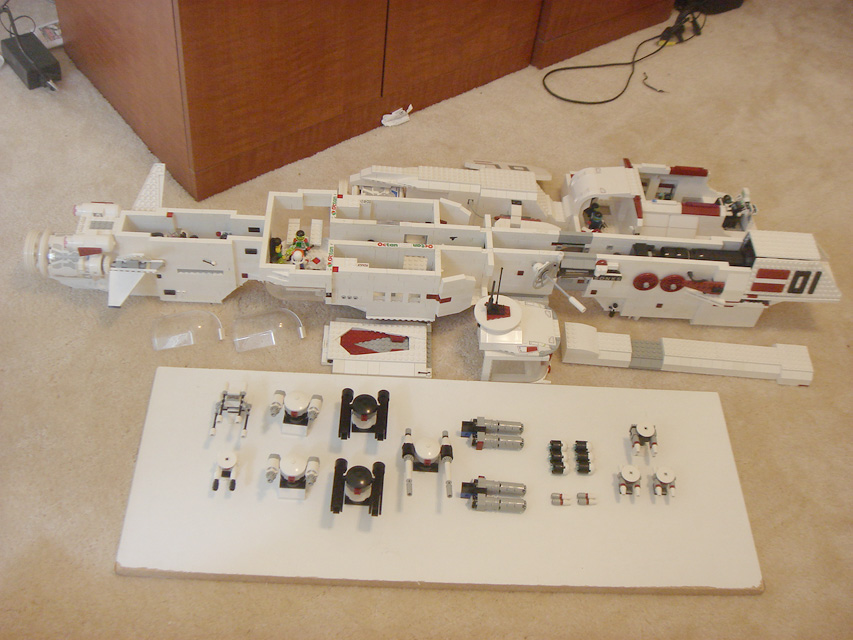 And finally, the whole ship exploded so you can see everything. The Destroyer isn't the biggest ship on the forums anymore, but now it's probably one of the meanest.

Not everything has been worked out yet for this ship, but that's all the important stuff up there. Other things I don't really know about yet are the Deflector Shields and how to make rules for the Targeting Computer.

In any case, the ship is the most powerful vehicle I've ever built, and could probably screw the AC over if they had a fight. I hereby demand that RoC or someone come out here and we have a massive ship battle.
▲
▲ ▲

tis awesome. obviously heavy weapons are good, and nice internal layout. if i could id jump ship and head out your way damn my cash strapped condition. caus id love a good fight
DARN
Heavy Destroyer Class Carrier Hybrid HODGEPODGE
# odds and ends: a motley assortment of things
# patchwork: a theory or argument made up of miscellaneous or incongruous ideas
Top

I'm not usually into space, but that is a seriously sweet ship. Very, very nice. You must have a healthy sized Lego collection. How old are you?
Top

/bangs head on wall repeatedly
Been here longer then pretty much all of you or some shit.
Top

that makes me want to go up into my room for ten hours and come out with a magnificent ship which will be crap compared to this
My doctor says I have an obsession with vengance. We'll just see about that
My 550th post was "JANE-FREAKIN-GOODALL".
I called the Ghostbusters in my 600th post.
Top

bbrunskill wrote:I'm not usually into space, but that is a seriously sweet ship. Very, very nice. You must have a healthy sized Lego collection. How old are you?

Ogel96 wrote:that makes me want to go up into my room for ten hours and come out with a magnificent ship which will be crap compared to this

She was a formidable lady when she was a Corvette and now as a Destroyer she is a fem fatal of exceptional deadliness. I'm sure you don't need me to tell you so but this is an awesome piece of talented work and well thought out, which makes it even more awesome.

I liked the back story for the Empress. Always handy to have a few more Marines on board too.

I just wish I could match the Thunderchild against this monster. Alas, it is not to be.

WIN. You took the corvette version and made it smoother, cleaner, more menacing and generally more awesome.

[buzzkill]the area around the Light Super Lasers looks kind of rough and incomplete. Increase the size of the cover flaps and/or put in some greebling there, please[/buzzkill]
Last edited by Theblackdog on Sat Sep 17, 2011 2:50 pm, edited 1 time in total.
[21:30:33] Scritch: you can put it in theblackdog

Yea I'm still not sure I'm satisfied there. They had crappy plating when it was still a WiP so I beefed them up to full armour walls, but maybe they're still not big enough.
▲
▲ ▲

This is great, a big improvement from your last.

As for those turrets, I would just take that hinged door off and put armor around the turret base. It would look more natural that way in my opinion.
Top

mostly perfect, just a few parts on the sides that look a little too forced. and the little wings way in the back look out of place with the rest of the ship. maybe add some curvy pieces.
Top

Very, Very Impressive. I wish I had the resources for such an undertaking, but alas, 'tis not to be (although... This does give me an Idea... heh heh heh,

Interesting that you actually have stats for it, have you used it's previous incarnations in brikwars before? (I know the ship itself has been on the forums, but have you used it in battle?) also, what with it being so huge and labor intensive, would you if you had the chance?
Top

Now you need to load it down with explosives, fly it to California, and slam it into the broad side of Strana's ship.

Dude, it's a reasonable question. Age puts the MOC into context a little.
I mean, if that was built by a 14 year old school kid like yourself it would be an incredible, unbelievable acheivement.
If it was built by a 46 year old Lego Designer with unlimited bricks and 40 hours a week to work on it, it would be cool but not amazing.

Natalya, I meant what I said, brilliant, fantastic MOC. I couldn't do a ship anywhere near as good.