The mounted knight charged... and missed.

The Bloodmage attacked, but failed to kill.

The phalanx attacked in turn to get the cavalry commander down on the ground, but even with all that they didn't manage to do anything but wound his armoured horse.

No sweat, Rax still made the leap...

He knocked the cavalry commander down and prepared to strike out...

The commander's armour saved him.

"Nnnghh! My dolls ran away!"

"Ehh... We'll let you load the catapult, will that make you happy?"

Mumbles managed to do something useful, creating a magic projectile...

A spearman was crushed.

Could the crossbowmen hit something this time?

Two kills, it's an improvement.

The demon, a disturbing vision that was so far ignored, spotted something in the distance that attracted his attention.

So he moved towards it.

The glider mages flew in and opened fire.

"Concert's over, it's killing time!"

The Queen smashed her guitar on the ground, sending a shockwave rippling through the ground towards what was left of Grim's Legion.

It disrupted his forces.

The mages then formed a wide front and launched their offensive spells as one...

... smearing all but two of the remaining infantry.

With another whopping damage roll, Kage slashed through the two remaining disrupted soldiers.

The rest of his forces moved on.

Except for one, who grabbed a bow and fired, but didn't deal enough damage to kill his target (an archer).

The Trogdor took his place to show him how it's done.

Sargus dove head first to smash into the Falx, and the bodyguard barely managed to push his commander aside...

A second later he was crushed, the wall gave in under the force of Sargus' headbutt, and Grim was crushed under the falling rubble... (rolls went very badly for the Falx). The guy on the walls also didn't survive the fall.

Sargus got up, happy with the destruction he had wrought.

The Bloodguard sprinted and hopped onto a horse, then swung his sword like a whirlwind around himself.

Two archers exploded in a haze of blood.

A marine on the wall was speared.

The crossbowmen picked up swords and started to climb.

I gave Grim a chance at redemption because he's resilient, but he failed...

"They're breaking through, send for reinforcements!" the Summoner called. He then used his magic to cancel the rains, allowing the guns to be used again.

And the Urban Guard who had made it to the walls immediately suffered the same fate as his predecessor.

The mages got a scare as they were suddenly fired at, but none of them died.

The water elemental jumped over the wall and attacked the White Dragon Knights, but missed. Brockram hacked at its leg with his counter, but didn't manage to hurt the monster.

The rest moved to defend the gate.

A little touched or so we're told,

Killed his wife 'cos she had a cold 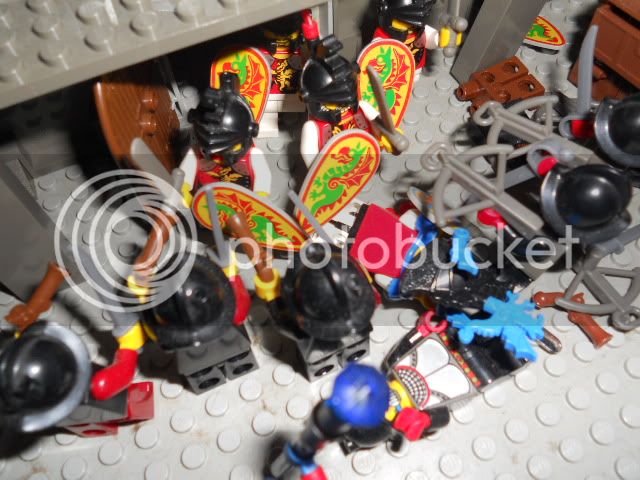 The WDK's rushed inside, straight into the face of the response fire...

Two of them died, but the survivors retaliated.

The Summoner, quicker than he looked, sidestepped and blasted Brockram in the face with his staff, but his helmet saved him.

Brockram then attacked, chopping through the Summoner's defences, but his staff took just enough off the edge of the attack to save his life even as it broke apart (-1 HP).

The final archer moved up, but couldn't quite get a WDK in his line of sight...

He wasn't impressed, repelling their attacks and sending one assailant's head flying.

Sir Pablo was attacked as well. Lacking a shield, he chose to parry, and it was a wise decision, for the spearman's thrust would have surely finished him if he hadn't.

Javelineers threw stuff at the phalanx's back, but didn't kill anything.

The cavalry commander managed to get up and stab Rax, but the armour did what it was supposed to do.

And so did his.

Rather poor rolls meant they could only set one crossbowman ablaze.

Spotting the opportunity, Alejandro (his feat failed earlier) then left the protection of his bodyguards and charged Pablo.

Lightning cracked the sky and bolts began to strike into the fortress.

These guys were hit and electrocuted.

And so was the Summoner

The Archon then took sudden interest in the gap in the wall, moving closer.

A flame appeared in his hand...

Son took the fireball to the face, and was the first to die.

Queen Lara: "Where do those Rebels think they're going?"

That was most of the factions, but I still need orders for Xalen (Silverdream), Zahru (Zahru II), Sir Pablo (RobotMonkey) and the Scallywags (Ham701)
Last edited by Bragallot on Mon Jun 06, 2011 12:14 pm, edited 2 times in total.
Fantasy battles - Scifi battles

Wait, what? I'm sure I sent in orders.

Did I read that right, my Titan actually did something useful? No, that's impossible...
Top

Unless you'd view knocking a hole in a wall, squishing a bodyguard, causing a sailor to fall to his death and an enemy hero to be crushed in one action, no, of course he didn't do anything useful, what were you thinking?
Fantasy battles - Scifi battles

Order'd, sorry for being late.

That Cavalry Commander is getting to be an annoying road block. It's not Silva' in disguise is it?

Not sure the falx can hold on too much longer.

Hey hey, none of my hitokiri died this turn! Onwards!
NO!THERE ARE NO POLAR BEARS IN FINLAND!!!

The squires moved up and fired, trying to liberate their leader from some of his assailants, but didn't kill anything.

Rather than attempting to kill Alejandro outright, Pablo chose to try and deal with one of the spearmen first. His sword landed on the soldier's shield however, and he was then stabbed, but he held on... for now.

"You heard the Queen, kill those rebels!"

Angryface charged towards the keep, but found Alejandro on his way, and their blades clashed soon.

"Outta my way, ya darn dandy!"

"You barbarians keep getting uglier and uglier!"

"Heh, that hurt pretty bad. Seems I can no longer hold back against you!"

In an instant, Zahru drew and fired his bow.

The arrow slipped past Xalen's defences, but got stuck in his armour. Barely.

Xalen got his shield in the way of the flying axe, again barely avoiding damage.

Expecting a follow-up attack, the dark warrior raised his scythe, but was surprised to find Zahru aiming magical spears at him.

"Is that it?" Xalen asked, blocking the first, puny throw with ease.

The second hit into his shoulder, but again failed to pierce.

It's amazing how he's able to attack like this, but his wounds have reopened and are bleeding hard, I just have to outlast his attacks a bit longer and he'll collapse.

"More things to throw at me? You're relying on a woman's tactic!"

Xalen blocked one knife (Zahru can throw two simultaneously) but the other caught him in the neck really badly, dealing 2 HP damage

Of the second flurry, a knife got stuck in his gut, dealing the third point of damage.

"Not really, but close enough."

His power is draining fast, I just have to outlast him Xalen thought, noticing how Zahru was weakening. (I'll explain quickly so everyone understands: Zahru's feat was to use all of his weapons once, at the cost of collapsing if he didn't manage to kill Xalen with all of those attacks. By this time, he had three attacks left, and Xalen had a +2 bonus to skill compared to him)

The broadsword was ineffective, clashing against Xalen's shield. 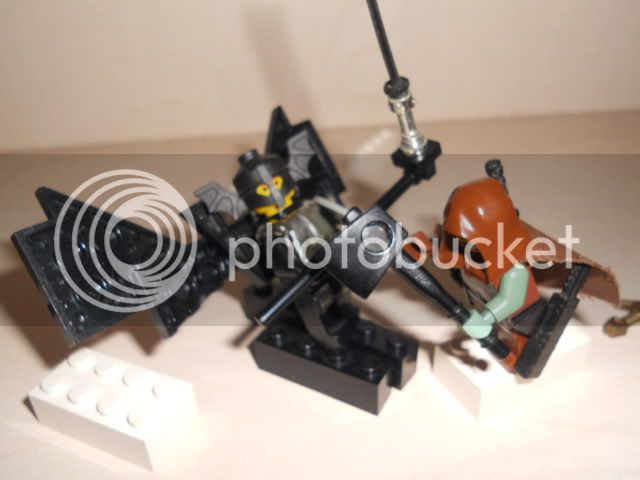 Swinging with both arms is he, he must be getting tir-

Xalen's thoughts were cut off as Zahru suddenly drew forth his katana and cut his neck, beating his armour by 1 point with his final attack.

"Ugh... I'll explain later. Right now we have a portal to destroy!"

My defeat may have been narrow... My opponent may have been formidable... But it's not enough. I need more power if I am to get my vengeance, and I know exactly where to get it Xalen thought.

I will claim the power of the portal for myself, and grow even stronger.

I'm not 100% what's going on with them, but if you need someone to take the Rednecks, I'm game.

Yup, I think I PMed you your objectives at the start of this. Also, just to clarify to people who aren't familiar with the storyline: Xalen is allied to the Kingdom forces, he just has personal motivations and his own way of doing things.

Edit: Fine Zupponn, they're yours. Psycho Dad was disrupted this round, but he can still attempt another feat next turn.
Last edited by Bragallot on Sun May 15, 2011 3:18 pm, edited 1 time in total.
Fantasy battles - Scifi battles

glad that Zahru won, though, and nice feat! Also, that's <a href='http://tinyurl.com/y42zurt'>alot</a> of weapons zahru has on...
Paladin Corps
Paladin Corps vehicles
Top

OK. I'll get some orders in.