"PULL BACK! To the other portal!"

A combined effort narrowly laid waste to Sir Pablo... This could have bad repercussions for the Kingdom later.

Some crossbowmen shot another javelineer.

Their final victim was a rifleman.

The crossbowmen then started moving back towards the phalanx's protection.

The final Elite started dragging the unconscious Mumbles away from danger. He didn't bother setting the catapult on fire because, well, it was broken.

The lead squire was not amused at his lord's death. The other saw his musket explode in his hand. Powerful weapons, but dangerous indeed...

((Maybe I didn't make it clear enough, but Psycho Dad was dead at this point

Gramps fired to avenge him, dealing Kage a hit.

The knight flew over the knight's heads, into the keep

"Cower, mage!" the knight hissed as the shadows thickened around him...

The knights couldn't react in time, Junatan's shield was cut.

"You bastard! You doomed us all!" 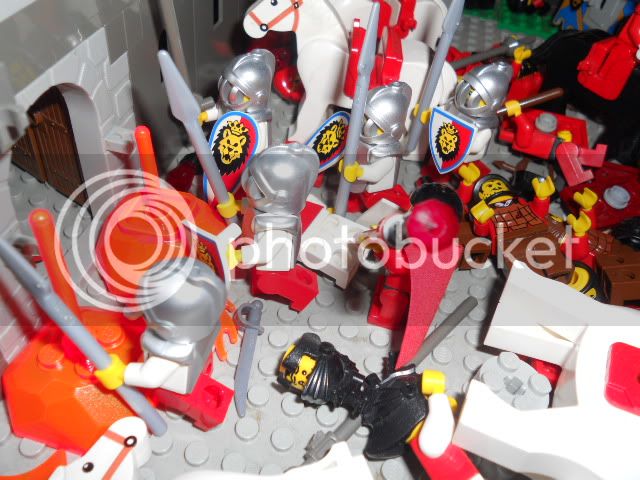 "Inside, quick!" (the Bloodmage allowed the Knights to sprint)

But their sprint rolls sucked, and two burned to death passing through the flames the dragon had cast.

"We are needed elsewhere!" Lara yelled, channeling a mass teleport... (she first crit-successed the feat, then critted again when I rolled for the number of guys that could be teleported along. That's Queen Lara for you)

"This isn't Junatan's doing! Now what?"

The glider mages flew into the keep and waited, keeping a close eye on the WDK's...

). The shades took the opportunity to slash him down to his final HP.

Seriously pissed off now, Zahru got up and hacked at a shade, who narrowly dodged...

"It's time I got serious!" Zahru exclaimed as he parried the counterattack.

Another shade bit the dust.

The others ran towards the keep.

Kage was ahead of them all, squeezing himself through the gap in the wall.

The dragon breathed fire on Xalen's wall, weakening it but not quite destroying it.

Brockram shoved the pesky samurai away from him and picked up a pistol behind his back.

"Retreat! Guard yourselves!" (crit success, +2 armour for the round)

And so did Alejandro. His feat saved him from being killed off by Angryface's free attack.

Sargus didn't like what was happening one bit, so he struck at the portal full force... Xalen's wall was cut and the portal slightly damaged, but most of all it revealed the dark knight was consuming the power of the portal!

Urban Guards finally killed one of the marines. On their round, they failed to do something back.

The final shade charged, but was parried.

The creature was forced to dodge Zahru's counter.

The Scallywag would have none of that crap and shot him in the back of his head, eliminating the undead threat.

Angryface seemed unusually eager for a Scallywag to run into the fortres...

"Xalen, what on earth are you doing?! Stop that immediately!"

ouch. Hope Queen Lara made it out ok.

Xalen, why must you do these crazy things when I'm not controlling you?
READTHEFORUMCODE!!!

Hah, good thing Kage was knocked to the ground, he wasn't probably harmed by the shrapnel...
Woah, I'm eager to see how this ends...
NO!THERE ARE NO POLAR BEARS IN FINLAND!!!

Everything exploded. I'd count that as a victory for both sides.

Some of the bulls are still alive, so I'd say at least my javelineer got out the other one.
Let's Play X-Com: UFO Defense

Killer Karetsu wrote:Hah, good thing Kage was knocked to the ground, he wasn't probably harmed by the shrapnel...

Actually I just realized Kage should have died from that Redneck's shot because he already lost another HP earlier '-.- A shame, I'll never forget his monstrous damage rolls. Well luckily at least my mistake didn't have any lasting effect.
Fantasy battles - Scifi battles

Oh. He killed a Giant anyway. And Trogdor is alive! As well as other hitokiri.
I think this was a victory for the Kingdom, as the portal was destroyed and the falx pretty much eliminated. And Xalen serves the kingdom, right? Nah, why would he, he has THE POWER now..
NO!THERE ARE NO POLAR BEARS IN FINLAND!!!

Lara might survive, as she was at max HP, but just about everybody else there is dead. Zahru lives as well, but the rednecks are toast. Any others?
Let's Play X-Com: UFO Defense

GeneralOfDeath wrote:Lara might survive, as she was at max HP, but just about everybody else there is dead. Zahru lives as well, but the rednecks are toast. Any others?

Redneck. Gramps was the only one left.

And was inside the explodified fortress.
Let's Play X-Com: UFO Defense

Aw. Good enough ending I guess.
she/her | formerly known as ross_varn | exiled for the good of the f.e.l.c.
Top

Really want to see a follow-up this cliffhanger ending is killing me!

Great battle, Xalen is becoming a worry to reckon with. Did I acheive my mission? Did any of my Bulls survive to slip away through the other portal or did they perish too? Can we have a kill count. It was a bloody slogging match of gore! Very Cool Brag.