"Hah! They blew themselves up! Not a good day for us still, but it could've been a lot worse!"

"Quick, through the portal!" 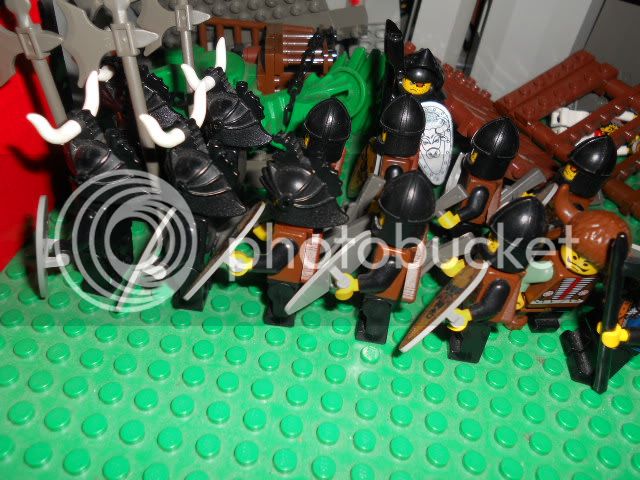 "FUNNY MAN GOT WAY. THROUGH PORTAL."

"Hah! The explosion allowed us to escape! Promoted to First Marshal and I even gained this nice souvenir, all by all not a bad day out."

"My lord, you should use the dragon to escape this land. The Kingdom's forces must still be in the vicinity."

Meanwhile, in a forest clearing not too far away...

"Our gold... our beautiful gold..." Angryface stammered, a broken piece of chest the only thing they'd managed to salvage from the destruction.

Bloodguard: "We got extremely lucky. The explosion left no matter in its wake, but somehow didn't seem able to kill sentient beings. Still, we've taken very heavy losses. Almost every regiment has been decreased to a quarter or less of their original number. On top of that, we've lost Sir Pablo, and Lord Kage has meanwhile succumbed to his injuries. I hate to admit it, but we might not have made it without the 'help' from our other enemies."

Lara: "At least Junatan didn't manage to claim the power of the portal, most of the Dragon forces he sent forth into our lands were destroyed and we're finally rid of those Rebels. It could've been worse... A lot worse." 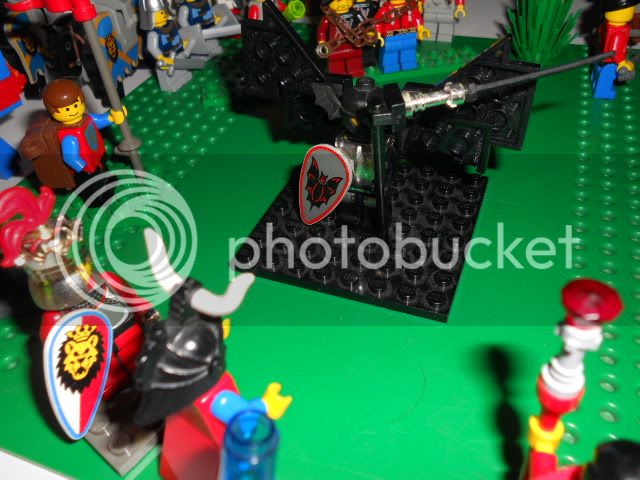 "Because of you, Xalen! Do you have any idea what danger you put us in?! If it weren't for my magic..."

"My only goal is to destroy Junatan. He is your enemy as well. You should be grateful I'm willing to go this far."

"Grateful?! You're just as power-hungry and evil as him! You attacked a warrior who was on our side and thus endangered our success here!"

"I'll have none of it! Xalen, you have become uncontrollable and a threat to everyone. You are henceforth banished from the Kingdom. I don't ever want to see your face again."

"I'll see what the King has to say on this matter."

"I hate it when he does that. Now, where were we?"

Sharlena: "Milady, what are we do to with these prisoners?"

"Hmm, there's only a few of them. See what information can be salvaged from them, then we'll trade them back for some of our people the Falx have enslaved."

"Hail, my Queen. I'm Jubei, Kage's brother. I will continue to lead our people, but if we keep losing family members at this rate, our lands are in danger of falling to territorial strife between the clans."

"I see. The Falx threat should be contained for a while at least now. Take your men home and try to think of a strategy that will make sure fewer of you get killed in the future."

Squire: "Sir Pablo has fallen! Now what are we to do? Who's going to lead us?"

"Continue towards Starkeep. There you will submit to the command of Sir Cales until we find another to lead you. He is a fine commander."

Bloodguard: "Finally, there's the question of those undead that showed up. Wasn't Phineus defeated?"

Lara: "The fallen wizard was claiming corpses. Whether it is Phineus' doing or not, this is evidence evil still persists in his Black Citadel, as my husband the King predicted."

Bloodguard: "This means Sir Garth must have failed!"

Lara: "No, the undead appeared from a small portal. It must be inevitable that they're able to slip small units past our ranks. Besides, I don't think Sir Garth has reached Phineus' Black Citadel yet at this stage. I'll order my Magus Guild to keep their eyes open and for all corpses to be burned henceforth..."

Bloodguard: "Still, I think someone should go take a look."

Zahru: "The undead appeared to be after me, even though I have no idea why. I prefer to headbutt dangers straight on instead of cowering from them, so I'd be willing to go... I'll need a guide though."

"You are a volunteer and free to go where you please and do as you wish, good sir. However, I can't spare even a single man until our lands are relatively safe again: that is, until we assert control over our passes again."

"Fine. Then I'll go there first. Those wimpy squires look like they can use the backup. I understand it's in the right direction."

At the Crimson Keep...

"Xalen. I knew you would come. I've already been informed."

"Your urge to destroy Junatan is commendable, but you must understand I cannot take the risk of letting the unity in my Kingdom dissolve at a time like this. I have to support the Queen's decision in this matter."

"Then what am I to do? Search for power outside this Kingdom? I can't increase my power if I cannot put it to use in the war!"

"I'd rather you didn't. There are currently powers at work in this world that are strong enough to destroy you even in your current state - you've already met one of them. Take my advice. Leave the continent. Use your ability to head South-East across the sea, and you will find a place you can reign free and increase your power."

"South-East? You know much, old man."

"So, will you take my advice?"

"I will, and when I come back I will be strong enough to get my revenge. Await my return."

So, that was Freedom's Blood, hope you enjoyed it! Congratulations to all my players, your orders are what made this game great and fun to host. I'll get the Kill Chart up sometime, stay tuned for the next fight!

So, here's the Kill Chart:

Epic game! And Anjadero got out alive, too! My only worry is that the explosion didn't kill a bunch of people, like explosions are supposed to...
Let's Play X-Com: UFO Defense

Hey, awesome. Thanks for the great battle.
she/her | formerly known as ross_varn | exiled for the good of the f.e.l.c.
Top

Great game, thanks for letting me be part of it! Also, quite clever transition

Your battles keep getting better and better, Brag. Can't wait for what comes next.

which will be Garth's journey, I expect. and if that's the case, I'll be watching intently (like I wouldn't anyway...

Bravo! Wonderfully done sah! It was a great game to be part of and I hope you enjoyed it even half as much as we all seemed to. Can't wait for more! Thanks!

Haha. Gramps lived. I thought for sure that he would be dead.

Anyways, awesome battle. It was fun to be a part of it, no matter how badly the Rednecks failed.

Bragallot wrote: I will continue to lead our people, but if we keep losing family members at this rate,

Anyway, a very enjoyable game, can't wait for the second one!
Ace job!

I really enjoyed playing here. I came to appreciate my hero, too.

If you're not into Metal you are not my friend!
Top

Heh, Vladek the giant only counted as one eh?

His Republic's Majesty General Anjadero wrote:Soldier, you are hereby promoted to the rank of sergant, and will lead a squad of javelineers in our battle to smite these barbarian tribes for their devious attack.

Guess what I'm trying to say is, can I have Anjadero next time he shows up?
Let's Play X-Com: UFO Defense

I really hope that I don't miss the next battle. Your games are always a ton of fun.
she/her | formerly known as ross_varn | exiled for the good of the f.e.l.c.
Top

Yes! It still only counts as one!

@ GoD: Maybe if you manage to get his name right