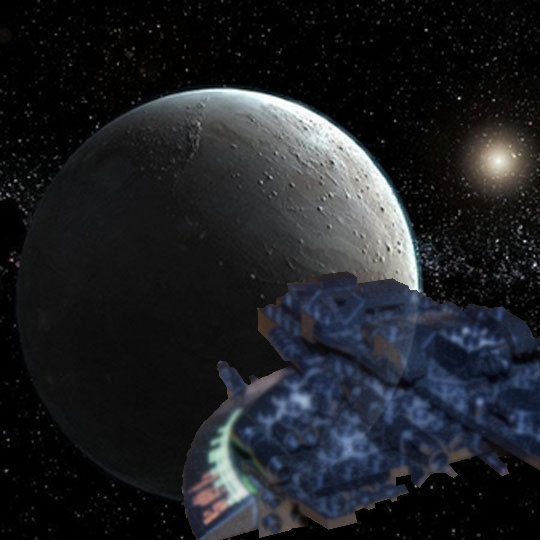 Situation: A oil cartel called Oilhead is pressuring a small town to give him all their monies or he will destroy it to make room for a oil refinery and processing plant. (He secretly plans to destroy their town whether or not they give him the monies). He has issued an ultimatum: Bring the monies to the desert oil rig building, or he will blow the town to kingdom come (his, hopefully). The villagers have hired Brikwater Inc. to save their town from absolute destruction. Brikwater responded quickly, and using a trick used by the ST:TOS producers to compensate for their odd lack of orbital descent vehicles. (yet)(obscure reference FTW)

Safely transported to the surface, the select team readies to assault the oil rig.
And here’s the point when I realize the rest of the pictures are hopelessly mixed up. Thus, this may get a little non-linear. 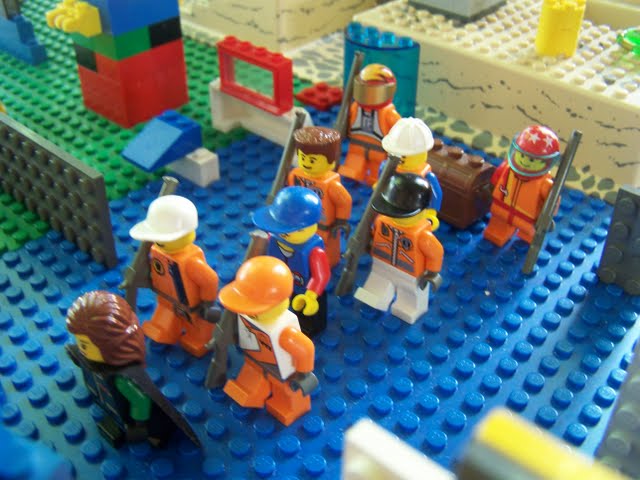 Meanwhile, the town guard, along with the town council, brings the monies to the rig. 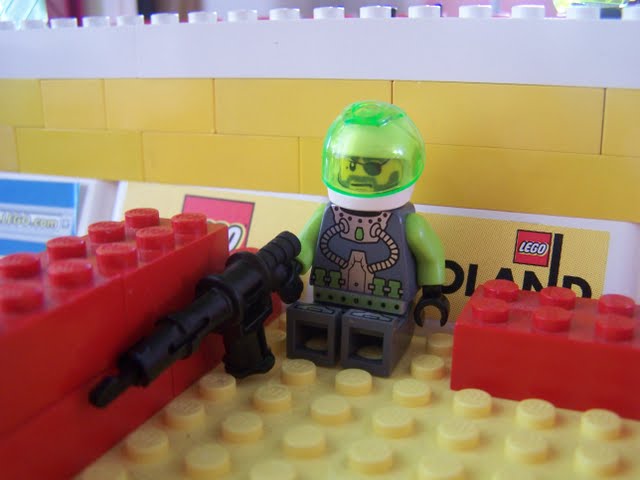 The rig is fairly well defended, by guards, aliens, Oilhead’s whores and a robot. 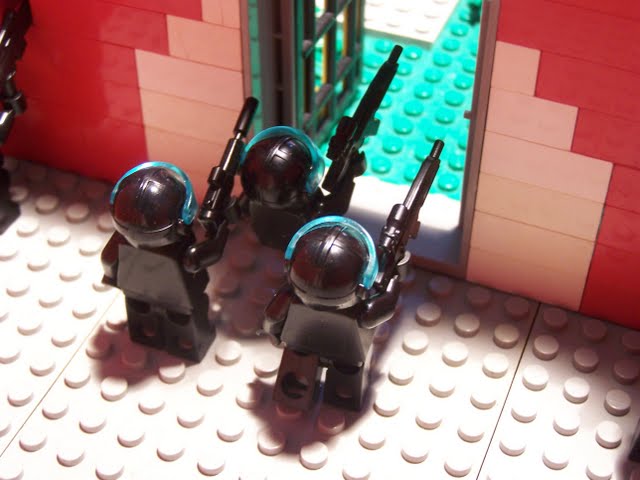 Without further ado, the riflemen kick out the door and start supplying suppression fire. 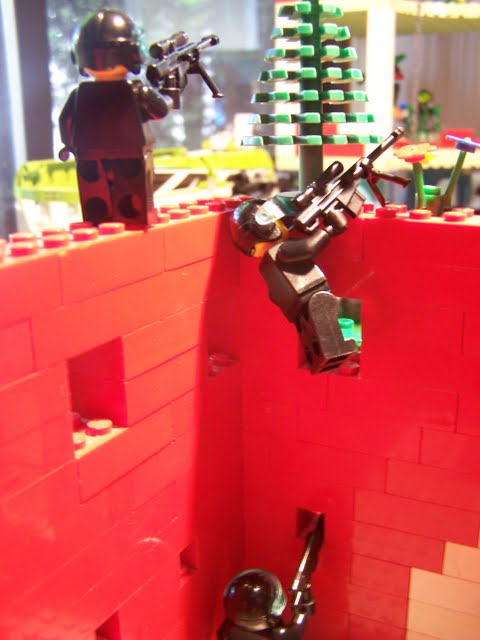 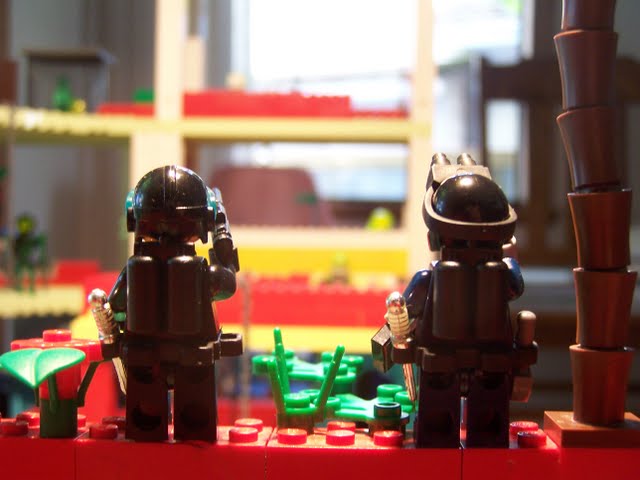 And the dudes with jetpacks to get ready to do something surprising. 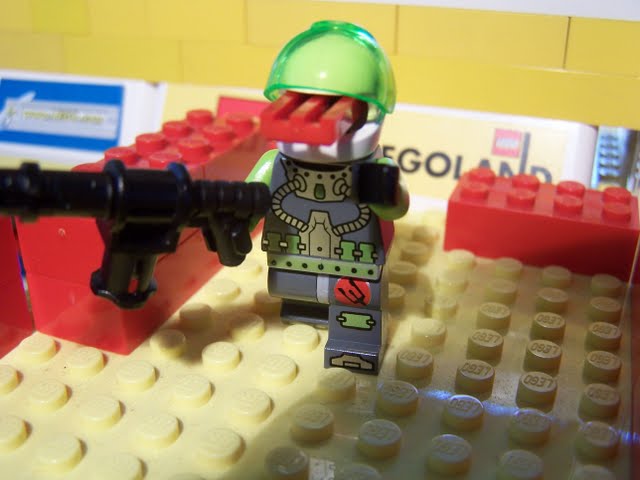 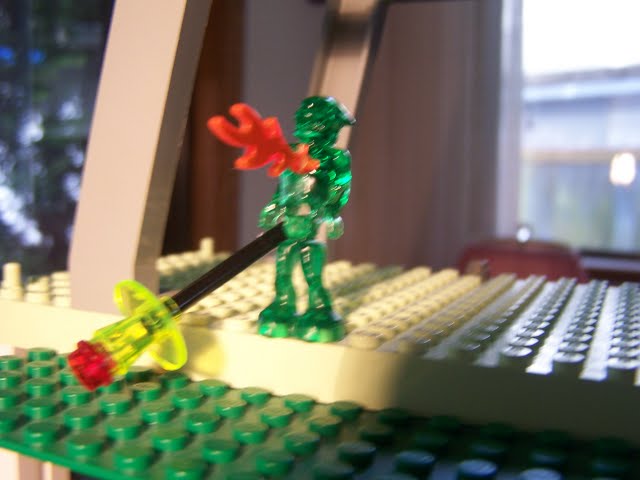 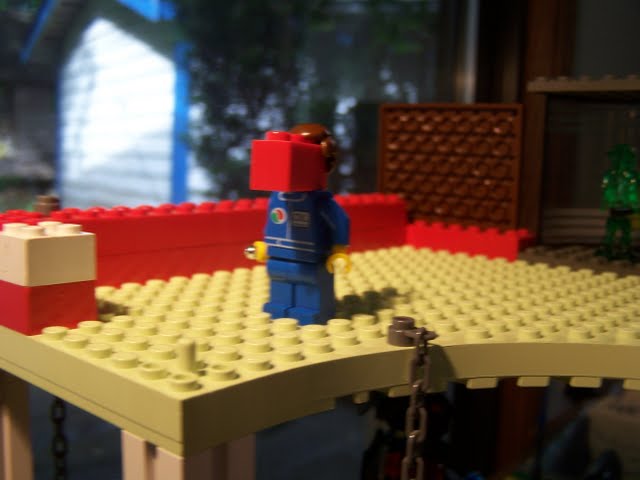 The snipers, trained pros as they are, take their targets.

While the scouts take aim at a far more metallic target. 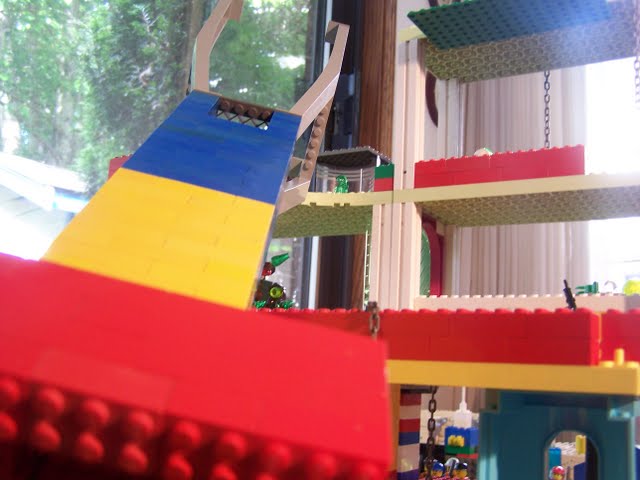 With a loud <insert> the main drill tower comes falling down. 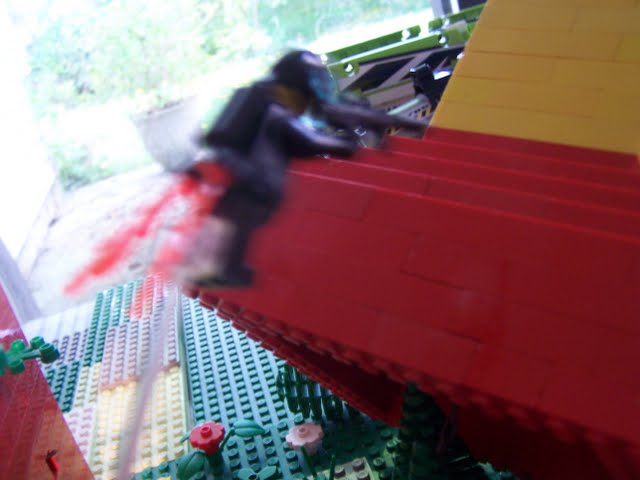 The scouts promptly jet pack over to it. 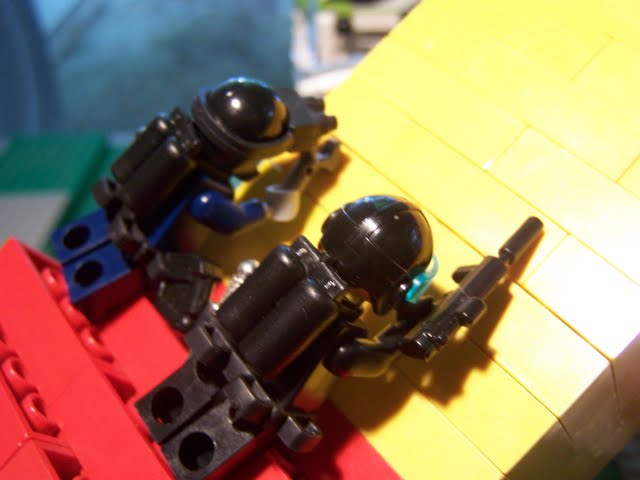 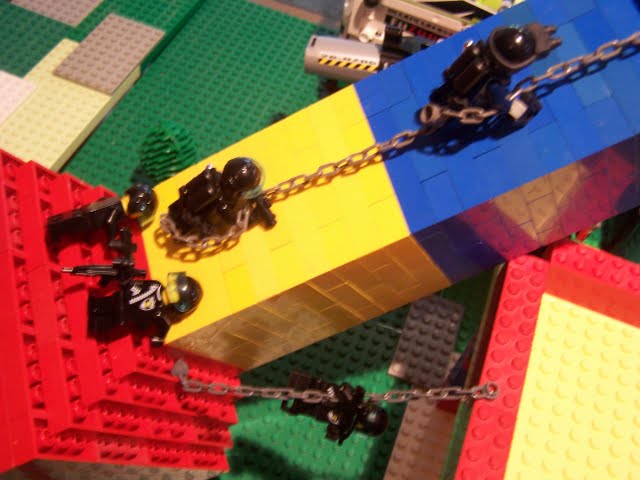 A second grappling hook is fired, allowing men to traverse to the second level au lieu of the third. The riflemen somehow manage to get to the top of the tower and start climbing down.

The guards continue to fire back, but to no avail.

An alien starts climbing up a chain to murder the guys on the tower. 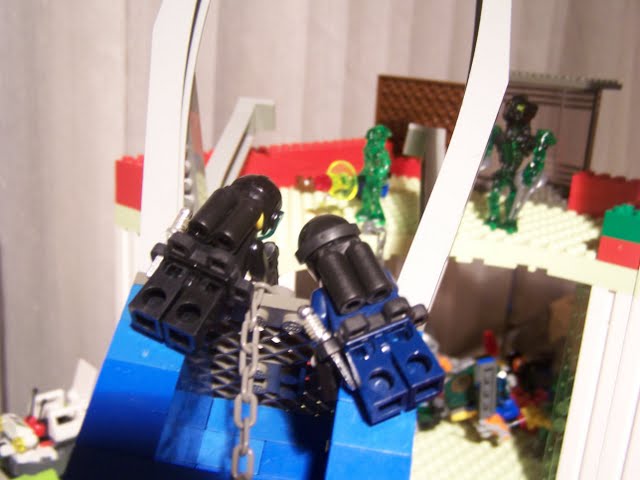 The scouts get to the bottom of the tower, but miss their shots
A scout is thrown back from return fire, but is unhurt. The other slides down the tower.

They then jump over to assist the riflemen.

The junkbot attempts to fire a rocket at the group of men, but fails and falls apart.

The alien jumps down to skewer the soldiers. Guess what happens? I mean, you’ve see this all the time in the movies, the soldiers are doomed. Unless... 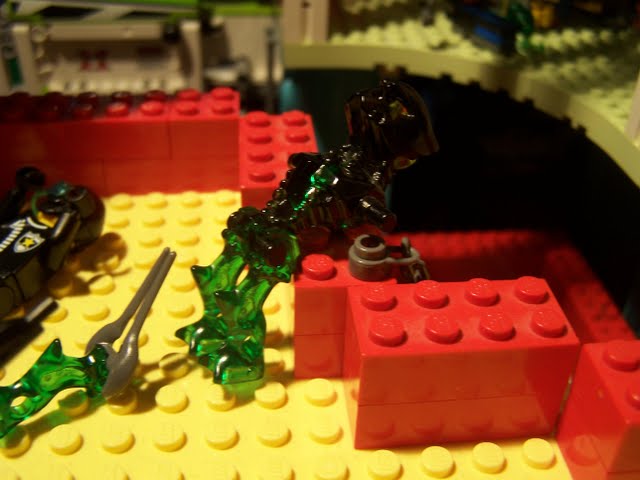 Yeah, the alien was outta Move, and four guys had a Response Action saved up.

Oilhead heads for the door. 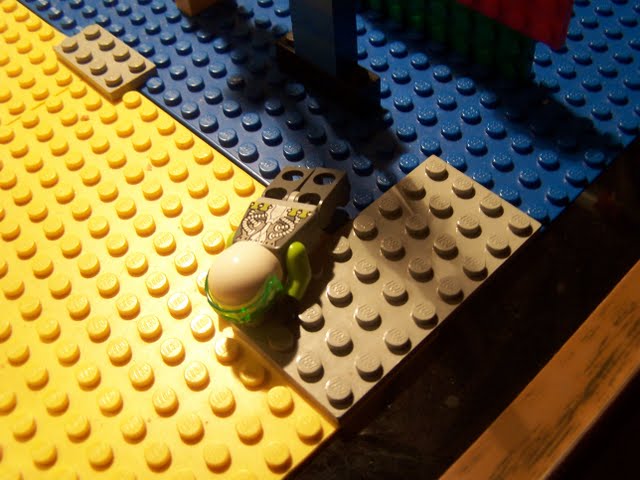 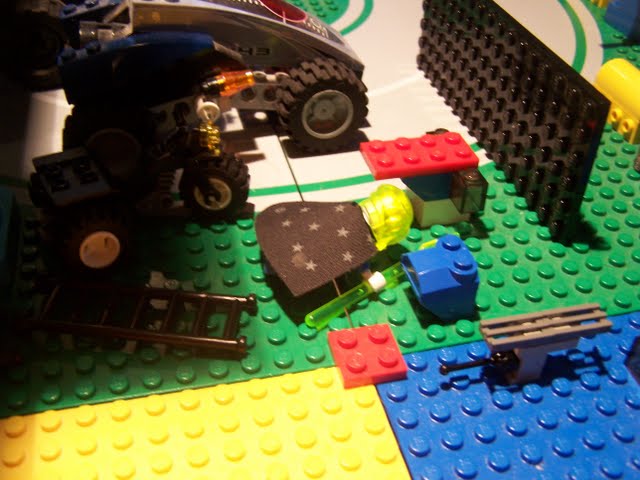 Meanwhile, Oilhead jumps down the ladder.

And heads for a trike to make his escape. 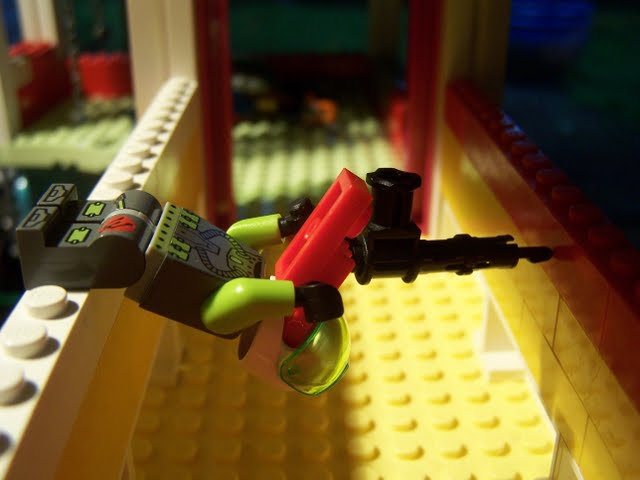 Another guard goes down with a splitting headache.

Troops start jumping over barriers to take out Oilhead, who is rapidly
getting away.

Last alien is eliminated by a sniper. 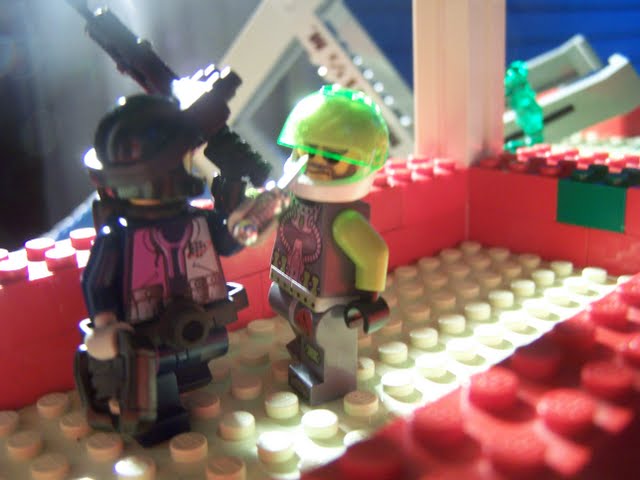 And the last guard gets a Asplodes Knife in the face.

The Scout jetpacks towards Oilhead, but falls short.

Two riflemen climb up a post, which topples, exactly according to plan.

Falling near Oilhead, letting one soldier grapple with him, while the other shoots out one his wheels. The guy grappling with him whacks him in the head with the butt of his gun, Stunning him. 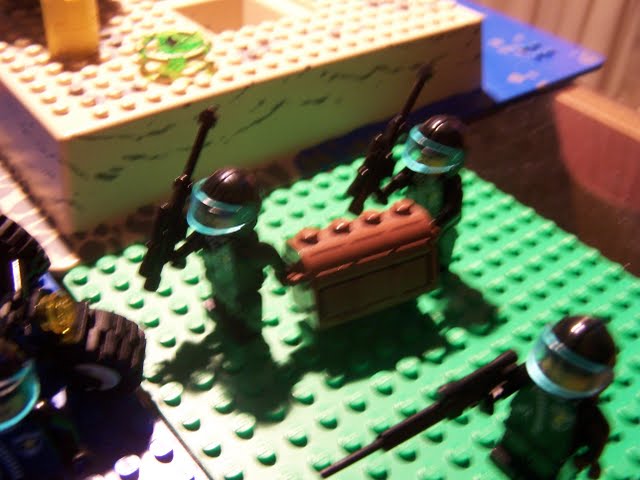 A short time later, they have acquired the monies from the grateful villagers. Who may or may not be now dead. 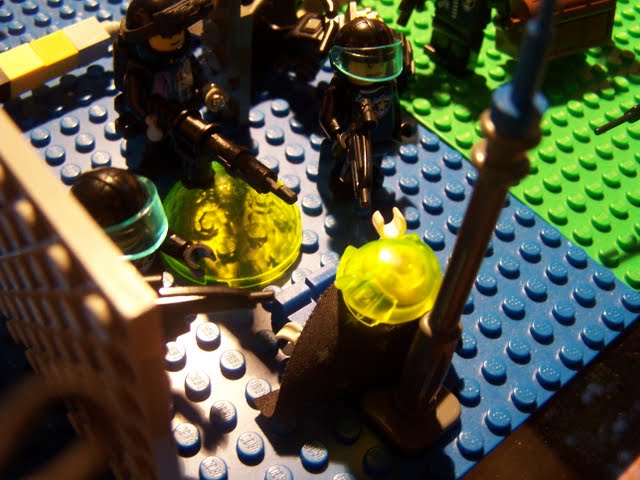 Oilhead comes to with a migraine, and three problems staring him in the face.

BANG.
As the size of an explosion grows, the number of social situations that it cannot resolve rapidly approaches zero.
Top

I wanted to get excited over it, but only one team took any casualties. No tension. No drama. I lost interest.

Should have had a pic of the whole battlefield, too.

Thanks for bringing the one-sided casualties to my attention.
Looking back at the field, I recall that Brikwater lost a sniper, a scout, and a rifleman. I'll see if I can adjust the OP accordingly.
As the size of an explosion grows, the number of social situations that it cannot resolve rapidly approaches zero.
Top

I was just curious

Was this you vs someone else? Or did you take both sides?
For Your Reading Pleasure: Rev's Battle Reports

It was just me, being as my only wargaming friend that has the traits required for Brikwars has yet to converted from Warhammer 40k.
As the size of an explosion grows, the number of social situations that it cannot resolve rapidly approaches zero.
Top

Collapsing buildings always make battles fun. I also like the guns you made for the Oilhead guards.
An army marches on its stomach, and its favorite food is fudge.
Top