The battle at Brikpass [HH Winner]

The battle at Brikpass [HH Winner]

You can put this image in OP because it was featured on the BrikWars news feed.

This is my entry for the halloween hellhunt. My older brother was visiting us on the weekend (he is 20 year old) and I persuaded him to play brikwars with me. Good thing he is an older brother, as he had the patience to play with me a rather big game with gore effects. Warning though! The report is quite long, so to keep you interested to keep on reading I'll show you a little taste of the report:

Usually Brikpass is a boring place where brikwussies hide from normal minifigs. But this day is different...

The leaders of two armies have decided to go through the pass on the same day! 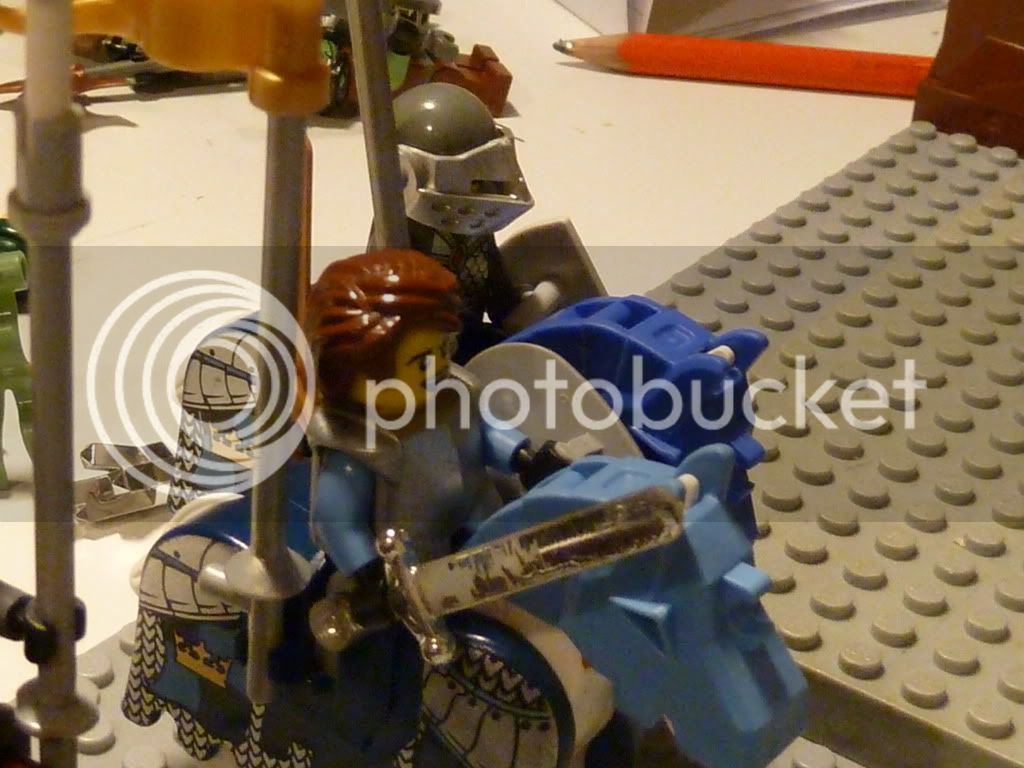 Count Shinypants: "Who are you, and why are you standing on the way of my army? We have important business to do on the other side!

The Dark Lord Krag Hag: "Me and my army are doing the same! Let us go first or die!

Count Shinypants: "Now now! We can pay for passage! No need for violence. How does 200 silver sound like?"

Necromancer: "I could get a new style for my beard with that sum!"

Vampire lord: "And I could rebuild my mansion!"

Players are not amused!

Count Shinypants: "Alright! Men, we are far better than those guys! We shall go first!"

Krag Hag: "We shall crush them like bugs! Get ready men!"

A little note: Every turn there are going to be reinforcements for both armies, until the we run out of them.

The armies line up against each other!

The count's right flank is protected by the harsh bull mercenaries and the Royal standard bearer. The banner grants +1 to skill to all friendly troops withing 4 inches.

The center is made of The count himself and four pikemen. The left flank consists of Buffly Puff the wizard, famous for his obsidian hand, his two adventurer bodyguards, a squad of spearmen and Sir Wolf, who can't be seen properly in this picture.

The Dark horde's left flank is manned by the Necromancer, a squad of the ferocious warriors of the north, and bolstered by a group of just raised skeletons.

The dark lord Krag Hag himself. He rides his fearsome wyrm.

A rather big force of orcs make up the right flank, led by a orc chieftain. The vampire lord is there too.

Turn 1: The Dark horde
Oh! I forgot to mention that I controlled the count's forces and my brother the Dark horde.

The whole left flank surged forwards. The necromancer took a better position on the hill.

Same on the other side too.

The vampire lord told one orc to stay though...

Meanwhile...
Count Shinypants: "Hey wiz, I just had the best heroic feat idea! Imma going to do it right on my turn! It's -"

It didn't work out.

Count Shinypants: "Alright...uhh....BRICKS FOR THE BRICKGOD!" This worked out too, +1 skill to friendly troops this turn.

The first attacks of the pikemen failed, but...

...the second line gets FIRST BLOOD! (if the orc isn't counted)

The leader of the bulls gets killed by an javelin accident. The other bulls prepare to make throws...

The flagellant skeleton is crushed.

On the far left side, officer from both sides bite the dust.

As Sir Wolf rides for the vampire his horse is brutally shlashed by orcs..

But Sir Wolf makes an epic roll and polevaults...

...kicking the vampire lord off his steed...

...and hijacking it for himself.

This dude critfailed his attack, and we thought that fleeing from the battlefield was fitting to his face.

The horde makes its own attack.

A massive riposte overkill is happening...

It crushes two skeletons, and threatens to kill a fellow bull!

Luckily he manages to parry.

In the middle two pikemen are savaged.

The orcs get wild!

One orc and one spearman are killed.

The wizard is attacked by the orc chieftain! He manages to parry the mighty blow.

The Necromancer is up to something..

A pack of scorpions appear behind the bull lines!

The necromancer's assistant moves towards the fighting.

Then it goes to the horse corpse..

And sucks the blood to itself, reloading its cannons.

The vampire lord is back on the game!

But only manages to chomp a sword.

Dark reinforcements arrive; scorpions, a war elephant with tribal warriors on it, and a force of perzian bowmen. 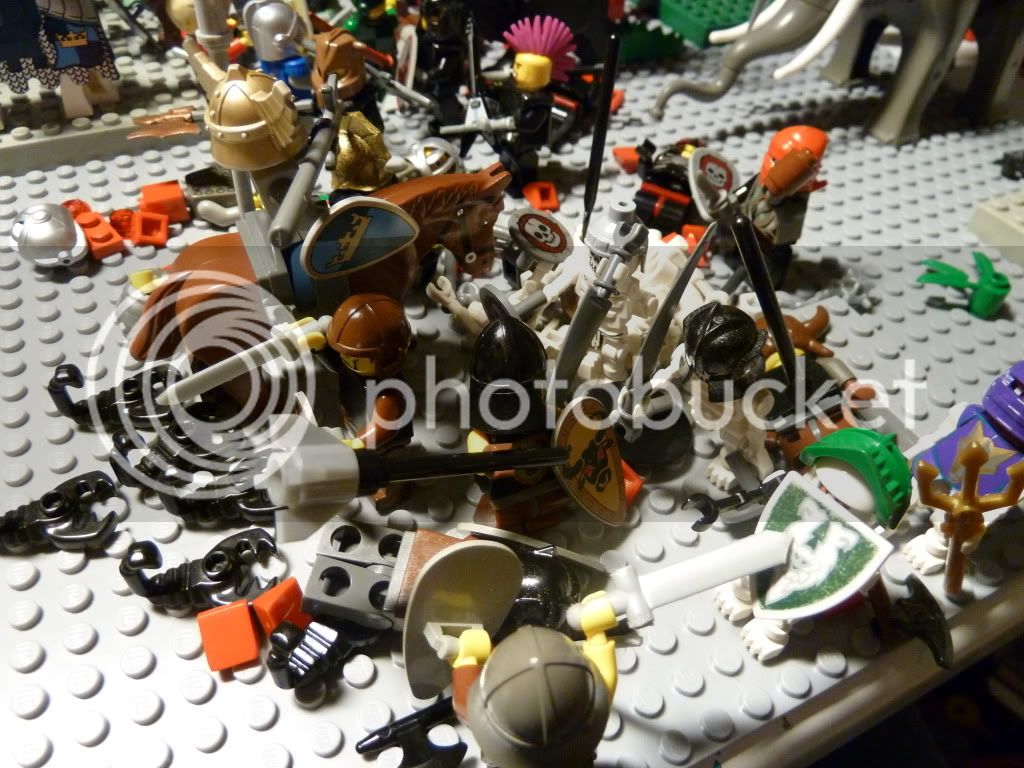 The bulls fight back bravely.

But two critfail: one falls on the scorpions and is bit to death, and the other's sword gets stuck on a skeleton.

The banner bearer grabs a pike and beheads a dark warrior.

Other attacks on the centre fail.

While the green adventurer gets his sword back he is disrupted.

The swirling melee between the spearmen and orcs continues.

One orc is killed.

He reappears behind the scorpions, killing one.

Reinforcements arrive! Two viking brothers and two royal guard. They also bring the coward back to the battlefield.

In the centre a warrior princess and her two maiden guard appear.

A squad of crossbowmen also arrive.

)
Sorry if you can't understand my talking.
Top

....and unleashes it upon the standard bearer! He is ripped apart by the magical blast.

The skeletons press on their attack.

The bull maceman and a skeleton are killed.

The scorpions are filled with bloodlust!

The last bull is mercilessly slaughtered.

These scorpions accidentally sting each other to death.

The Necromancer's assistant goes on the horse and proceeds to throw an explosive!

The other pack of scorpions scurry forwards.

The attacks on the centre are parried.

Krag Hag: "Mortal! I challenge you to a duel!"

Count Shinypants: "So be it!"

The victor of the duel receives +2 to skill for him and his forces for the next turn.

Krag Hag attacks with his flail, which gets stuck on Shinypants' sword. 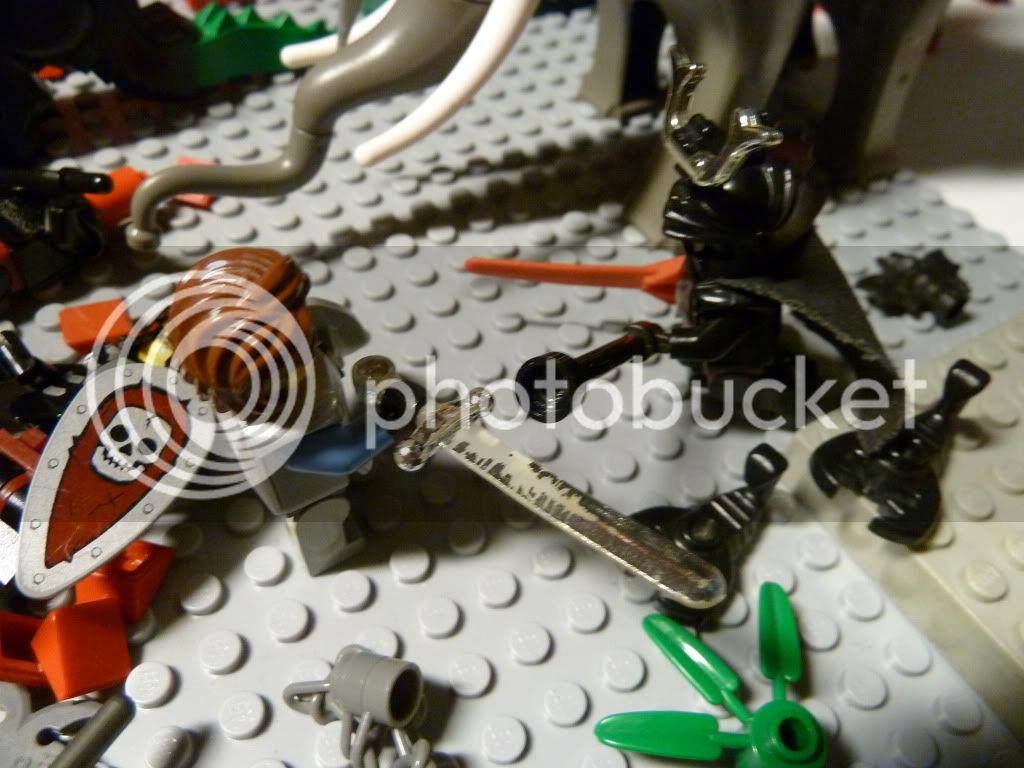 The flail is breaked.

The dice gods are not with Krag Hag today; his sword bounces off the count's shield.

Seeing his opportunity, count Shinypants beheads Krag Hag.
I miss the pics but the war elephant is not amused and flings Shinypants in the middle of the scorpions, who fail to kill him.

The blood demon sucks even more blood off. That thing has to be stopped before it takes all the gore effects away!

The perzian bowmen prepare to release a volley anytime.

The vampire lord remounts and grabs a lance.

Okay. I'm sorry, but it seems that I miss some photos. In general, orcs and spearmen are killed.

And attack, to no effect.

The assistant is beheaded.

Buffly Puff makes a grand dispel! No magic feats can be done for a turn.

Troops on the left flank attack!

But fail to achieve anything.

Same goes with the royal guard.

This viking is ready to throw axes on the right time.

Meanwhile, the count, either panicing or making skilled moves, swirls with his chrome sword.

Killing all of the surrounding scorpions!

The pikeman officers repositions himself.

And levitates a javelin!

Shinypants just manages to dodge it...

The skeletons collapse, the magic taken off from them.

The crossbowmen are assaulted by scorpions.

The bitter fight between the counts forces and the orcs continue!

Resulting in a dead viking.

This orc kills his comrade, probably by accident.

The wyrm gets a pike in its chest and is wounded while a dark warrior is killed by a riposte from a maiden guard.

These two can't manage to kill each other.

The elephant mauls a maiden guard.

Massive combined fire on the count! All missed.

The rest just line up.

The remaining viking gets impaled by the vampire lord.

The last crossbowman desperately tries to kill a scorpion, but fails.

The warrior princess makes the stunning light of the chrome sword blind the war elephant!

She flies to the middle of corpses.

The last dark warrior is assaulted, but he parries the incoming blows.

Nothing is achieved here. We demand violence!

Thats more like it! When the royal guard tries to get up he is cut in half by the orc chieftain.

Shinypants attacks the perzian leader, but fails to do any harm. 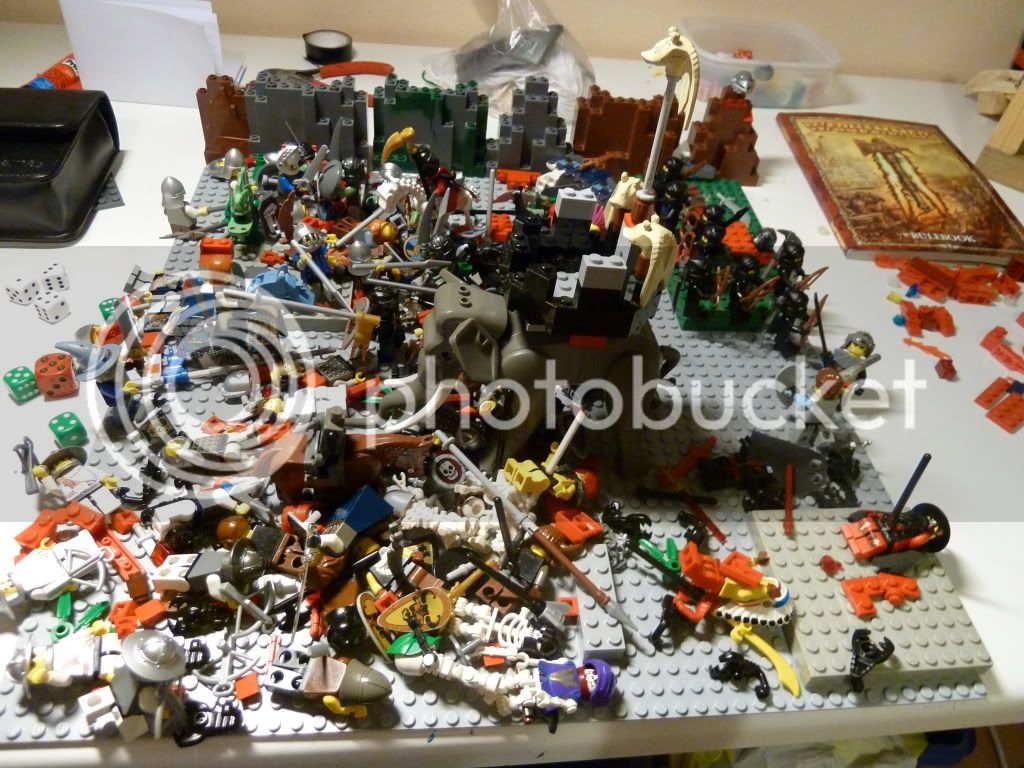 Overwatch of turn 4.
NO!THERE ARE NO POLAR BEARS IN FINLAND!!!

The elephant, now not controlled, shakes off the howdah...

The elephant then stomps off the field. Buffly Puff falls over, but is alive.

An orc is killed by a riposte and the pikeman officer is lanced.

A dark warrior gets the pike off the wyrm...

...but misses the maiden guard.

He, a dark warrior, a maiden guard and her horse are killed. The wyrm survives.

Another orc is killed by a riposte.

The last spearman is killed, and due to friendly fire so is the vampire lord!

The other group take ready themselves for a cc.

The last scorpions fail to kill the last crossbowman.

The orc chieftain is attacked from both sides!

He kills the attacking gnome and Buffly Puff's obsidian arm falls off.

That chieftain sure is tough!

The last scorpions are dispatched.

Shinypants gets up and sees a rather tempting formation.

He takes the javelin off the necromancer's corpse.. 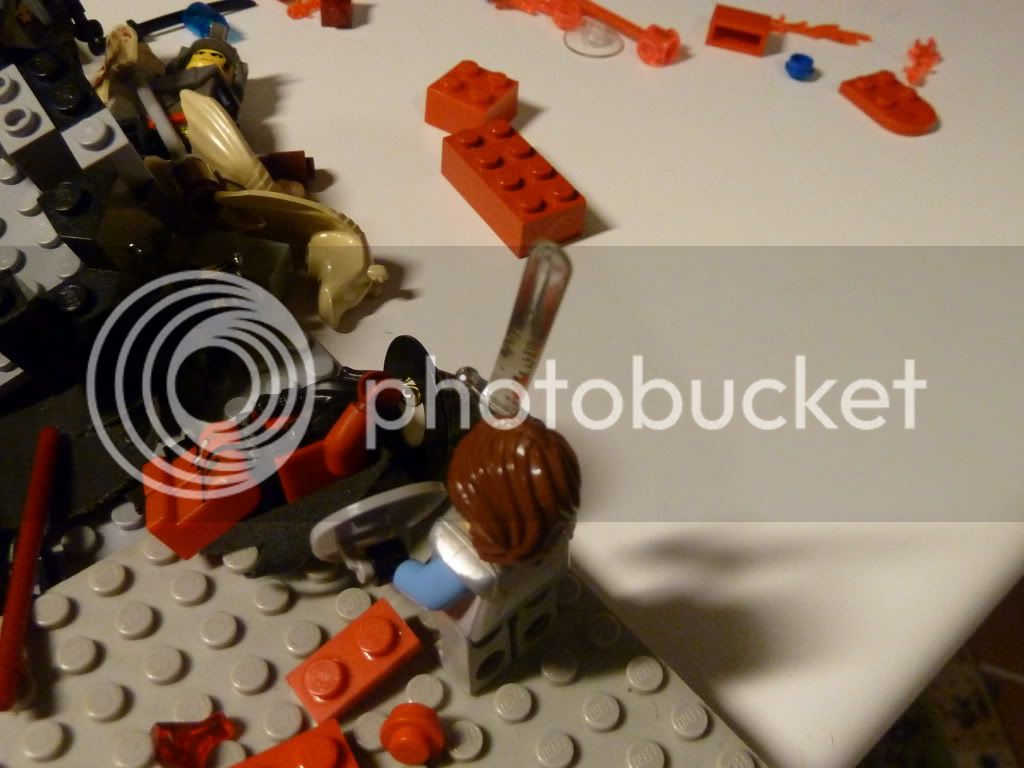 Overwatch of turn 5.
NO!THERE ARE NO POLAR BEARS IN FINLAND!!!

Go shinnypants
Only 2 things are infinite the universe and human stupidity, and I'm not so sure about the former- Albert Einstien.
Top

...but only manages to get the hat off the wizard's head, revealing a nasty surprise!

The wyrm attacks Puff but just rips off the gun.

Shinypants is assaulted but he survives

The wyrm is turned into an owl, which is crushed by the gun.

The royal guard goes for a perzian.

Help is on the way!

Overwatch of turn 6.
NO!THERE ARE NO POLAR BEARS IN FINLAND!!!

Turn 7: The dark horde (which isn't quite a horde anymore)

The two perzians somehow manage to kill each other (both critfailed).

...and shot the escape balloon of the elephant, which then fell on the unlucky perzian's back. The dark horde is defeated!

The survivors gather up.

And continue their journey! Little did they remember that they were going to besiege a castle. I doubt they can do it with this force...

That was the battle at Brikpass. I won, and both me and I brother were proud of the carnage. Hope you enjoyed too!

[/img]
NO!THERE ARE NO POLAR BEARS IN FINLAND!!!

This is easily my favorite battle report of all time. The fantasy genre is so much interesting to me than sci fi (says the guy with only sci fi posts).

The complete chaos in your photos captures the essence of what this game is really about. If I were a judge, then I'd declare you the winner.

Also you're from Suomi, and that's a step ahead of everyone else.
Top

This? This is total win. Judges get in here
Top

Killer Karetsu wrote:Oh! I forgot to mention that I controlled the count's feces